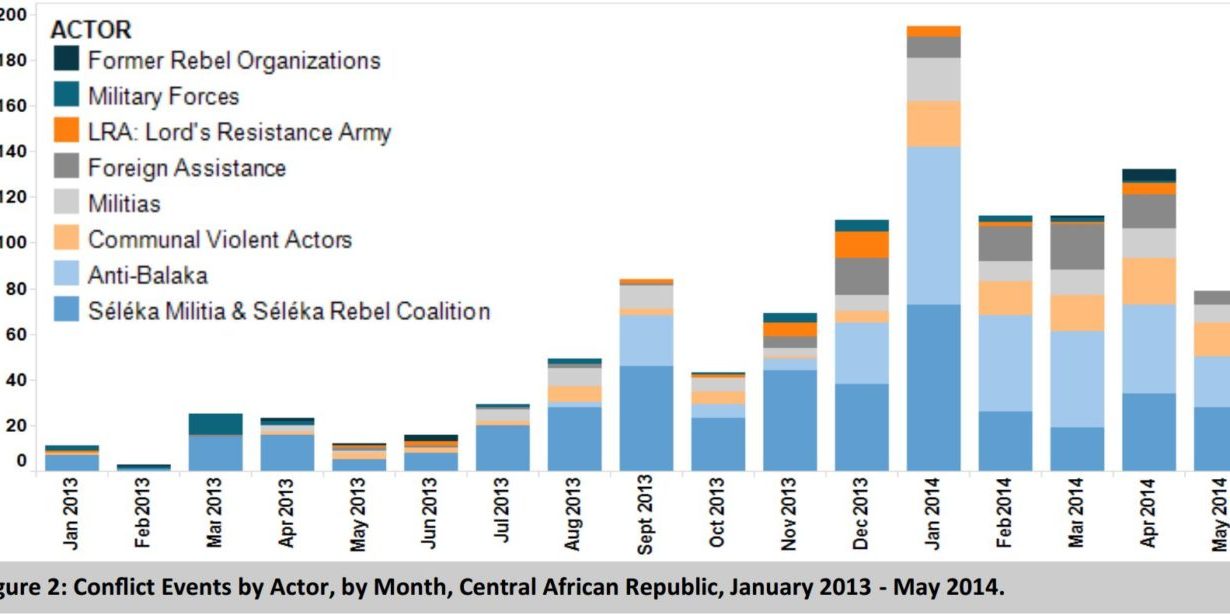 Conflict levels fell in CAR in May (see Figure 2), and several changes to the conflict in CAR represent the beginning of a new phase: first, the government continues to have little to no role in what is occurring within the state, or indeed – as the attacks in Bangui last week attest – government forces have little to no control in the capital. While the government was hand wringing about moving Muslims out of the city, the main armed groups returned to their origin points and prepared their combatants.

Second, Séléka has re-grouped, and is now led by Joseph Zindeko, a resident from the North-east region and one of the original leaders of the Union des forces democratiques pour le rassemblement (UFDR)- a group that emerged in 2006 and signed an empty peace agreement in 2008 for DDR that never arrived. There is still little to report about the aims of the group and its leaders, fragments or plans, but alternative reports cite the group as ‘uncontrolled’ to ‘having established an alternative to the state’ in and around Bambari, their new reported headquarters.
Third, Séléka has always been a mix of fragmented, and competing, opposition interests, and the choice of new leader may be one reason for the new ‘break-away’ group reportedly intending itself to be its replacement. A new group – the Organization of Central Muslim Resistance – established in late March 2014, claims to have 5000 armed men, gleaned from former President Djotodia’s former rebel group Union of Democratic Forces for Unity, Movement of Freedom Fighters of Central Africa for Justice and the Islamic Youth Organization. The first was a member of the Séléka Union while Djotodia ran the group, the recent histories of the second and third organizations are not known. The OCMR, if it actually exists to anyone besides its leader (Djotodia’s former Tourist minister) Abakar Sabone, has not actually been involved in any reported acts of violence.
But perhaps the further ‘Islamification’ of this dispute is exactly what is required to get the international community involved in what has been over 18 months of quite brutal, unrestrained and intense violence in a state without a functioning government. 25% of the population is believed to have moved in response to the violence, and Muslims in the capital and elsewhere in the South are hunted or have moved on. The religious communities were a last hope of peace and care in CAR, but the attacks last week on IDP camps in church areas suggests that there really are no more rules left. Given the reluctance of the international community to become involved, this conflict may be on the brink of getting much worse in future months.