What do the Mpeketoni attacks say about conflict in Kenya? 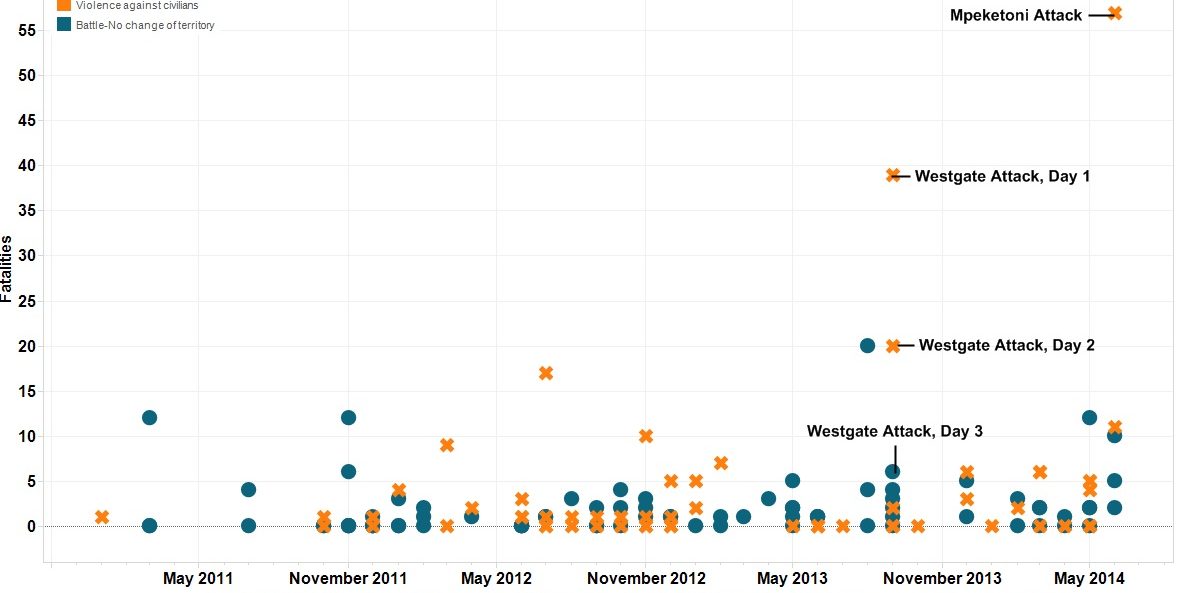 Both conflict events and reported fatalities increased in Kenya this month, with the most intense violence associated with an attack on civilians in Witu, Lamu island, in Kenya’s Coastal region. The attack incorporates several key complex dynamics in contemporary Kenyan political violence, each of which is worth unpacking in turn.
The first is the spectre and threat of Islamist militancy. While Al Shabaab has claimed responsibility for the attack, as with the attack on Westgate in September 2013, some analysts are suspicious of this claim. The attack does not fit the profile of typical Al Shabaab attacks in Kenya, which have generally fallen into one of three categories since 2011. The first category is fairly persistent, but low-grade attacks on security forces (police and military) primarily in the former North-Eastern province near the border with Somalia. The second, sporadic, but generally low-intensity, attacks on civilians either along the coast in Mombasa (where tourists have been targeted), or in Nairobi (where nightclubs and minibus stands have been targeted), usually with low-sophistication grenade attacks. The third is high-intensity, high-profile attacks intended to garner public attention, such as the Westgate attack in Nairobi (see Figure 1 for an illustration of the clustering of events by event type and fatality rates). While the Mpeketoni attack might constitute an evolution and escalation of previous forms of violence, it is certainly a new strategy for the group if it is in fact responsible; and one which warrants closer analysis of the factors which contributed to and drive this intensification.

If the group is not responsible, but has strategically claimed responsibility for the attack in order to increase its perceived presence and capacity in Kenya, this points to a very different trend. Conventionally, the attribution of responsibility for violent conflict to Islamist groups has been driven in part by state interests in engineering an image of a state under siege by Islamist radicalism, in an effort to position themselves favourably in relation to western interests (for example, as some have argued is the case in Mauritania and Algeria); and de-legitimise and de-politicise the claims and grievances of opposition groups by branding them as terrorists (for example, through the association of Tuareg and other northern communal groups active in Mali which were variously, loosely and inconsistently aligned with Islamist militants in the area). This is not to deny the reality of Islamist violence as a growing phenomenon across Africa; but rather to highlight the potential political and strategic motivations for its labelling. By contrast, if Al Shabaab strategically claims responsibility for attacks in which it had no part, we are witnessing the reverse: the acceptance of responsibility as part of a strategy in which the militants seek to amplify their impact, their perceived global reach and their capacity.
The second dimension of Kenyan conflict highlighted by the attack is the tension between central and county control in Kenya. The President has rejected claims that Al Shabaab were responsible for the attack (in spite of the group’s claims of responsibility), and instead saw the Lamu Governor Issa Timamy arrested on terrorism charges (bailed on the 30th of June). It is a surprising move in a context in which the state has previously extremely ready to attribute violence to suspected Islamist militants, even when no claims of responsibility are made. If nothing else, such a willingness to by-pass the state’s preferred public enemy in favour of local politics points to the complex political tensions at play in the investiture of power in local counties. The devolution of power to county level under Kenya’s 2010 constitution has often been presented as a panacea to the communal and local conflicts which pitted communal – primarily ethnic – groups against one another in a zero-sum game of demographic arithmetic contesting central power. The reality in some – but not all – counties, has in fact been the reverse: the devolution of power in areas with diverse ethnic and communal demographies has in some cases been accompanied by the devolution of violent conflict between these communities. In effect, county-level power has created yet another basis on which communal groups compete with one another for power, rather than presenting an alternative in which the pressure of competition was reduced. Cyclical violence between Pokomo and Orma ethnic militias in the former Coastal Province’s Tana River county in late 2012 and early 2013, which claimed over 150 lives, is one reflection of this dynamic; while persistent inter-communal conflict in former Eastern Province’s Marsabit is another.
Combined, these features point to a third dimension of Kenya’s political conflict, which is the fluid and changing nature of communal violence. Early reports of the Mpeketoni attack indicated that ‘non-Muslims’ were singled out by the militants, while the President insists that ‘local political networks’ were to blame, and that the majority of those targeted were ethnic Kikuyus (see BBC News, 18 June 2014). These claims can both be true: religion and ethnicity overlap in many, though not all, of Kenya’s communal groups. What growing Islamist violence in Mombasa, Kwale, Eastleigh and the north-east point to is the privileging of one of these identities over another. That many predominantly Muslim ethnic groups have historically been politically and economically marginalised, in part because of their smaller number, may create incentives for the mobilisation of collective action around increasingly religious, rather than ethnic bases.
Whenever Kenya is featured in ACLED’s Conflict Trends reports, the multi-dimensional nature of the country’s sometimes discrete, sometimes overlapping security challenges is emphasised. Events this month are sadly illustrative of this phenomenon (see Figure 2). In the month that a suspected Islamist attack dominated headlines, other dynamics were underscoring the volatility of the political context throughout the country: Kenya saw the highest number of riots and protests to date this year, involving a diverse range of groups from disaffected traders protesting the demolition of stores in Nakuru, to  demonstrations against government landgrabbing in Kajiado, to protests against electoral procedures in Kiambu and Kwale. Elsewhere, inter-communal conflict in Baringo and Turkana claimed at least six lives. Ultimately, while the dynamics of Islamist violence in Kenya certainly pose one of the most serious threats to stability and security in the country, it is by no means the only one.