Riots and Protests in Egypt after the November 2013 Protest Law 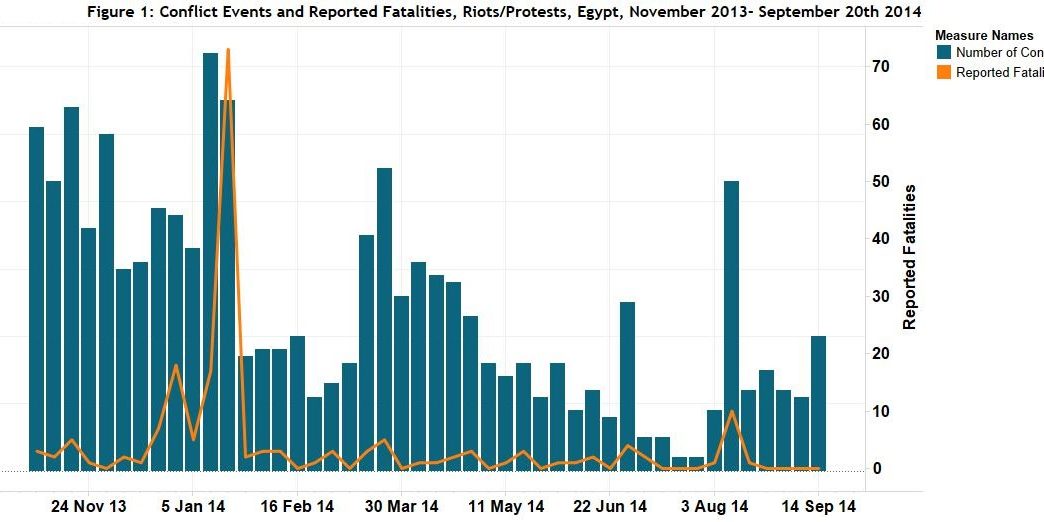 Nationwide hunger strikes across Egypt have grabbed international media attention in September as political activists, journalists, detainees and lawyers continue to campaign against the Egyptian protest law introduced in November 2013. The protest law is seen by hunger strike participants as a limitation on basic principles of freedom and a restriction on the right to peaceful assembly. Enacted by the interim President Adly Mansour, it was justified as a mechanism to bring stability to Egypt after the street protests that took place after the ousting of Morsi (The Guardian, 24 November 2013). However, many viewed it as granting the security forces discretionary powers to violently repress protests.

Overall, riots and protest events have decreased since November 2013 (see Figure 1). One explanation for this drop is the increasing barriers to collective action and the organisation of social movements since the Muslim Brotherhood was designated a ‘terrorist organisation’ by the Egyptian government in December 2013. This has led to police forces conducting routine drag-net arrests and detaining Muslim Brotherhood members, while heavy prison sentences have been given to political activists who have violated its terms. This has applied pressure to the coordination of collective action nationwide with a decline in the frequency of demonstrations, especially those held in Cairo (see Figure 2). Similarly, following the violent dispersal of Cairo protest camps in August 2013, less-mobilised political groups may be reluctant to engage in sustained government opposition, due to fear of being subjected to violence.

Interestingly, since the introduction of Egypt’s new protest law, overall levels of demonstrations have dropped, and there has been a switch in the event dynamics from largely peaceful protesters demonstrating without any engagement with police forces, to an increasing proportion of Riots/Protests involving clashes between rioters and state forces (see Figure 3). In July and August 2014, this was the most common interaction associated with demonstrations, occurring in almost half of all recorded Riots/Protests events, although rates of clashes in September to date have been lower.

These patterns appear to validate concerns among civil society and human rights organisations that the legislation would prompt greater restrictions on the civil liberties of Egyptian citizens, although there is less evidence that security forces have acted on a feared “free rein to use excessive force, including lethal force, against demonstrators” (Amnesty International, 25 November 2013). Whilst it certainly seems that the protest law has acted as a deterrent to participation in protest movements, it may be that this has had more to do with mass detentions and perceptions of police violence than a subsequent increase in violent state repression of peaceful protests. Restrictions on demonstrations and assembly may also have catalysed greater violent action by demonstrators themselves – itself, a prospect that could undermine stability – but a clear pattern of increasing violence against peaceful demonstrators is not strongly evident in the data.