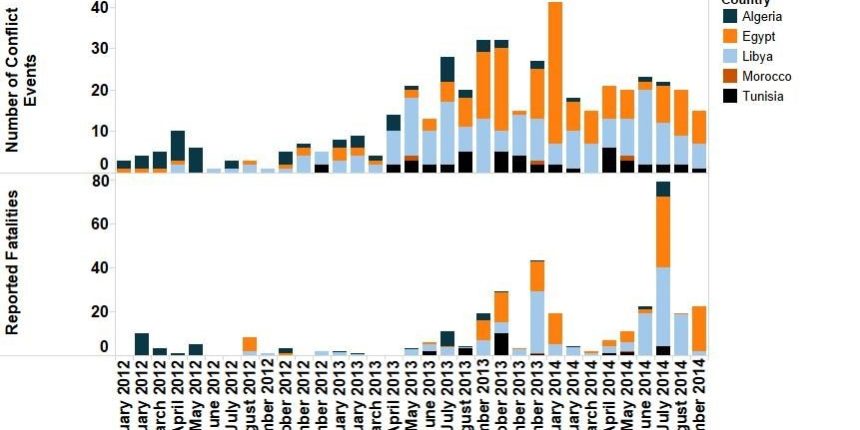 While the Arab Spring was lauded as a triumph of democracy by various Western politicians, the response from security analysts have been more ambiguous (CNN, 28 May 2011). There have been concerns that the dramatic shifts, or outright disintegration, of existing power structures could aid international and domestic conflict, particularly within the region (BBC News, 22 June 2011). One measure of whether instability has increased is in the use and rate of ‘remote violence’, here defined as bombings, explosions and otherwise remotely activated modes of violence against both armed agents and civilians. Have bombings increased in the region in the three years since the initial protests in Tunisia instigated the Arab Spring? And do the patterns of bombings within individual countries bear any reflection on a state’s political transition?

Every country, with the exceptions of Algeria and Morocco, have seen an increase in the number of events and fatalities from bombings since 2012. Figure 1 shows the number of conflict events and reported fatalities involving bombings, IEDs, mines and remote-controlled explosive devices by country.
Both Algeria and Morocco were notable for retaining their current leadership through 2011. Morocco’s King Hassan IV held onto power by reforming the powers of the monarchy while Algeria’s Boutiflika retains power through suspect elections (Economist, 19 April 2014; Totten, August 2014). While Morocco has instigated a gradual transition, Algeria has maintained the status quo. The conciliatory nature of the Moroccan leaderships’ reforms and the controlled implementation of change seems to have worked, Morocco continues to have the lowest incidence of remote violence attacks in the region (figures 2 and 3).

Algeria was the site of the highest number of bomb attacks and remote violence in 2012. But the country now has the second lowest number of attacks. While Boutiflika’s maintenance of the status quo has not necessarily placated the population, bomb attacks remain a threat, Algeria has not undergone the same dramatic increase in remote violence witnessed by its neighbours to the east.

Tunisia and Egypt have both seen the formation of contested governments which are rejected by a portion of the population. Tunisia’s administration is not recognised by certain religious insurgents (Allani, 2 November 2013). In Egypt Ansar Beit al-Maqdis, which previously focussed its attacks on Israel, turned its violence against the state after the ousting of President Morsi (BBC, 24 January 2014). In both Tunisia and Egypt, remote violence shows a spatial concentration within specific regions. In the case of Tunisia, attacks are focused in the mountainous Kasserine region where the current insurgency is confined to the periphery. Egypt has a similar trend with a clustering of attacks within the northern Sinai but militias are still able to launch multiple attacks within the cities populating the Nile.

Figure 4 shows that for Tunisia and Egypt, the majority of interactions involving bombs and other explosives are between state forces and political militias. This reflects that in post-revolution Egypt and Tunisia, the main point of contention is the legitimacy of the rulers and whether the current government is the desired outcome of the Arab Spring.
Libya represents a dramatic contrast to all other countries in North Africa, both in the level of violence and the actors. Figure 4 shows that Libya’s conflict between rebels and political militias is for access to state power. Libya’s two rival parliaments– the House of Representatives and the General National Congress– are currently involved in a contest for political control of the country (ACLED, 15 October 2014). Furthermore none of the politically aligned militias are strong enough to rule the whole country, but continue to battle each other for strategically important territory (Pack and Smith, 19 October 2014). This political situation is mirrored by the concentration of bombings within the two centres of political power within Libya: Tripoli and Benghazi.