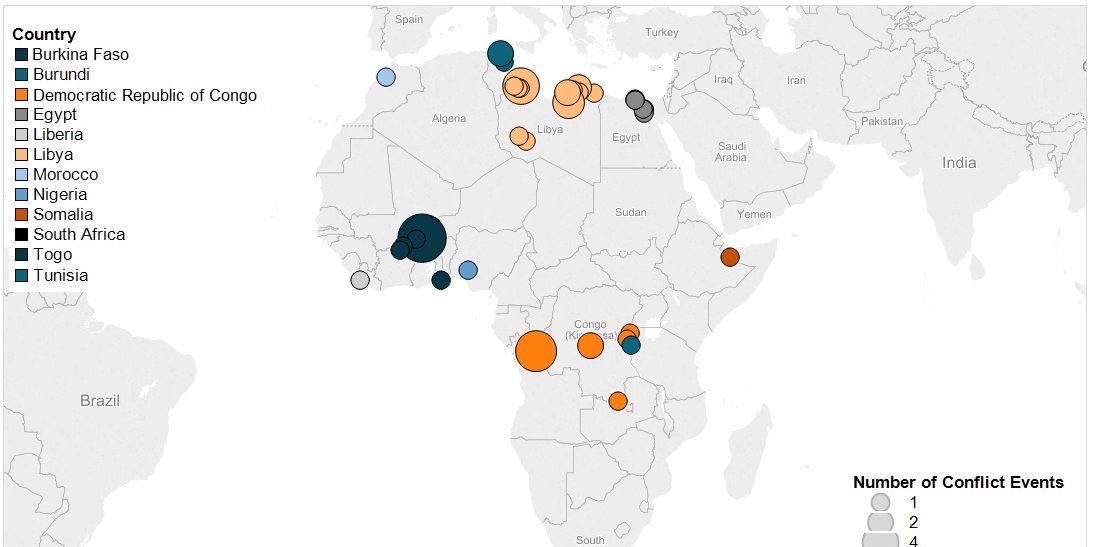 “Authoritarian regimes…breakdown in systematically different ways, and they also affect post-transition outcomes” Geddes (1999: 6)
The recent civil disobedience activity in Burkina Faso to oust President Blaise Compaore, following an attempt to extend his 27-year long term (BBC, 30 October 2014) highlights the success of civil society movements in mobilising for regime change. Riots and protests against incumbent leaders who attempt to strengthen their institutional capacity have been reported in 12 African countries in 2014, with Burkina Faso, Democratic Republic of Congo, Egypt, Libya and Tunisia experiencing the highest demonstration levels (see Figure 1). Whilst these protests embody multiple, overlapping grievances, including high unemployment rates, poor infrastructure and swelling food prices (BBC, 30 October 2014), the eruption is catalysed by the extension of parliamentary mandates or the revision of a country’s constitution in an effort to preserve the elites’ position. However, the post-transitional societies can be characterised by high, if not higher, levels of unrest than the previous regime.

Threats to autocratic leaders from civil society uprisings can initiate a variety of responses from the government in power. Protesters may be met with repressive force from the state apparatus as the leader attempts to hold on to authority, alternatively, dissidents may receive short-term concessions to placate their demands. However, since the beginning of 2014, less than 7% of riots and protests against constitutional amendments entailed violence directed towards peaceful protesters, and 63% of events involved individual action by peaceful protesters (see Figure 2). This lends support to Stephan and Chenoweth’s (2008) notion that opposition movements choose non-violent means over violent strategies to achieve effective systemic change. But in order to refute the assumption that governments use repression against protesters, further analysis into the destabilising effects of the opposition would need to be clarified to discern whether the protest movement posed a significant challenge to the state.

A large body of research focuses on repression-mobilisation interactions that structure the repertoires of contention by collective actors during periods of initial unrest (Lichbach, 1987; Moss, 2014). However, the transitional environment left behind in the wake of regime change can create equally unstable political conditions for a population, shaping the future conflict dynamic. It is not simply the response of the leader to the immediate bottom-up challenge that determines the course of political violence, but a complex set of socio-political circumstances that were present before and during their tenure that impacts on regime transitions to alternative government systems or democracy.
For example, processes including amending the constitution, setting of election dates and the appointment of an interim government, create political opportunities for elite groups to exploit, as a number of parties competing for power can drive further tensions and undermine a coherent transition. This was witnessed in Egypt in November 2012 when Mohammed Morsi granted himself immunity in a constitutional declaration that led to vast street protests (The Guardian, 22 November 2012). But the responses to these political openings are also conditioned by the pre-existing political landscape.Egypt has been shackled by its authoritarian legacy where the consolidation of power by competing groups has overshadowed a coherent transition phase (Brown, 2013). Kausch (2012) identifies that through their relative marginalisation from formal politics during the Mubarak regime, the Muslim Brotherhood focused on influencing grassroots networks which created a highly organised movement. When an opportunity to be included in the formal legal decision-making arose following Mubarak’s ouster, they consequently reacted to elections as a zero-sum game, dominating the constitutional assembly that was unrepresentative of Egyptian society (Brown, 2013). This bred mistrust amongst liberal political groups and has severely hampered Egypt’s transition after the Arab Spring.
References