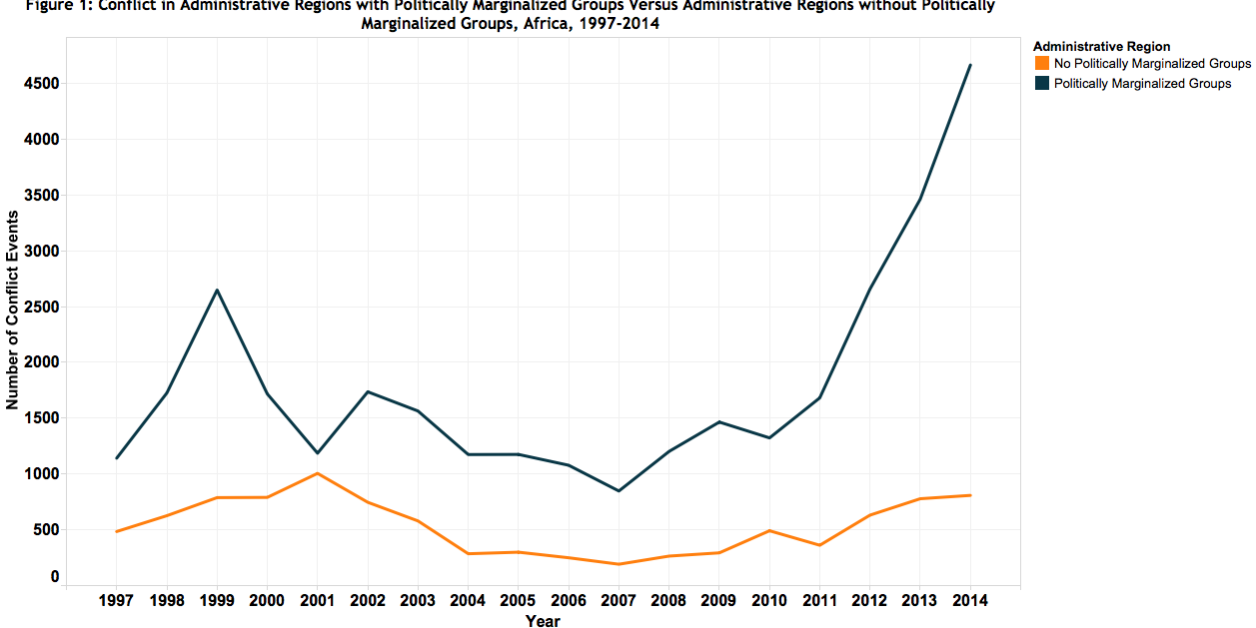 The growing role of inequality has been at the forefront of many development agendas recently – for example, at the IMF and World Bank annual meetings last month – as inequality decreases between countries while continuing to increase within them.  Political patronage-systems – where those in power use public (state) resources for personal gain (e.g., to reward individuals for their electoral support in order to remain in favor) – are common in most African countries. While patronage is most commonly thought of as direct transfers of money (Associated Press, April 23, 2013), it can also take the form of jobs, business opportunities, access to markets, or even promises of developmental assistance to communities (Beresford, 2014).
Systems in which some individuals are favored over others contribute to inequality within states. This can become problematic when certain regions (e.g., leaders’ home areas, or areas home to ethnic kin) receive benefits to a (much) larger extent than other areas. In these systems, politically marginalized groups – ethnic groups that are powerless in the political arena through a lack of having an ethnic kin in a leadership position, or are actively discriminated against in the political sphere – are likely to have high grievances.[1] These grievances may ultimately manifest into conflict and instability, especially given that shared economic and ethnic polarization may help facilitate mobilization for conflict and collective action (Østby, 2008).

Large administrative regions within African states that house politically marginalized groups (powerless or discriminated)[2] tend to see more conflict than administrative regions that have not housed these groups (see Figure 1).  This trend has been becoming increasingly alarming in recent years, with the difference in the level of conflict seen between these regions at its highest point.

In line with the growing push in highlighting inequality, Oxfam launched their inequality campaign last month, stressing the growing inequality that characterizes much of Africa. In their published report, they provide the example of Nigeria – one of the world’s fastest growing and most populous developing economies – and point to its increasing inequality, especially income inequality wherein the richest 10% of the population are getting richer while the poorest 40% get poorer (Oxfam, 2014). Figure 3 shows how, similarly, conflict has been increasing in Nigeria, especially in regions that have housed politically marginalized groups (groups which tend to have less access to business opportunities or access to markets), suggesting that as inequality continues to grow, conflict too may follow.
Inequality within states is not a problem unique to Africa or developing states, and can be seen worldwide in a range of economies. However, while disparities in income/resources can slow the pace of poverty reduction (Kofi Annan, 2012), in an environment where this inequality lies along group cleavages – e.g., in many African states where inequality is largely fueled by patronage flows lying along ethnic cleavages that can offer a mobilization mechanism to the aggrieved – it can also contribute to conflict, which can in turn further hamper development goals.

[1] Politically irrelevant groups – small groups with few opportunities to ally or aggregate into a nationally relevant group for political contest – are not included here.
[2] Data from the GeoEPR project and other African sources (see Raleigh, 2014).