Tunisia Presidential Elections: a fresh start or “in with the old”? 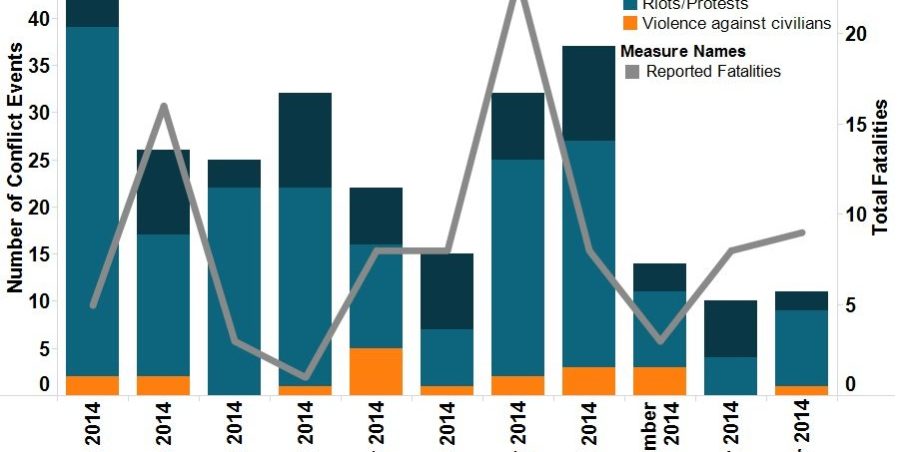 On Sunday, Tunisia observed the first round of presidential elections since the 2011 revolution, with a 62.9% turnout. Despite the Tunisian authorities deploying 80,000 security forces across the country to face anticipated unrest (Al Jazeera, 24 November 2014) the elections were not marred by violence, reflecting their open and inclusive nature. Conflict levels have remained low since September 2014 (see Figure 1). Polling results from The Superior Independent body for Elections (ISIE) confirmed a second round runoff in December with neither of the leading candidates securing a majority of the vote. But for all the election fervour and optimism that surrounds these elections, a distinct lack of fresh political thought appears to have emerged in Tunisia’s transition and economic concerns continue to dominate the political agenda.

The two front running candidates are Béji Caïd Essebsi, the leader of the secular Nidaa Tounes party and current interim president Moncef Marzouki who is standing for re-election. Béji Caïd Essebsi has been criticised for his ties to the ancien regime, holding the position of Minister of Foreign Affairs under the Bourguiba regime and other positions under Ben Ali. Many fear that his wide support from established political elites will lead Tunisia back into authoritarian rule, or what has been referred to by Tunisians as a process of “in with the old” (BBC News, 30 October 2014). Marzouki on the other hand has support of the Islamist Ennahda party and stands in strong opposition to the Ben Ali regime, but is hampered by a fairly clumsy term as interim president.

With economic demands on every Tunisian’s lips, Essebsi’s appeal lies in his offering of stability, which will likely boost foreign investment. The poor state of the economy has been used to explain how over 3,000 Tunisians have joined the ranks of the Islamic State to fight in Iraq and Syria (Washington Post, 11 October 2014). However, the ACLED dataset reveals that internal militancy has been declining since August 2014 (see Figure 2). This may signify that whilst members of society continue to be dissatisfied with living standards, they are utilising conventional national political channels to express their concerns rather than taking up arms. This further prompts a re-evaluation of the factors driving Tunisian’s to be recruited by IS from a purely economic understanding.

Yet, have economic demands overshadowed a long-term political process in Tunisia? A 2014 report by Pew Global revealed that 59% of Tunisians “say they should rely on a leader with a strong hand to solve their country’s problems” with a decline in support for a democratic government (down from 54% to 43%) (Pew Research, 14 October 2014). This has been coupled with a strong increase in preference for a durable economy that creates opportunities and allows small businesses to flourish.

According to the Wall Street Journal, in Sidi Bouzid – the ‘birthplace’ of the Tunisian uprising – residents displayed support for Mohamed Hechmi Hamdi, a longshot for the presidency. His policies directed towards free health care and the unemployed show the immediate demands and meaningful change that some Tunisian’s feel is absent. Similarly, Slim Riahi, a wealthy businessman, gained populist support by pledging jobs to tackle youth unemployment if people voted for him (Africa Confidential, 21 November 2014). Although both candidates received a fractional 5.75% of votes respectively, should the new president not drive tangible change that is felt equally by Tunisians, then the relative lull in protest action witnessed since September could be replaced by a new wave of protests that erupt across multiple cities.