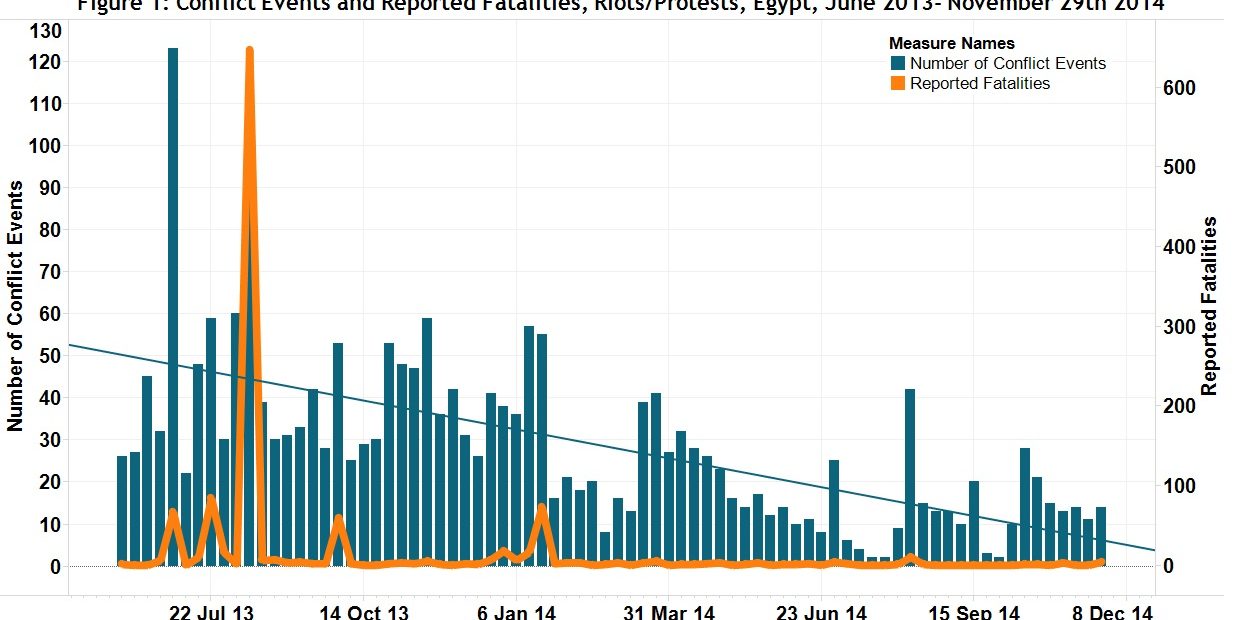 A cursory glance at Egypt’s conflict landscape from the beginning of the revolutionary uprising would infer that overall, riots and protests have followed an upward trajectory with increased participation, mobilisation and dissent against the regime (see Figure 1). However, the transformation of contentious politics in Egypt is best understood by conceptualising three distinct timeframes of activity. These are: (1) the period leading up and including the initial uprising on 25th January 2011 (from the years 2010 – late 2012; (2) a second wave of more intense mobilisation from early 2013 – December 2013; and (3) a dramatic reduction in riots and protests (from the beginning of 2014 – present day (see Figure 2).

Each of these periods witnessed changing forms and intensities of collective action in response to key state policies introduced by the Egyptian government and emerging non-state groups such as Ansar Beit-al Maqdis, an Islamist militant group largely operating in the Sinai Peninsula. After the second quarter of 2013, protests declined, immediately being replaced by more violent acts of rioting. This drop in protest activity continued up to the third quarter of 2014 where they fell to their lowest levels since late 2010, constituting under 15% of all political events in Egypt. This trend occurred concomitantly with higher levels of militant activity in the country (see Figure 3).

To understand why we witness this pattern of decline, it is important to explore at least one of the driving forces catalysing this change – the role of key state policies in shaping political opportunity structures for nonviolent and violent conflict actors. This is not intended to provide a comprehensive explanation of all the prevailing factors that condition levels of violence. Rather, by highlighting one important facet that can explain both short and long-term fluctuation in conflict dynamics in the three year period following the massive protests in Tahrir Square, it may be possible to offer insight into future patterns of political violence.

A previous report (ACLED, 24 September, 2014) identified that after the November 2013 Protest Law and December 2013 designation of the Muslim Brotherhood as a ‘terrorist group’, a dramatic reduction in protest levels occurred. Interestingly, this did not coincide with a significant increase in state force activity to crush protests, but can instead be explained by heightened barriers to collective organisation and increasingly severe repercussions for participation. Al-monitor described this state response as “one of the most vivid examples of the regime’s war on everything and everyone deemed revolutionary.” (Al-monitor, 9 September, 2014).
More recently, both protests and riots feature less as repertoires of contention for social actors, and leading up to the final quarter of 2014, political militias have taken on a more prominent role in Egyptian conflict. The mechanisms by which this change has occurred require further analysis to determine whether a climate of suppression executed through policy has prompted individuals that deem their nonviolent actions ineffective to switch tactics to insurgency. One such group, Ansar Beit al-Maqdis, have stepped up their activity in recent weeks with a coordinated attack against the Egyptian army leaving over 30 dead. Having recently changed their name to ‘State of Sinai’ after pledging allegiance to the Islamic State, the group regularly claims they act in response to state repression of protesters following the ousting of Mohammed Morsi in 2013.
With this in mind, Egypt’s cabinet was pushing through a draft anti-terrorism law in late November that would almost certainly dampen the fires of the revolution to little more than embers. By designating ‘terrorists’ as “any organization…which practices or seeks in any way to disrupt public order or exposes society’s integrity, interests or security to harm” (Reuters, 26 November 2014), Egyptian authorities application of the law will have the power to completely paralyse the organisation of many political groups. The impact this has on recruitment drives for political militias will require monitoring, but as Egypt continues to blur the boundary between nascent collective groups that peacefully promote social and political change, and violent militants conducting an insurgency, it is increasingly likely that social movements will be written out of the revolutionary process altogether.