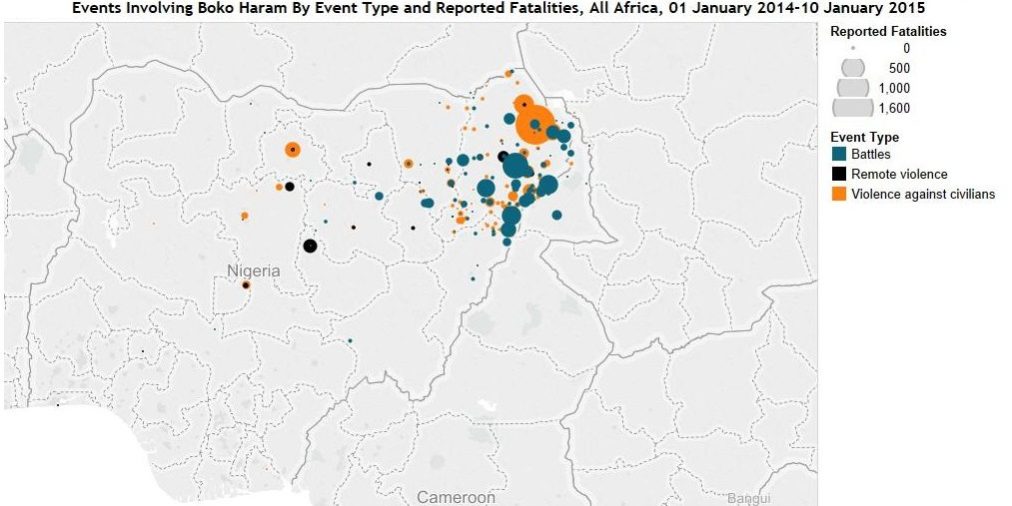 Boko Haram continues to be one of the most high-profile and lethal conflict actor within the West Africa. The group has developed into a transnational actor and is active in Nigeria, Cameroon, Chad, Mali and Niger. Boko Haram is also notable for the scale of its attacks on both state and civilian targets, with the latest being a military victory and civilian massacre at Baga. Conflict events involving Boko Haram were responsible for 48.17% of the recorded fatalities in Cameroon and 33.44% of the recorded fatalities in Nigeria in 2014.

Below are a list of resources to aid in the analysis of conflict dynamics involving Boko Haram, including blog posts, reports and ACLED data.

ACLED Boko Haram Monadic File (Updated 10th January 2015)
A monadic file providing data on all events involving Boko Haram. For a discussion of the difference between monadic and dyadic files, please see the User Guide below.

ACLED Guide and FAQs for Media Users
A document which provides an overview of the ACLED project, the structure and content of the data, and addresses frequently asked questions.

Working Paper on Nigeria’s Boko Haram and Uganda’s LRA – Some Parallels
An analysis of Boko Haram activity in comparative perspective with other violent groups on the continent.

Country Report on Nigeria
A report from mid-2013 covering violence in Northern Nigeria, militancy in the Niger Delta, urban protests and communal violence within the Middle Belt region.

Previous Crisis Blog Posts
The following blog posts provide varying insights into patterns of Boko Haram activity and analysis of the political context of the Boko Haram insurgency.
Boko Haram Activity Since the Nigerian Government’s Announcement of the Ceasefire

The Nigerian Elections and the Politicisation of the Boko Haram Insurgency

The following reports have been published in the past two years, providing analysis of various aspects of Nigeria’s conflict dynamics, and the activity of Boko Haram specifically.
September 2014
July 2014
June 2014
March 2014