Political Militias and Remote Violence in 2014 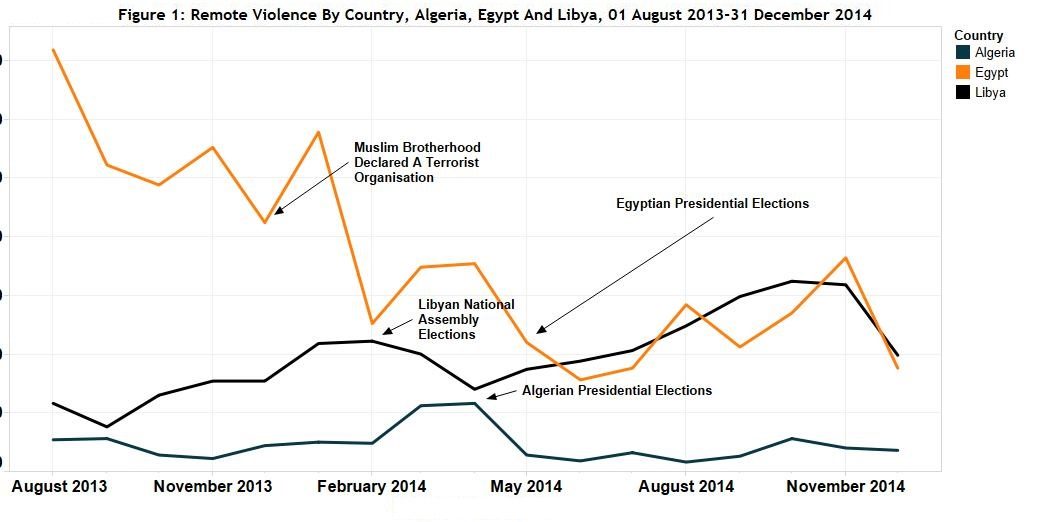 Version 5 of ACLED carries a new event type termed ‘Remote violence’. Remote violence is an event where a conflict actor engages another group while remaining spatially removed from the area of attack. This can take the form of improvised explosive devices, air strikes, rocket attacks and bombs. In Africa, the use of these methods by various conflict actors has grown exponentially with remote violence accounting for 8.93% of recorded conflict events in 2014, up from 0.95% in 2005. One reason for this increase is likely the growth of political militias as the dominant conflict actor in modern African states and the decline of the heavily armed rebel group. Political militias are now involved in 22% of conflict events and account for 37% of all events involving remote violence. Particular forms of remote violence, such as improvised explosive devices, are seen as a weapon by which actors that lack the ability or will to take over the government can still dictate government policy (Merari, 1993). Previous analysis of particular case studies has found that groups will often defer to these tactics as they become weakened (ACLED, 29 October 2014).

Analysis of the ACLED dataset has found that the rise in militia activity has been spearheaded by the growth in competition militias (Raleigh, 2014). These militias are linked to politically active patrons and use force to advance or obstruct political change. Most importantly, they are active where government power is present but contested. Under such circumstances, the deniability and intimidating nature of remote violence makes it an effective coercive tactic. Remote violence attacks rose in Algeria just prior to the presidential elections on the 17 April (see Figure 1), and in Libya around the time of the February National Assembly elections, although remote violence would rise further late in the year as the country became split between two competing parliaments. In Egypt, remote violence spiked in early 2014 after the designation of the Muslim Brotherhood as a terrorist group (Abdelaziz and Almasy, 25 December 2013). There was also a spike in April before the controversial 2014 presidential elections on 26 May.

In 2014, state forces were involved in 22% of events involving remote violence; in many cases they were the perpetrators. Airstrikes and bombing runs by government forces have been especially common in areas where insurgents control significant portions of territory, such as Somalia and Darfur (see Figure 2). Remote violence offers a means by which the Sudanese and Somalian state can attack the insurgents with minimal risk to their own troops. The presence of defined insurgent territory also means that state forces can launch attacks with a certain degree of impunity, knowing that such attacks will damage insurgent resources. However, government participation in remote violence, especially against civilians and rebel movements, has decreased year on year from 36% in 2008. The one type of remote violence engagement where state participation is increasing is between the state and political militias. Should the trend of increased militia activity continue, it is likely that 2015 will see another increase in remote violence.