Rape as a Weapon of Political Violence, Part 1: Trends Across Africa 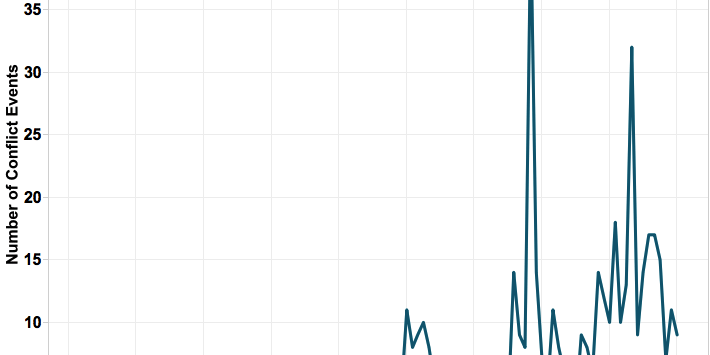 Sexual violence as a weapon of political conflict is a serious, present-day atrocity affecting millions of people (primarily women and girls)[1] with grave health implications, both physical and psychological (Bastick, Grimm, and Kunz, 2007; UN, 2015). It is frequently a conscious strategy employed by armed groups to torture and humiliate opponents; terrify individuals and destroy societies, especially to incite flight from a territory; and to reaffirm aggression and brutality, specifically through an expression of domination (Bastick et al., 2007; UN, 2015).
Unlike other armed conflict datasets, ACLED does not narrow political violence to only events surpassing a certain fatality threshold.  By searching for conflict events within the ACLED dataset related to rape, one can gain an understanding of sexual violence and when and where it is used. “From a gender perspective, quantifying armed conflict on the basis of battle-related deaths is biased towards men’s experiences of armed conflict to the detriment of those of women and girls. Whilst more men tend to get killed on the battlefield, women and children are often disproportionately targeted with other forms of potentially lethal violence during conflict [e.g., sexual violence]…Defining armed conflict by reference to ‘battle-related deaths’ reinforces a gendered hierarchy, whereby the various causes of death and suffering affecting men during conflict are elevated in importance compared to those affecting women and girls” (Bastick et al., 2007).

ACLED data suggest that rates of rape used as a weapon of political violence have been higher than average in recent years, since late 2012 (see Figure 1).[2]  This is largely driven by spikes in the use of rape in political conflict situations in DR-Congo in 2012 and 2014, as well as the growing trend of this violence tactic in Sudan since 2012. These two countries see the majority of instances in which rape is used as a weapon of political violence in Africa (see Figure 2).

Since 2012, political militias have begun increasingly using rape as a political violence tactic (see Figure 3), and can be seen instigating this type of violence more expansively across Africa (see Figure 4). While these conflict events by political militias can be seen largely perpetrated in the Darfur region of the Sudan, in the Kivu region and Orientale province of DR-Congo, and in western Central African Republic, there are numerous instances of rape being used as a weapon of violence by other conflict actors as well across the continent.  Government military forces as well as rebel groups have been primary instigators of this political tactic in recent years as well.

[1] “Although the majority of victims of conflict-related sexual violence are women and girls, men and boys are also targeted in armed conflict, and are particularly vulnerable when in detention or when forcibly recruited by armed groups” (Bastick et al., 2007).
[2] Given the stigma so often associated with being a survivor of rape, instances of rape are categorically underreported, so estimates reported here undoubtedly represent fewer than the true number of instances of rape used as a weapon of political violence.