State Repression as an Obstruction to Conflict Monitoring 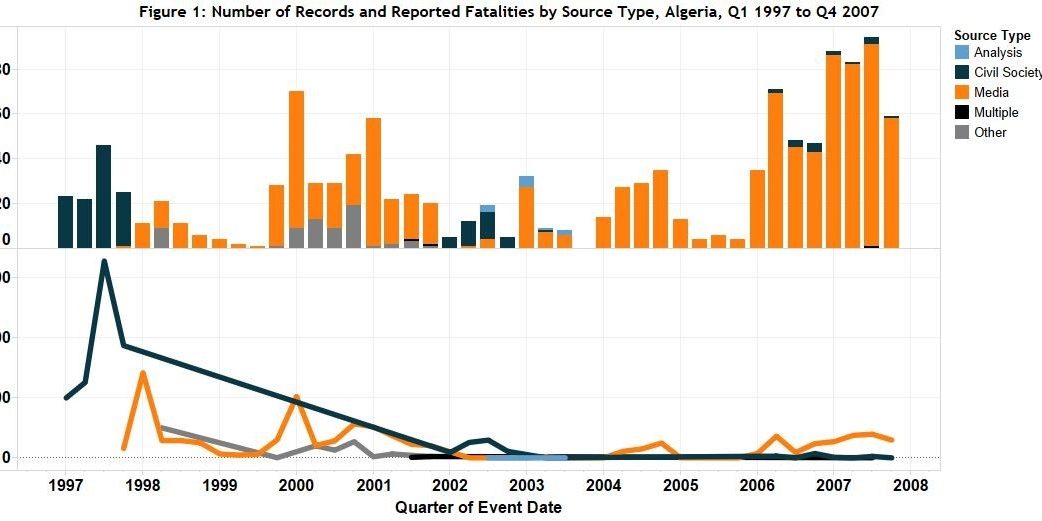 Governments may purposely repress or limit the information available to NGOs, media outlets and academics to prevent state forces or policies from being portrayed in a negative light. Conflict, dissent and civil war increase the incentives for controlling information relating to political violence. Reports of human rights abuses by state forces or sympathetic actions by anti-government actors can sap public support, whereas reports on troop movements and counter-insurgency policies present security risks.
During the Algerian Civil War (1991-2002) the Algerian government established tight control over the reporting of the conflict and heavily repressed the local media in order to ensure all published reports conformed to the official government line on the conflict. The government established control of the paper supply and printing industry in order to gain leverage over the domestic press (Campagna, 1999). This leverage was used to force month-long closures of two leading dailies: El Watan and Le Matin. State control over the infrastructure necessary for the media incentivised editors to censor coverage of human rights abuses by state supported militias and the use of torture by state forces (ibid.).
The international press faced similar issues. International interest in the Algerian Civil War peaked during a series of massacres in the countryside surrounding Algiers. Though Islamist rebels were implicated in the attacks, some observers speculated on potential state involvement. The government refused to allow an international investigation and foreign journalists who travelled to Algeria were subject to harassment by security officials (ibid.). There were also reports of officials providing journalists with false witnesses (ibid.).

Figure 1 shows that ACLED is largely dependent on civil society and NGO reports for coding events taking place in the late 1990s in Algeria. The use of media sources increases from the early 2000s onwards. Campagna (1999) asserts that by 1999 journalists were better able to report with more freedom and criticise government policy, but still continued to be held hostage by the threat of criminal prosecution. Furthermore, in spite of the war officially ending in 2002, Algeria saw more recorded conflict events (albeit with much lower numbers of fatalities) in 2007. The vast majority of these events were coded by the media. This increase implies a higher level of disaggregation which in turn implies that the press has more freedom to report on conflict events.

The example of Algeria raises the issue of whether state repression can seriously impact the quality of the dataset. To examine whether the Algeria case-study is indicative of a larger pattern in which state repression negatively impacts the reporting of conflict events, each country-year dyad in ACLED was merged with a corresponding ‘Freedom of Press’ score supplied by Freedom House (Freedom House, 2014a). Figure 2 shows that there is no clear relationship between the number of records reported (by all sources) for a country and the repression of the press by the state. Figure 3 shows that there is still no clear relationship between the number of reports and press freedom score when the events are limited to those coded using reports from a country’s national media, the primary target for state repression.

The example of Algeria is indicative of the limits faced by datasets which monitor conflict through secondary sources. Powerful actors such as states can censor information or manipulate key facts before a relevant text is published. Similarly, states can employ their considerable resources to deceive and mislead publications that are outside of their sphere of influence, as shown by the Algerian government’s treatment of the international press. However, a wider analysis shows that the ACLED dataset is still resilient against the potential bias introduced by state repression and intrusion of the media.