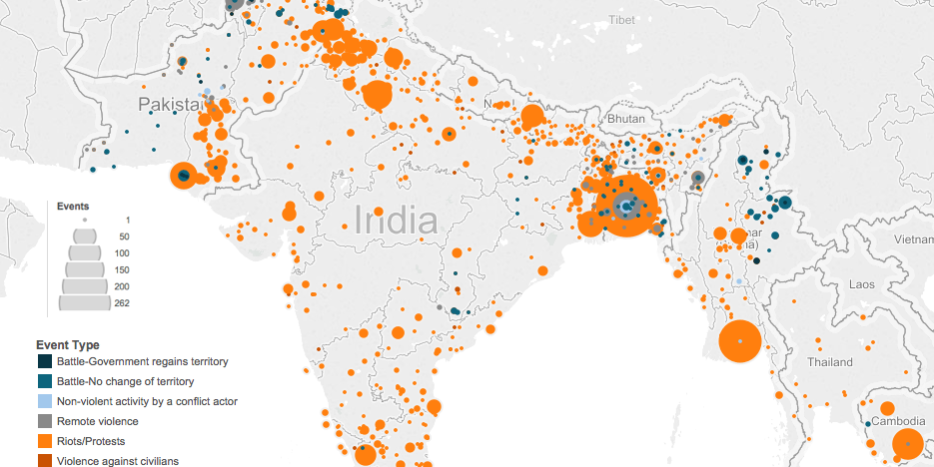 ACLED data differs from available information on South and Southeast Asia in numerous and significant ways: it is records the who, what, when, where and how many conflict events; it is released consistently and collects information in real-time; it collects information on a wide range of political violence, from protests to drone attacks, in order to capture the ways in which communities experience instability and risk; it contains information that is directly comparable across different contexts, countries, over time and between conflicts; it collects information on conflict events committed by a wide range of conflict agents. Groups involved in political violence are recorded by their names, affiliations, and group ‘type’. The ACLED system of group interactions allow users to distinguish events involving rebels, militias, state forces,  communal groups, foreign groups, rioters, protesters and civilians. ACLED also records instances where ‘unidentified’ groups commit political violence. Political agents often do not officially acknowledge their role in violence, especially acts committed against civilians. Further, unidentified groups may remain un-named due to media restrictions. To ignore unidentified violent events is to knowingly under-record and bias the record of the threats to peace and stability occurring across actively conflicted states. Finally, ACLED data are accessible, transparent, and collected from a wide range of sources to create thorough, valid and verifiable information.

The events occurring within South and South East Asia display a different conflict profile from African states. In this region, riots and protests make up over 70% of all reported events; this is over double the rate across African states. In addition, armed organized conflict is less common, and the state is often involved in these episodes.

Figure 2: Types of Activity by State

Real-time data will be released by month, while the ACLED Asia team continues to collect back dated information for all states. Several states will have coverage from 1997-present, while others will have conflict events coded from 2010-present for the initial round of backdating.