The Risk of Conflict-Related Mortality: How to Calculate Risk and Understanding Relative Risk Across Countries 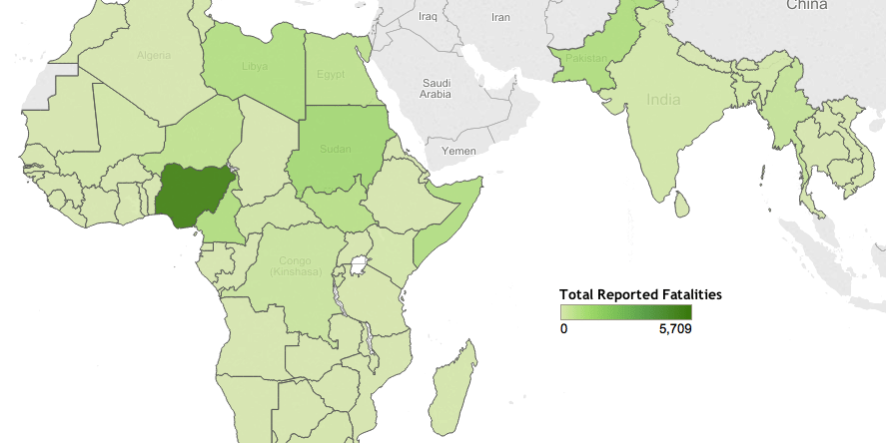 A unit of relative risk is necessary in order to be able to draw comparisons on the risk of violence or death against civilians from political conflict. A micromort is such a measure, and is often used to determine the ‘riskiness’ of various activities within decision analysis (Howard, 1980). A micromort is the microprobability of death, or a calculation of a unit of risk measuring the one-in-a-million probability of death.
Here, we use micromorts to determine the civilian risk from political conflict in various African and South and Southeast Asian countries so far this year. We base these on fatality data, and assess a rough estimate of the average risk of death from political conflict that individuals in various countries experienced each day so far this year. The risk calculated is the relative average risk over a population, not the risk to a specific individual, or even the risk to a random person drawn from the population. Arguably, certain individuals within countries experience a higher or lower risk relative to their peers as a result of region, ethnicity, etc. For example, individuals living in Darfur face a higher risk of lethality from political conflict relative to others within Sudan, as much of the political conflict within Sudan is located in that region. Micromorts can also be determined sub-nationally, but for this exercise we compare countries.
A micromort is calculated by dividing the number of conflict-related fatalities by the number of days, dividing this number by the population of a given unit (country, region, etc.), and then multiplying this value by one million in order to determine the one-in-a-million risk incurred.
Using real-time conflict data from ACLED on political conflict in January, February, and March of 2015 (i.e., the first 90 days of 2015) across Africa and South and Southeast Asia, Figure 1 depicts in what countries fatalities have occurred. The majority of these deaths – or 5,709 conflict-related fatalities – have occurred in Nigeria (largely at the hands of Boko Haram). This is about 5 times as many fatalities as that experienced by the second deadliest country, Sudan (1,275 deaths). 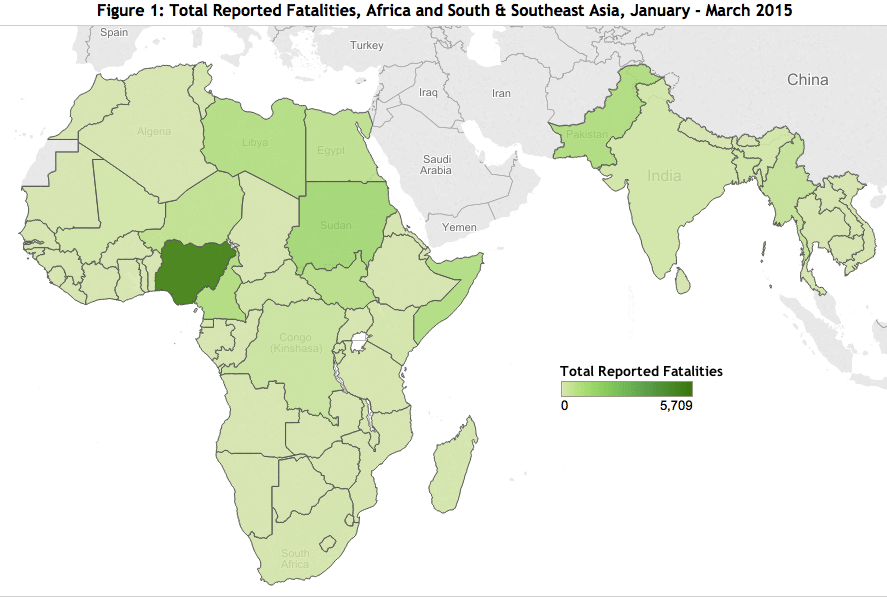 However, the risk of conflict-related death incurred by Nigerians relative to the Sudanese is conditional on the Nigerian population, which is approximately 5 times the population of Sudan. So, statistically-speaking, given that Nigerians experienced 5 times as many fatalities within a population that is 5 times the size of Sudan, the relative-risk of mortality as a result of conflict in Nigeria and Sudan is roughly equivalent: so far this year, the average Nigerian and the average Sudanese person share an equally high risk of death from political conflict. Population data come from Population Pyramid.
Figure 2 maps the relative one-in-a-million risk of conflict-related death of individuals in each country in Africa and South and Southeast Asia in the first three months of 2015. Of the top 10 countries with the highest micromorts, African countries top the list, followed by Myanmar in tenth, with a risk of 0.08. The average individual in countries with high numbers of fatalities – such as Nigeria and Sudan – exhibit a high risk of mortality from political conflict, but the average individual in other countries top the list for incurring the highest micromort. 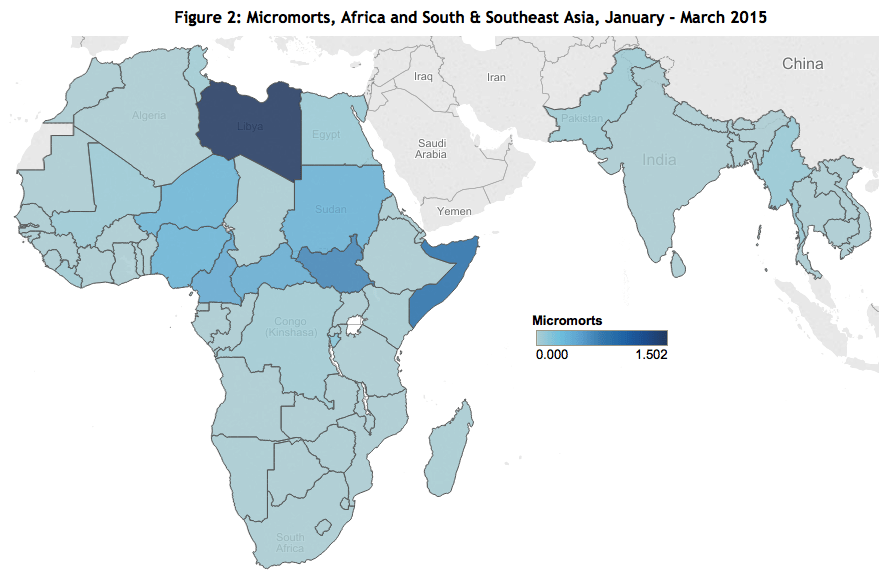 Individuals in Libya incur a micromort of 1.50, which is about twice that of individuals in Somalia (the country with individuals exhibiting the second highest risk with a micromort of 0.87). This suggests that the average Libyan is at the highest risk of mortality from political conflict during January to March relative to individuals across Africa and South and Southeast Asia. Conflict in Libya has largely been driven by competition for national control, fought through a series of local proxy contests. Meanwhile, conflict in Somalia is largely a result of continued fighting between Al Shabaab and government forces – as well as violence carried out by unidentified armed groups, arguably on behalf of these larger groups.
Figure 3 maps the populations of African and South and Southeast Asian countries along with the locations of conflict-related fatalities in each country. Micromorts are highest for countries with relatively lower populations and a higher number of reported fatalities, as this implies that the relative individual-level risk of mortality to each citizen within that country is higher. 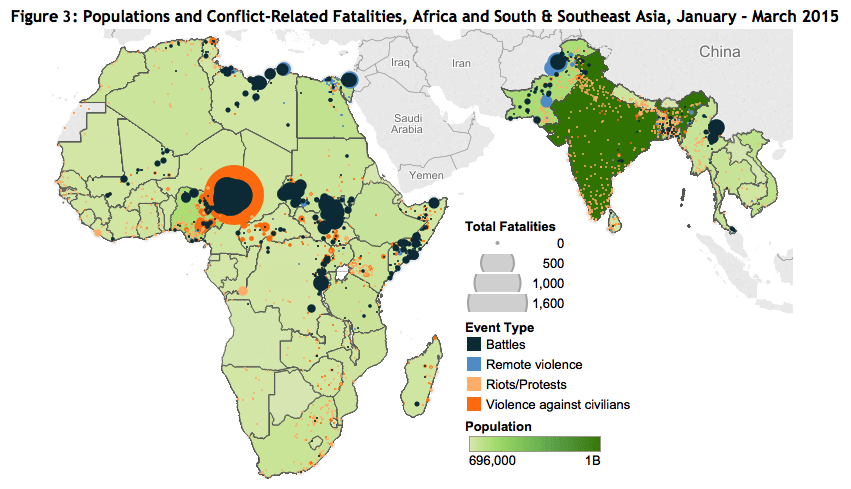 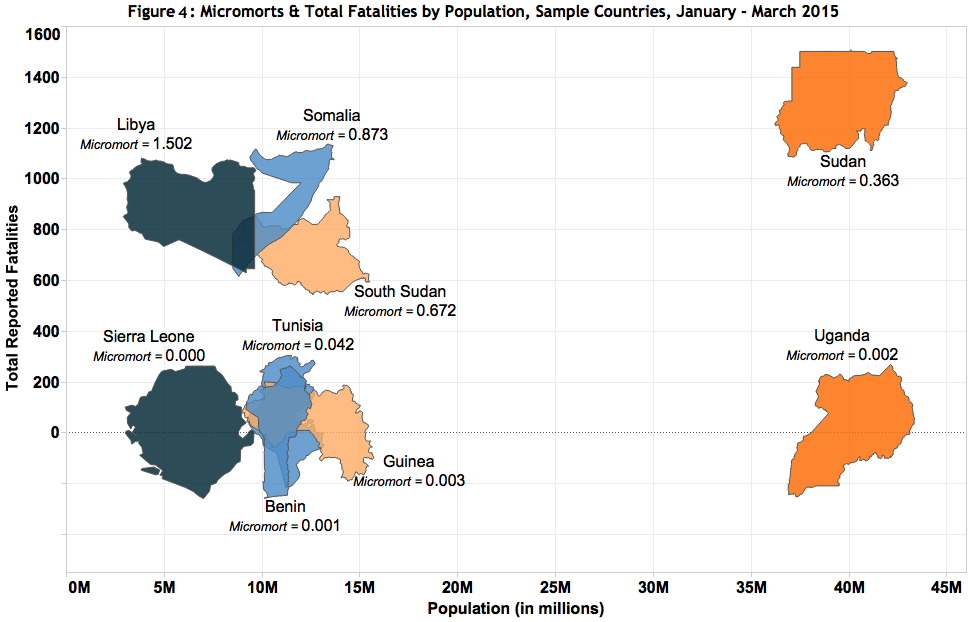 The starkest difference in micromorts between two similarly sized states is Libya and Sierra Leone (dark blue in Figure 4). The average Libyan faced a micromort of 1.502 in the first three months of 2015; this was the highest micromort reported thus far this year across both Africa and South and Southeast Asia. Meanwhile, a Sierra Leonean has a micromort of 0 (one of the lowest micromorts across the two continents) as no conflict-related fatalities have been reported thus far this year in the country.
Somalia, Tunisia, and Benin (countries in light blue in Figure 4) all have similar population sizes, though the relative risk of death to individuals in each state varies greatly across the countries.  Micromorts for the three countries are 0.873, 0.042, and 0.001, respectively. Somalians face a risk that is 20 times higher than that of a Tunisian, and 873 times the risk relative to those in Benin.
South Sudan and Guinea (countries in light orange in Figure 4) have similar populations, though the relative risk of death to individuals in South Sudan has been 224 times higher than the risk to Guineans so far this year, making South Sudan the country with the third highest micromort (behind Libya and Somalia) in 2015 across both Africa as well as South and Southeast Asia.
Lastly, despite differences in landmass, Sudan and Uganda (countries in orange in Figure 4) have roughly similar populations (39,613,000 and 40,141,000, respectively). The relative risk of mortality faced by individuals in Sudan so far this year, however, has been over 181 times higher than that faced by Ugandans (micromorts of 0.363 and 0.002, respectively). This is due to the fact that there have been 1,295 reported conflict-related fatalities in Sudan between January 1 and March 31 of this year, while only 6 conflict-related deaths have been reported in Uganda during the same period.
Micromorts are a useful tool in comparing relative risk across countries, specifically when trying to understand the risk of mortality individuals in different countries incur from political conflicts.