Reporting Lags and the Timeliness of Realtime Data 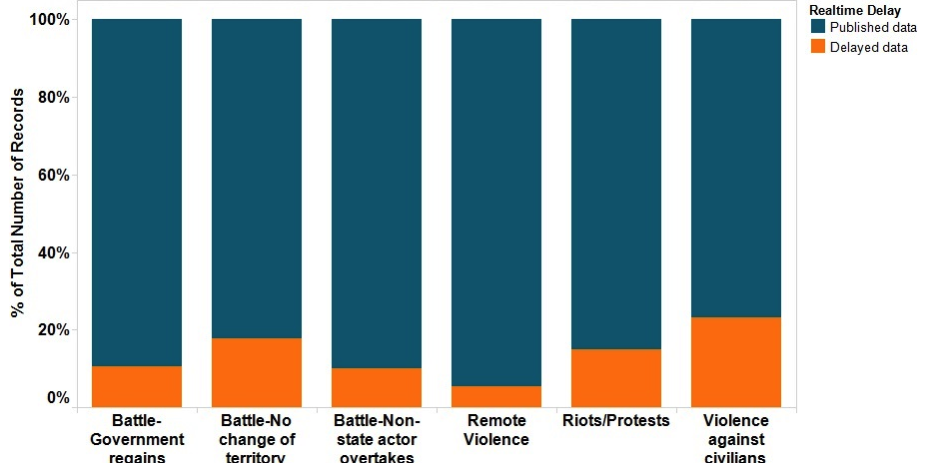 ACLED collects disaggregated data of every event of political violence in Africa, henceforth expanding to Asia (Raleigh et al., 2010). A particularity of ACLED’s work is the publication of data on a real-time, weekly basis. One issue experienced in the collection of real-time data is that of reporting lags, by which information about a particular event is only available several days, weeks, or even months after it originally occurred. This report explores some of the determinants of reporting lags, and their relationship to the types of violence and actors involved.
For the purposes of this analysis, lagged reporting of an event refers to events which are not reported in the corresponding weekly coding period: this may mean there is a delay of several days, weeks or even months. What factors are associated with delays in reporting? To explore this, all events from ACLED’s realtime published data between May 2014 to April 2015 is compared to the lagged events (those published outside the coding week in question) from that period, allowing us to compare published with delayed data.
Event types:
The type of event may affect the timeliness of its reporting in several ways, with some events more likely to be reported immediately than others. Whether or not observers can quickly access the location of an event might affect real-time reporting (Weidmann, 2014). Violence which occurs in a conventional battlefield may create particular challenges for observers to access sites of conflict: as experienced by some journalists during the Gulf War, military forces can control access to fighting areas, and may also control journalists’ material, and delay their release (Halliday, 1999). Despite the ‘news value’ of battle sites, and interest in fighting areas by observers (journalists, aid workers), information might be difficult to gather. By contrast, incidents of remote violence – such as bombings, IEDs or landmines – may allow observers to be near to the event location within a few minutes of it occurring. Incidents of remote violence may be devastating, the fact that they are typically perpetrated by combatants who are not at the site itself, may mean there is greater access to the conflict site than in incidents of direct clashes, such as battles.
Over the analysis period, approximately 17.4% of all published data is delayed. However the likelihood of reporting lags does varies by type of event. According to Figure 1, while battles and riots/protests events appear to be largely comparable in their degree of reporting delay, remote violence events show a very low level of delay (5.5%), particularly compared to the relatively high probability of delayed reporting of violence against civilians (23.3%). 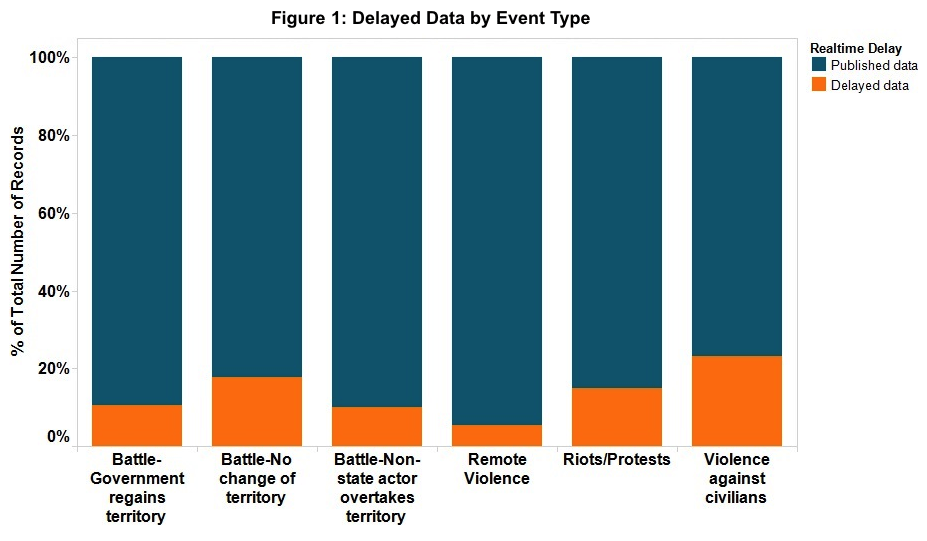 Incidents of violence against civilians may be more likely to be reported by civil society groups, such as NGOs and human rights organisations, whose investigations are based mostly on post-hoc interviews, which may constrain real-time reporting (Wigmore-Shepherd, 2015).
In spite of this general trend, some countries show marked variation in the degree of reporting timeliness by event type (see Figure 2). For example, in Cameroon, a quarter of events involving remote violence are delayed, compared to 12.1% for battles and 22.7% for riots/protests. One argument to explain these lags is the extreme remoteness of these incidences, or rural over urban occurrences. Sudan experiences a similar pattern: 16.9% events involving remote weapons are delayed, but only 12.8% of riots/protests events are lagged (see Figure 2). However, insights from high violence states including Libya, Somalia and Egypt contradict this assumption, as in those countries there is no clear gap between the timeliness of reporting of rural and urban events. 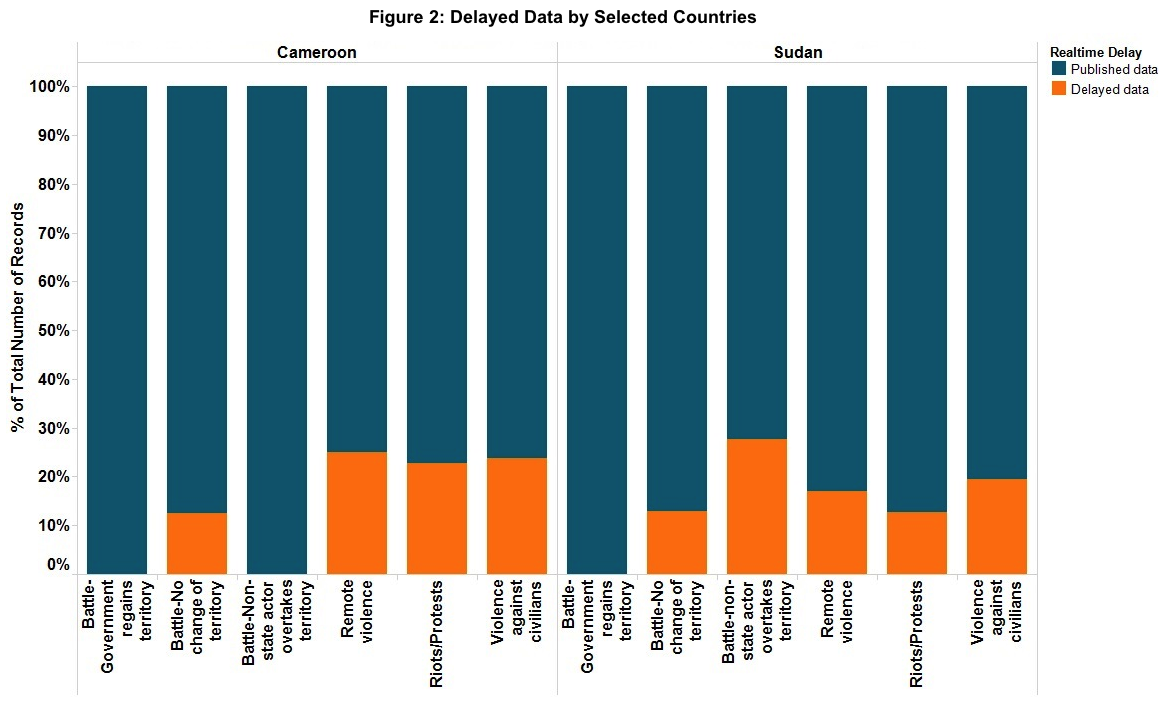 Actor types:
Disaggregating event types by actor also reveals interesting patterns: some conflict actors might have greater ‘news value’ for reporting than others, with implications for the timeliness of reporting. According to Drakos and Gofas, terrorist attacks are typically carried out in accordance with two objectives, to: “(1) maximize the probability of the attack being reported and (2) select the location that will provide the highest coverage” (2006: 716). Media may have a particular interest in the news value of terrorist attacks, while they may be designed or carried out with the purpose of exploiting media coverage as a communication tool in mind (Frey and Rohner, 2006). To avoid issues related to the definition of terrorism (see ACLED, 2014), this analysis uses those groups designated Foreign Terrorist Organizations (FTO) by US Department of State. Seven FTOs were active within several African countries between May 2014 and April 2015 (Ajnad Misr, Al Shabaab, Ansar al-Sharia, Ansar Beit-al-Maqdis, Ansar Dine, Al Qaeda in the Islamic Maghreb and Boko Haram).
Overall, there is small gap between the timeliness of reporting events involving FTOs and non-FTOs: 15.9% of events involving FTOs are subject to a reporting delay, in comparison with 17.9% for non-FTOs. Although this pattern supports the assumption that reporting of incidents involving terrorism will be less delayed than reporting of other groups’ actions, the gap remains weaker than expected. However, when we disaggregate this data by country, limiting our analysis to those countries in which FTOs are active, we see that this convergence is driven by dynamics in a small number of countries, namely Libya, Somalia and to a lesser extent, Tanzania and Niger. In each of these cases, the reporting of FTO and non-FTO violence is broadly comparable: in Libya, 9.6% of events involving violence by both FTOs and non-FTOs is equally subject to a delay; while in Somalia, 19.6% of non-FTO violence is subject to delay, compared to 18.8% of FTO. In Tanzania and Niger, while absolute levels of FTO violence (associated with Al Shabaab operatives in the country) are low, the rate of delayed reporting is in fact higher for these incidents (28.6% and 4.4% respectively) than non-FTO counterparts (26.7% and 4.1% respectively).
Overall, however, there is weak but consistent evidence that the reporting of violence involving FTOs is subject to less of a delay than non-FTOs: in countries like Algeria, Cameroon and Egypt, the gap is particularly marked (see Figure 3). In the case of Nigeria, while the gap between reporting delays is relatively smaller (16.4% for non-FTOs compared to 14% for FTOs), these patterns emerge in spite of several studies suggesting that media reporting of Boko Haram activity is subject to severe delays, media bias, and lack of timeliness (Akpan et al., 2013; Okoro and Chukwuma, 2012). However, in an analysis of the top ten most active non-state violent groups (excluding protesters and rioters) in Nigeria, approximately 20% of violence is delayed on average. By contrast, only 13.7% of Boko Haram events are subject to a delay, considerably less than the rate of delay for generic vigilante militias (22.6%) and the specific anti-Boko Haram militia, the Borno Vigilance Youths Group (21.4%). This divergence from patterns in Somalia might be explained by the fact that Boko Haram violence received considerable media attention within the period under review (e.g. the social media campaign, #BringBackOurGirls Twitter took place in April/May 2014). 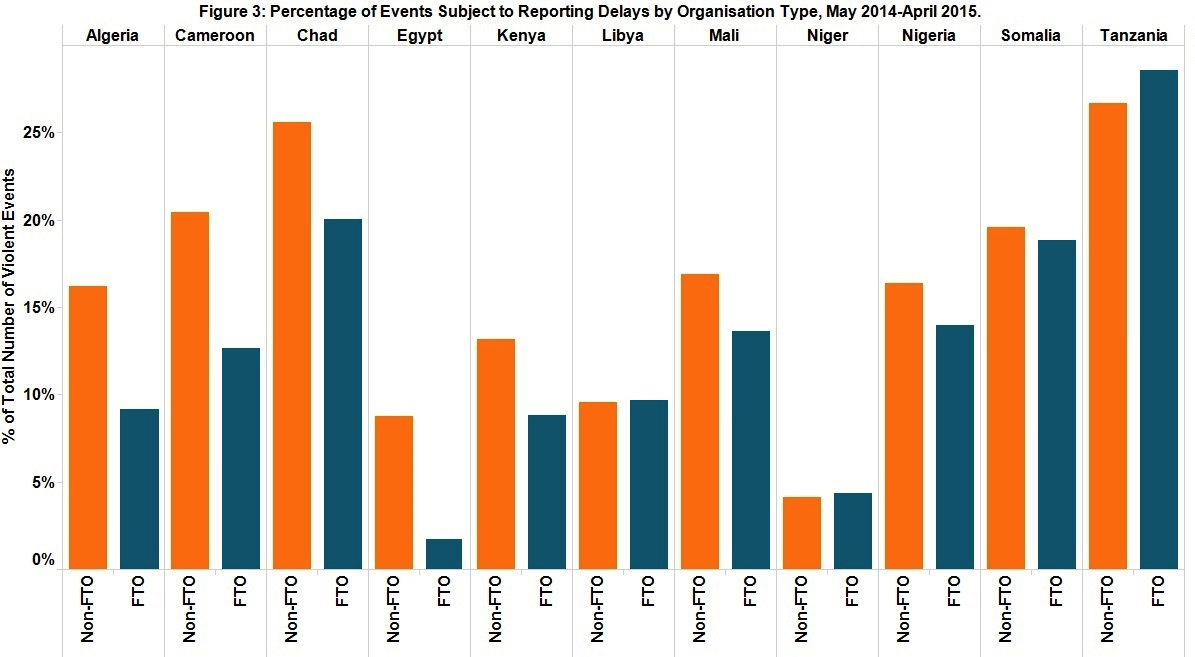 In conclusion, this preliminary analysis suggests that the type of event is likely to influence the degree of reporting timeliness: remote violence, which may affect timely access to sites of conflict, is typically subject to less delay than other forms of violence, with violence against civilians exhibiting a clear tendency for delayed reporting. In addition, the types of actors involved in conflict influence the timeliness of reporting: FTOs typically see a lower rate of reporting delay than non-FTO counterparts. Further research is required to investigate the degree to which the location of an event within a particular country, or within a particular sub-national region in a country, affects timeliness.