‘Good Governance’ and Conflict in Africa 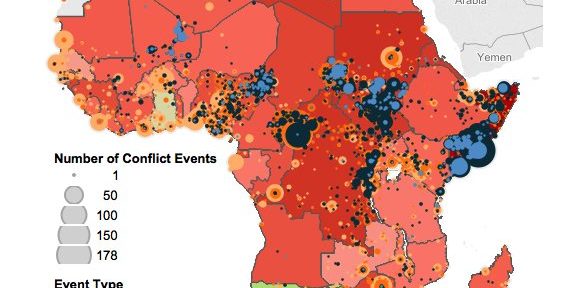 The World Governance Indicators (WGI), produced by Kaufmann, Kraay, and Mastruzzi (2014), measure governance defined as “the set of traditions and institutions by which authority in a country is exercised; this includes (1) the process by which governments are selected, monitored and replaced, (2) the capacity of the government to effectively formulate and implement sound policies, and (3) the respect of citizens and the state for the institutions that govern economic and social interactions among them.”

Drawing on information from a large number of different data sources, six broad dimensions are measured and capture specific facets of governance including: voice and accountability; political stability and the absence of violence/terrorism; government effectiveness; regulatory quality; rule of law; and control of corruption. In the empirical literature, these six indicators are often used to create a composite (equally-weighted) index (for example, see: Neumayer, 2002; Beck & Laeven, 2006; Easterly, 2007). 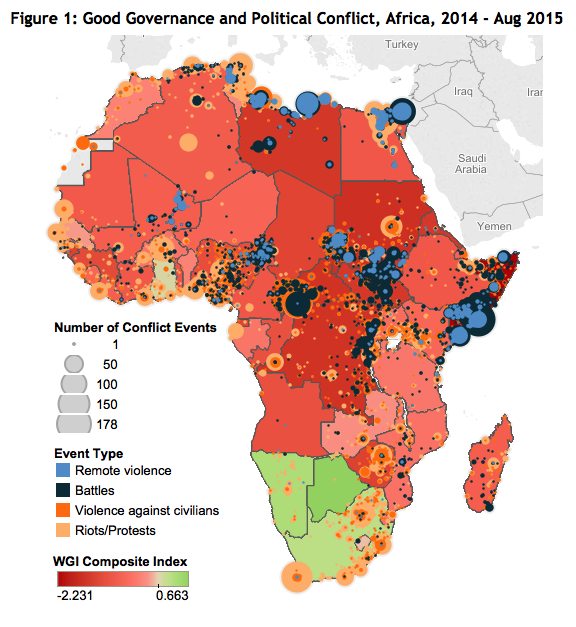 As expected, states with the lowest indicator scores – such as Somalia and Central African Republic – do indeed exhibit extremely high levels of violence, while states such as Botswana – exhibiting the highest indicator score on the continent – see extremely low relative levels of conflict. However, South Africa – with the third highest governance score on the continent – is responsible for almost one-fifth of all riots and protests occurring on the continent during the time period, as well as approximately 5% of all violence against civilians, suggesting it is a hotbed of contention. These findings may be obscured if solely relying on the composite index without considering how forms of political violence can be endogenous to the type, strength and stability of established political institutions (see Choi & Raleigh, 2014). Further, the need for a differently-weighted, annually-calculated index may facilitate better analysis of how violence and governance correspond (see Pinar, 2014).

Numerous studies argue for a link between good governance practices and successful development strategies, contending that institutional quality is the most important determinant of income differences and growth patterns amongst countries (for example, see: North, 1990; Acemoglu, Johnson, & Robinson, 2001; Easterly & Levine, 2003). And others present findings suggesting that ‘good governance’ practices best explain various types of conflict, especially deprivation-based conflict which can be fueled by social inequalities (Hegre & Nygård, 2014). While institutional quality may be an important mechanism in shaping conflict and development, it is important to be cognizant of not imposing a “one-best-way model”. Andrews (2008) finds that this has often been the case with the ‘good governance agenda’, arguing that this model “lacks consistency, …seems inappropriate for use in the development dialogue and is not easily replicated…[resembling] a set of well meaning but problematic proverbs” (p.379).