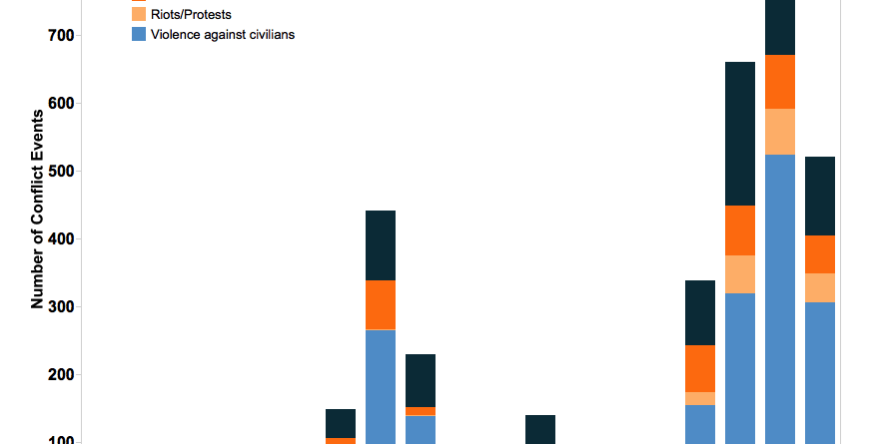 ACLED periodically reviews its coding of past major events and each country. These data occasionally correct some aspect of the previously coded events, or constitute newly coded events. We recently considered Sudan, and have added a number of events to the account of the early Darfur crisis (see Figure 1). The final account of the Darfur crisis in 2004-2005 will appear in Version 6 of the ACLED data project for Africa, available in January 2016. 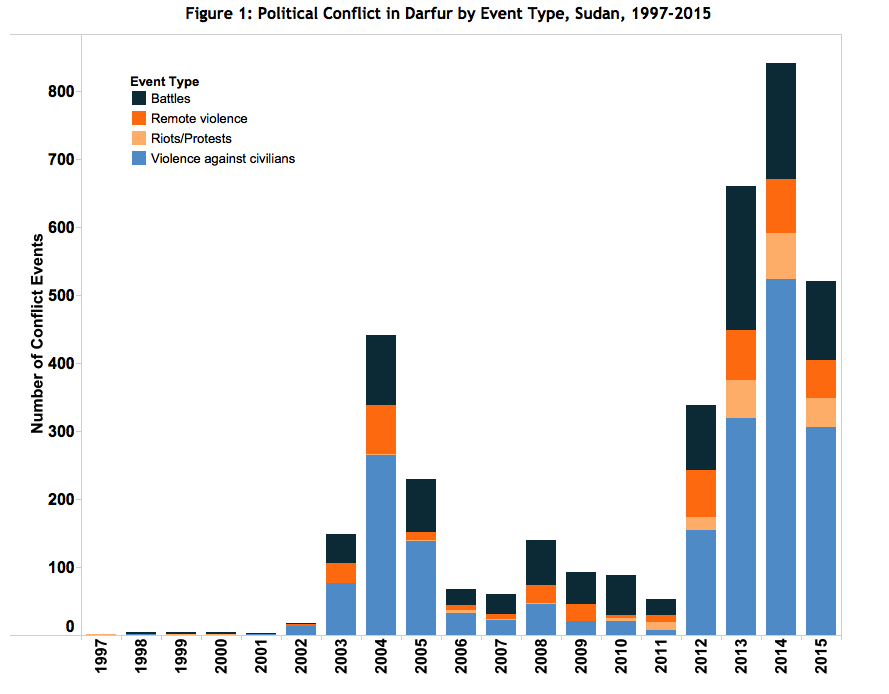 As of August 2015, violence against civilians has reached the heights of 2004, when a devastating war gripped the Darfur and spread into Chad. The rate of civilian attacks throughout Sudan rises and falls in association with crises in Darfur; Figure 2 notes the proportion of each event type over time. Violence against civilians was over 50% of all reported events in 2004/5 and 2014 (2015 is presently at 49%). 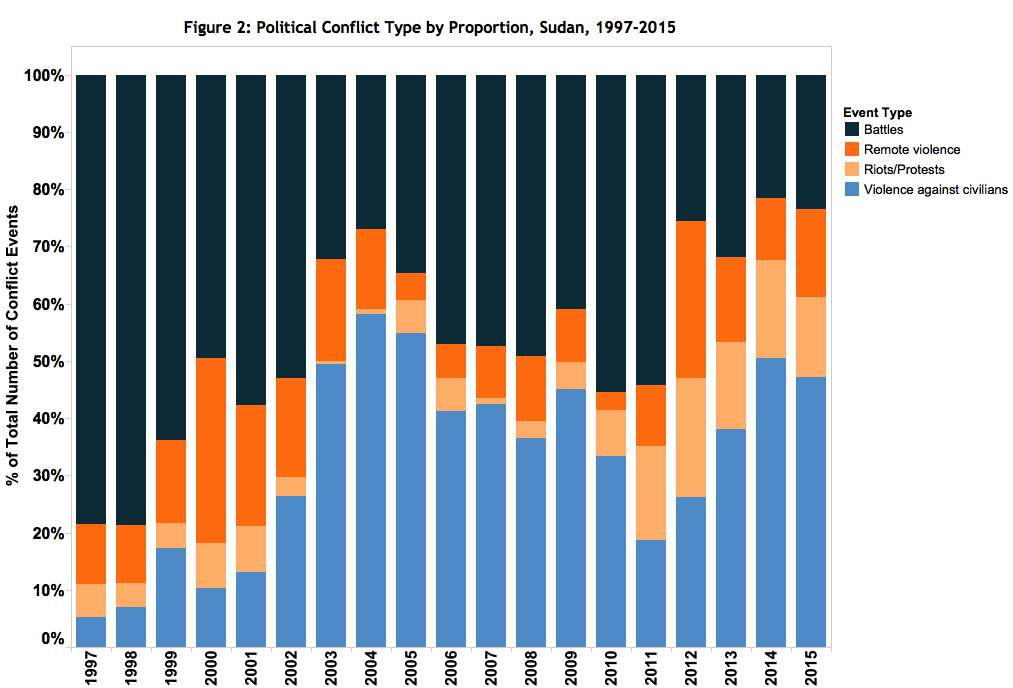 Here we have included all recorded events from January 1st 1997 to August 15th 2015 in both monadic and dyadic files. A dyadic file records the event between typically two agents (e.g. The military of Sudan vs. SLM/A-Nur; the Janjaweed attacking civilians, etc.). The monadic file is a list of all events by single actor (e.g. all events involving the People’s Defense Forces or Civilians). The monadic file is made from the dyadic file. More information about how to use these files is available here.
Darfur continues to be one of the most active conflict environments across Africa. Since the 2004/5 war, Darfur has entered into another crisis, characterized mainly by attacks on civilians over all other event types (e.g. battles, bombings etc.) since 2012. 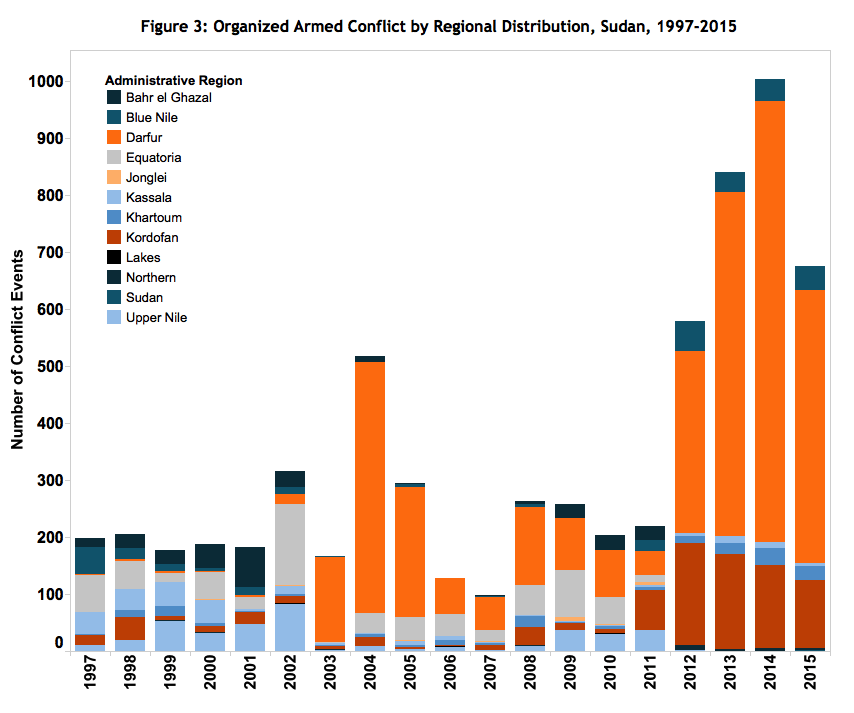 In both 2014 and 2015, Darfur has experienced more than four times more political violence than any other region of Sudan, both in absolute numbers and by proportion.
High rates of civilian targeting in the region by the Government of Sudan, the SLM/A-Nur, unidentified armed groups, and the Rizaygat militias have created a humanitarian crisis in recent years. However, fatality rates for 2004/5 are still markedly higher than the recent troubles (see Figure 4). 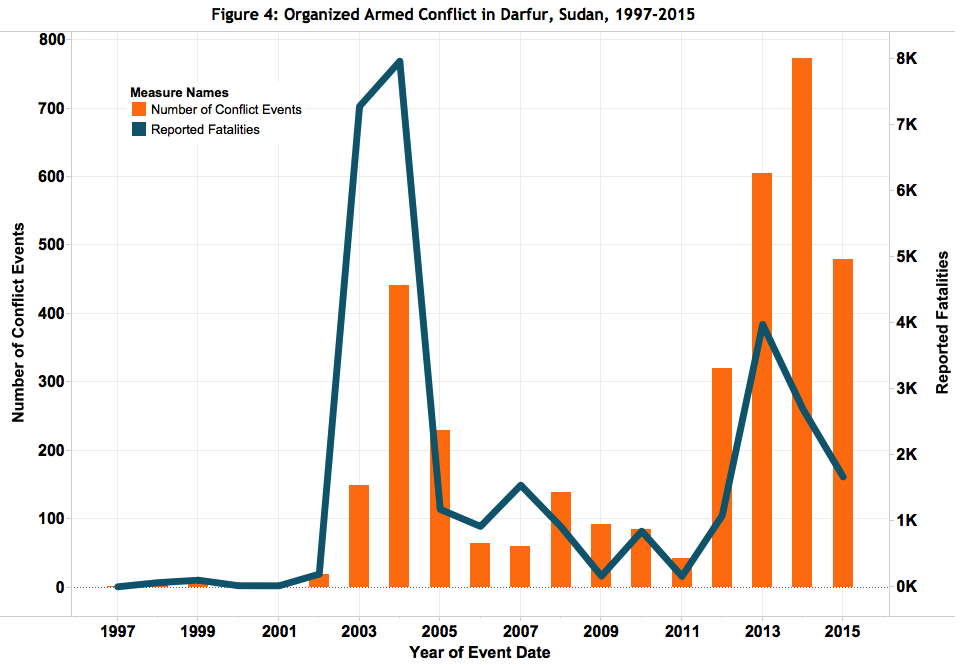 Over the time period observed here (1997-2015), over 26 distinct rebel groups have been active, 12 militias (some pro-government), 49 local ethno-regional militias, and 10 distinct external parties (e.g. foreign rebel groups, foreign state troops, etc.). Since 2012, the number of armed opposition and violent groups has been especially volatile; this indicates that the Darfur crisis has emerged from a fragmented growth period in 2014 to a more concentrated competition in 2015.