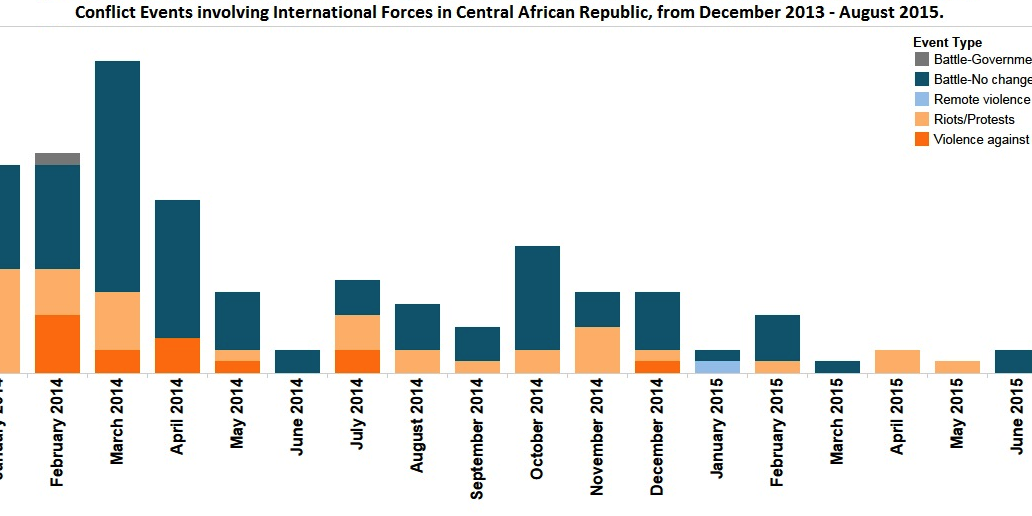 In April, allegations of child sexual abuse by French soldiers and other nationalities deployed as part of international peacekeeping efforts in Central African Republic surfaced. Since then, troubles have continued to mount for these forces. Despite the largely successful draw-down in violence across much of the country, claims of abuses by peacekeepers, now primarily regarding the United Nations Multidimensional Integrated Stabilization Mission in the Central African Republic (known by its French acronym MINUSCA), continue to mount against international forces stationed in the country as they continue to engage in sporadic policing operations (see Figure 1).

Assessing the effectiveness of the peacekeeping operations, violence involving peacekeeping forces (including French soldiers) has fallen consistently since their deployment. Conflict levels dropped from a high of 28 in December 2013 when they first arrived to a low of only a couple of recorded events per month between March to June 2015. Whilst MISCA and Sangaris forces primarily engaged in battles and a number of riots and protests – often reacting to Anti-Balaka activity – erupted between February and July of 2014, a significant number of events were reported that involved indiscriminate firing on civilians by peacekeeping forces. In February 2014, over 26% of peacekeeping activity involved violence against civilians. Figure 1 illustrates that this trend may be set to rise again, where July and August 2015 witnessed an upswing in violence against civilians. Despite the effectiveness of the peacekeeping mission, these instances of violence and abuse of civilians have become a major issue.
The disclosure of an internal UN report to French prosecutors by a senior UN aid worker revealed that sexual exploitation of children as young as nine by French soldiers had been documented going back to 2013. The report, purportedly released due to unwillingness within the UN to follow up on its findings, alleged that between December 2013 and June 2014 around 10 children had been abused at the M’Poko airport area, where refugees were under the protection of international forces (Reuters, April 29, 2015). Following the release of this report, 14 French soldiers have come under investigation, although few have been identified (The Guardian, May 7, 2015). MISCA and MINUSCA soldiers were also implicated in the abuse (OHCHR, May 30, 2015).
In addition to these specific allegations, MINUSCA peacekeepers have come under increasing fire for their alleged abuses against civilian populations. Before the transformation of MISCA into MINUSCA, their soldiers had engaged in at least a dozen instances of violence against civilians in 2014, primarily involving indiscriminate attacks on civilians alongside instances of excessive force used against protesters. Many of the civilian deaths caused by these incidents were attributed to Chadian soldiers in the MISCA contingent. Since MISCA transformed into MINUSCA, the proportion of these incidents has fallen, although recent allegations have been made that MINUSCA soldiers sexually abused at least one child and three other women and allegedly caused the deaths of two civilians after a Cameroonian peacekeeper was killed in the area (Business Insider, August 19, 2015). Although these may be isolated incidents, a rise in violence seen over the past two months could signal trouble ahead.