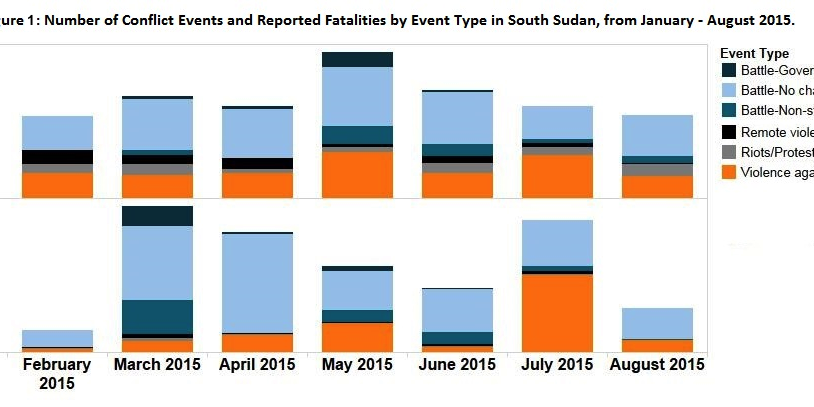 Levels of political violence in South Sudan decreased in August with reported fatalities falling by over 60% (see Figure 1). This relative lull in violence follows a particularly unstable July in which government forces —supported by Bul Nuer and Warrap Dinka fighters — killed 200 civilians in Mayendit and Leer (Sudan Tribune, 12 August 2015). This assault on the home area of rebel commander Riek Machar occurred within the context of repeated territorial losses by the government. There have been no reports of the government recovering territory since June. In contrast, the rebel Sudan People’s Liberation Army — In Opposition (SPLA-IO) has made territorial gains every month since May. Governments often use violence against civilians as a means to signal to rebel groups that if they continue their campaign, the cost to their constituency will be high (Stanton, 2009). In the face of repeated battlefield defeats, such tactics may be attractive to the South Sudanese administration.

The decrease in violence in August is likely due to the latest round of peace talks between the government and SPLA-IO. Conflict actors use the lull in fighting during peace negotiations to court both domestic and international support and consolidate their war gains (Stevenson, 17 February 2014). However, these negotiations are unlikely to lead to an enduring peace. There have so far been over seven attempts at forming a political consensus between the warring parties and so far all have failed. This repeated failure is partly due to partisanship within the Intergovernmental Authority on Development (IGAD), which is overseeing the peace process.
Uganda, a key IGAD member, remains both unwaveringly supportive of the Kiir regime and unwilling to remove its troops from South Sudan, a key demand by the opposition in previous negotiations (Bereketeab, 2015). Uganda also considers the SPLA-IO a proxy of Khartoum and worries that a South Sudan in which Machar has political power would be less amenable to Uganda’s interests.
Uganda’s influence in the latest round of talks has made the peace deal markedly less attractive to the opposition. The original draft gave considerable power to the opposition, but after IGAD met in Kampala on 10 August, the opposition’s share of government in Upper Nile, Unity and Jonglei states was cut from 53% to 40% (Africa Confidential, 27 August 2015). Furthermore, while the early draft called for ‘complete withdrawal of all foreign forces/militia allied to either party’ within 45 days, the redrafted deal redefines the parties to withdraw as ‘state security actors’ (Africa Confidential, 27 August 2015). This change in language may allow Uganda to keep its troops within South Sudan without violating the agreement.
Uganda and Sudan are not the only partisan actors in IGAD stymying the peace process, both Kenya and Ethiopia have considerable economic and political interests in South Sudan (Bereketeab, 2015). It is unlikely that a durable peace deal will be negotiated while the actors overseeing the peace process remain so divided.