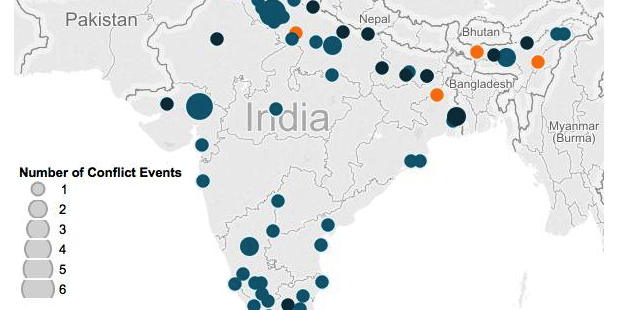 Reigniting the long-standing issue of land acquisition, the proposed amendments to the new 2013 Land Acquisition Act by the Modi-led BJP government in December 2014, have led to nationwide farmer’s protests in India (The Economic Times 2013, BBC 2015). Thousands of farmers took to the streets between January and May 2015, in particular in Bihar and Uttar Pradesh, and increasingly in New Delhi. The protesters were led by members of opposition parties, such as the Indian National Congress (INC) and the Aam Aadmi Party (AAP). In August 2015, in light of protests and ahead of the Bihar state elections, the Prime Minister Modi retracted the proposed amendments (Live Mint 2015, WSJ 2015). Yet, land acquisition is the basis for only one of many land-related conflicts in India. Other national conflicts include land rivalry between ‘indigenous’ and ‘migrant’ communities, inter-communal disputes over religious sites, as well as private land-grabbing, which at times plays out under the veil of communal violence. This piece provides an overview of these land related conflicts in India and how they manifest themselves in various forms of political violence, including ethnic violence, violence between religious groups, as well as caste and economic-based violence.
Ethnic based land conflict between ‘indigenous’ and ‘migrant’ populations, for example, plays out in Assam – a state in Northeast India. Bengali-speaking Muslims and other ‘non-indigenous’ populations have been violently attacked by members of ‘indigenous’ populations, in recent years especially by members of the Bodo community (NDTV 2012, Times of India 2012). Centred on competition for local resources and political power, it has been claimed that the increasing number of Muslims is due to illegal immigration from Bangladesh (BBC 2012). The rivalry between members of the indigenous population and the allegedly illegal Muslim immigrants plays out in frequent occurrences of political violence. It has also led to large-scale violence between Bodos and Bengali-speaking Muslims in 2012 and 2014. The violence between Bodos and Muslims from July to September 2012 in Kokrajhar cost more than 75 lives and hundreds of thousands of Muslims fled their homes (The Economist 2012). In 2014, Bodo groups launched two attacks: first, against Muslims in May and second, against non-Bodo (Adivasi) tribals in December. During the first attack, at least 45 people were killed, during the second attack at least 34 persons (Reuters 2014, The Guardian 2014). In all three incidents, allegedly factions of the National Democratic Front of Bodoland (NDFB) – a separatist group that became active in 1986 – were involved (SATP 2015). Due to the targeting of Muslims, attempts have been made to portray the Bodo conflict as communal, as the conflict is partially based on religious identity. Such claims, however, are difficult to measure due to the religious diversity of the Bodo community and the variation of targets. Partially as a result of the Bodo violence, Assam now has amongst the highest number of internally displaced persons in India (IMDC 2015).

Following the violence in July and December 2014 against Bengali-speaking Muslims and non-Bodo tribals in Assam, the situation has remained much calmer in 2015. No large-scale violence has been reported thus far. Of the total recorded cases, about 80% constituted riots or protests. The remaining recorded cases were comprised of battles and violence against civilians. 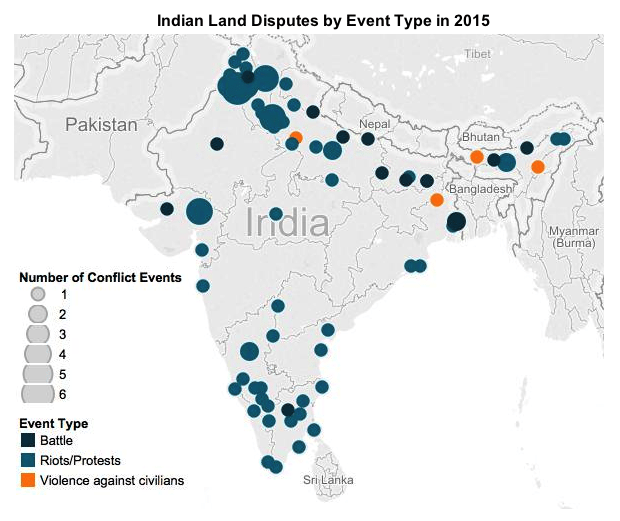 Violence between religious groups across India has at times also evolved around land disputes. Disputes over religious sites or over private land have provided ‘sparks’ for incidents of violence, for example between Hindus and Muslims. In Meerut, Uttar Pradesh, in May 1987, Hindus and Muslims clashed after the murder of a Hindu during a ‘banal land dispute’ (Graff and Galonnier 2013). Yet, more frequent triggers are disputes over religious sites. In the case of the Babri Masjid in Ayodhya in Uttar Pradesh, for example, Hindutva groups claimed – and still claim – that the site of the ancient mosque was in fact the birthplace of Lord Ram, an important deity in Hinduism. This claim led to the mobilisation of thousands of Hindus with the aim to destroy the mosque and to erect a Hindu temple instead. This was organised by Hindu-nationalist organisations such as the Rashtriya Swayamsevak Sangh (RSS), a partner of the currently ruling BJP. The first aim succeeded in December 1992. The nationwide mobilisation for, as well as the actual destruction of the mosque were accompanied and followed by large-scale violence between Hindus and Muslims across the country. In Mumbai alone, at least 900 persons were killed during violence in December 1992 and January 1993 (Rediff 2014). While the case of Ayodhya is probably the best-known example, disputes over religious sites can also trigger more localised incidents of communal violence. Such was the case in the recent violence in May this year in Ballabhgarh, Haryana, where 400 Muslim villagers were attacked over the dispute of a local mosque (The Hindu 2015). While these disputes over land can trigger communal violence, it is important to keep in mind that they represent only one of a number of potential triggers.
Land related caste violence plays out in various forms. Though legally abolished, caste discrimination still persists in India, particularly in rural areas (National Geographic 2003). Members of the Dalit community, formerly referred to as untouchables, are often denied access to certain facilities or areas in villages, such as temples or wells. Breaking those unwritten rules can lead to retaliatory attacks from members of upper castes. In a crude instance of such violence in 2014, a Hindu priest beat to death an 8-year old Dalit, because he had entered a temple (The Telegraph 2014). Traditionally not allowed to own land, Dalits are also regularly subject to forceful evictions from lands they allegedly unrightfully inhabit in villages, but also within cities. These evictions are often accompanied by protests and violent clashes. For example in Kolkata, in West Bengal in 2003, 7,000 Dalits were forcibly evicted from their slum residences at Belilious Park to make way for development projects (HRW 2007). Caste related violence can also be triggered by private disputes over land, similar to the cases discussed in the context of religious groups. Just recently in Rajasthan, as a result of an old land dispute, members of the upper caste Jat community attacked Dalits for allegedly squatting on their lands, killing at least three (BBC 2015).
Taking an economic angle, some scholars have also argued that individual cases of communal violence have served as a form of private ‘land grabbing’. For example, Das (2000) argued that the Kolkata Hindu-Muslim riots in 1992, which erupted following the destruction of the Babri Masjid in Ayodhya, resembled a form of ‘land grabbing in disguise’.  Pointing to rising estate values of slum areas in Kolkata, he suggests that the attacks in these areas were primarily driven by the aim of land developers to forcefully ‘evict’ residents from their land. A similar argument has been made in the context of the 2002 Hindu-Muslim violence in Ahmedabad, Gujarat. Field et Al (2008) found that violence was much more likely in mill areas, where competition for increasingly valuable lands had risen. They suggest that the communal tensions in 2002 were used to evict religious minorities, i.e. Muslims, from their lands.
Land based conflicts are, in reality, often not as neatly separable along markers of identity, such as ethnicity, religion, caste, or class. At times, different markers of identity may overlap. Moreover, markers of identity may change over time. Further, how land, resources and identity may create conditions for violence are often presented in terms of the traditional ‘Hindu-Muslim’ conflict cleavage. Yet, there are myriad ways that intra-group and other challenges can emerge over land, land access, and livelihoods. ACLED will explore these in greater details in the coming months.