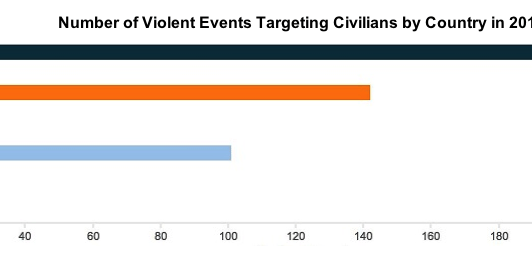 South and Southeast Asian countries have witnessed 561 violent events targeting civilians in 2015 so far. Over half of these events, 293, cannot be verifiably linked to any specific group. Yet the remaining 268 events can be traced to specific rebel groups and political militias. In Bangladesh, the political rivalry between the Bangladesh National Party and Awami League created an environment in which both parties, along with unidentified armed groups, targeted civilians in 212 recorded incidents. India and Pakistan had similar levels of violence against civilians, with 142 and 101 events respectively. Yet a lot of this violence against civilians is a bit more difficult to explain than countries like Bangladesh and Thailand because unidentified armed groups committed a majority of these events. While Thailand did not see as many events targeting civilians as Bangladesh, India, Pakistan, or Myanmar, it did see a continued trend of southern Muslim insurgents targeting civilians in the southern provinces.

Bangladesh
Violent events targeting civilians in Bangladesh is a problem that was examined in the previous trend report. Much of the violence is due to the ongoing political rivalry between the Bangladesh National Party (BNP)  and the Awami League (AL). However, levels of violence have dropped off. At its peak in February, ACLED tracked 76 violent events targeting civilians. Only 34 events occurred in June, July, and August combined. Both the BNP and AL target civilians in order to contest the party in power (currently the AL), a common tactic that they have used for years. This targeting is widespread throughout the country and not limited to the capital or any geographic region due to the nature of BNP and AL’s national political machines (Early Warning Project 2015).

Thailand
The Southern Muslim Insurgency stems from the annexation of the three southern provinces, Pattani, Narathiwat, and Yala, in 1909 by Siam, now modern-day Thailand. Yet the conflict has moved beyond wanting independence for the three southern provinces. Military and police forces of Thailand are often targeted by Southern Muslim Separatists over independence claims while civilians are targeted due to ethnic conflict between the Thai Buddhists and Malay Muslims (Combating Terrorism Center 2015).

In 2015, all events targeting civilians occurred in the south, with one exception. Human rights organizations such as Human Rights Watch and Amnesty International have condemned Southern Muslim Separatists for targeting civilians, noting it is a violation of international law. Yet 2015 was not the only year to witness the targeting of civilians in Southern Thailand. Since the early 2000s, the conflict has seen over 6,000 casualties. According to reports around 90% of these casualties have been civilians of the ethnic Thai Buddhist and ethnic Malay Muslim populations (Human Rights Watch 2015). In 2014 at least 50 civilians died in the conflict, while 16 have died so far in 2015  (International Business Times 2014).
Experts do not expect the Thai government or military to increase their pressure on the Southern Muslim Separatists. At present the military has already deployed over 150,000 troops to the region, while the insurgent forces are estimated to be between 3000 and 9000 (CNN 2013).  While violence continues both against civilians and government forces,the levels of violence are kept at a relatively low rate and are contained to the southern three provinces, Because only one Westerner has been killed in the conflict so far the central government has not been pressured by other governments to eliminate the insurgency for good (Combating Terrorism Center 2015).
Over half of violent events targeting civilians in South and Southeast Asia in 2015 were committed by unidentified armed groups. In many cases, such as Pakistan and India, this large amount of unidentified armed groups makes it difficult to discern the intentions of these groups when they target civilians. However, in Bangladesh and Thailand, it is often clear what specific violent actor is targeting civilians. In Bangladesh, political rivalry between the two national political parties has caused much of the violence against civilians. In Thailand, a long-standing Southern Muslim Insurgency has targeted civilians as part of an ethnic conflict between the Malay Muslims and Thai Buddhists.