Nepal: Paving the Way for Reconstruction 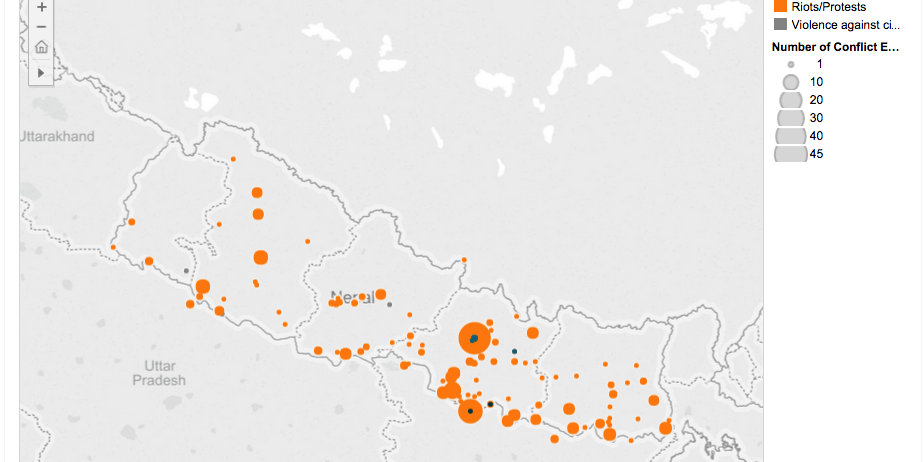 Introduction
The powerful 7.8 magnitude earthquake that struck Nepal on 25 April 2015 was followed by a series of strong aftershocks that changed the political landscape drastically – at least in the short term. Nine years of protracted political power struggles and negotiations over an overdue constitution were replaced by national and international disaster relief activities. Political unrest ceased and the major parties came to understand quickly that a joint approach was needed to deal with the current crisis and to plan for a successful reconstruction. But years of political instability had left Nepal badly prepared for the disaster and hampered an effective and coordinated aid distribution. Against this background, an agreement on a new draft constitution was signed on 8 June by major political parties and hailed as ‘major milestone’ by UN Secretary General Ban Ki-moon. It sparked hope to overcome the transitional phase of national politics of almost a decade and to provide the much necessary space to rebuild earthquake shaken areas in a peaceful manner. But optimism was quickly replaced by renewed violent quarrels over the proposed federal model in Nepal’s South and West and more than 40 people were killed in clashes with the police by 15 September. Amid these violent protests the constitution was finally passed on Wednesday, 16 September 2015, by the Constitution Assembly (CA) with more than two-thirds majority (Kathmandu Post, 17.09.2015). The finalization of the constitution marks the completion of a major milestone set by the Comprehensive Peace Accord in 2006. Some minority groups, however, still disagree with the borders and sizes of the provinces and are likely to continue their protests demanding a model that ensures greater autonomy.

9 years of political power struggle
A long history of exclusionary governance drove many, headed by the Maoists, to rise up against the state, which ultimately led to Nepal’s 10-year ‘People’s War’ (1996–2006). The war ended through the Comprehensive Peace Accord in November 2006, announcing a new era in Nepal’s history with the establishment of a CA to draft a new constitution, ensure equality, and end marginalization through the creation of federal provinces among other measures. Under this accord, Maoists represented by the Unified Communist Party of Nepal (UCPN-M) were allowed to take part in the government in exchange for disarming and reintegrating their fighters. Tensions between an elitist centre, Maoists and other political groups, however, continued sparking widespread protests, strikes and violent clashes.

The first CA was elected in April 2008 with landmark levels of inclusion and UCPN-M won a majority of the seats. Of the 601 members, 197 were women, 201 were Brahmin/Chhetri (high Hindu Nepalese castes), 202 were Janajatis (indigenous people), 136 were Madhesi[1] and 50 were Dalits[2] (International Alert, 2015). Yet, the CA was dissolved four years later, mainly because of its inability to reach a consensus. In the subsequent November 2013 elections, the more conservative Nepali Congress (NC) and the Communist Party of Nepal –United Marxist-Leninist (CPN-UML) overshadowed the UCPN-M and formed a coalition. But again, the new CA failed to meet various deadlines to draft a new constitution (the latest being January 22). The main political parties continued to argue over key issues. Each missed deadline in the constitution drafting process triggered new civil unrest across the country.

In the last nine years, Nepal’s numerous minority groups have increasingly voiced their calls against a central elite in Kathmandu and demanded equal political say and representation. In particular the in the southern Terai region living Tharu and Madheshi communities have been demanding their own identity-based provinces.

Security remains particularly fragile in Nepal’s Terai and Eastern Hill districts, where organized and often armed groups operate (Bogati, 2015: 12). Some of these groups are reported to have political agendas or associations, while others appear to be purely motivated by potential economic gains. The activities carried out by politically-linked groups are not only political (e.g. strikes) but also criminal (e.g. abductions, intimidation, assaults and forced donations/extortion) in nature (International Alert, 2015). Yet, the number of violent incidents by politically-motivated armed groups, according to ACLED’s data between January and August, remains low, with five reported incidents, The discontent of different minority groups as well as former combatants over the political stalemate, however, presents a fertile ground for recruitment. It is important to keep a close eye on future developments on activities carried out by Nepal’s numerous non-state armed groups.

Earthquake hits Nepal
The quake that hit Nepal on 25 April was the worst that has struck South Asia in more than 80 years. More than 8,000 people died in the disaster and the subsequent aftershocks. 18,000 people have been injured, 750,000 houses left ruined, and approximately one million people became homeless. (Denver Dialogues, 02.06.2015). In addition, with the monsoon rain that started in June that facilitates the spread of deadly deceases, the situation has taken on threatening dimensions.

Nepal’s political instability had a direct impact on its disaster preparedness. Although, the government passed its National Strategy for Disaster Risk Management in 2008, progress in its implementation was slowed by personalized political power wrestling with the constant turn over of government officials (Deutsche Welle, 27.04.2015). Consequently, the government failed to respond effectively to the earthquake disaster. Instead, it decided to channel all aid money through the Prime Minister’s Relief Fund enraging and agitating many Nepali citizens (My Republica, 01.05.2015).

Draft constitution endorsed
Despite initial difficulties, major political parties realized quickly that they needed to overcome political divisions in order to respond effectively to the disaster and to create the trust that was desperately needed to ensure accountability and attract international donations. Nepal has been a major recipient of international aid for the last 60 years, but successive governments have often failed to spend allocated resources responsibly and transparently. There have been reports of corruption and political patronage siphoning off large amounts of money (NZZ, 02.05.2015).

In a major breakthrough, – while under the pressure of the devastating earthquake – Nepal’s Drafting Committee has endorsed the first draft constitution, which envisions 8 federal provinces and recognizes the country as secular, inclusive and multi-ethnic nation (Economic Times, 29.06.2015). Only a few days later on July 7, the Constituent Assembly (CA) endorsed the draft constitution, driving parties to fast track the drafting process in an effort to pass the draft by mid-August.

The draft was immediately criticized by opposition and community representatives for not addressing longstanding demands including issues of federalism and secularism. The document was labeled as ‘not only confusing but also directionless and vague’ and ‘leading to a fresh wave of conflict’ (Himalayan Times, 22.07.2015). In addition, the government provided only little time to collect feedback from all districts, as only two days were allocated for consultations. An alliance of Madhesi organizations and ethnic Tharu called for strikes and demonstrations and brought the situation to a boiling point. In Kathmandu and many southeastern and western cities, demonstrators clashed with the police, leaving dozens injured on both sides. In August,15 agitated protesters were killed in clashes with the police, including police officers who lost their lives in Tikapur on 24 August (My Republica, 25.08.2015). This sparked fears of wider violence in more towns, and of a crackdown by the police and army, which were deployed to enforce calm. In addition, protests and strikes were also called by the Chand led UCPN (M) breakaway faction criticizing UCPN (M) for giving away its original demands, as well as by the right-wing monarchist Rastriya Prajatantra Party (Nepal) (RPP-N) demanding that Hinduism is enshrined as state religion. Despite ongoing protests, the constitution was finally endorsed on 15 September, setting up Nepal as a secular federation of seven states. All the Madhes-based parties boycotted the CA process, while the RPP-N voted against the new constitution (Kathmandu Post, 17.09.2015).

With this, reports on disaster response and aid effectiveness in Nepal’s villages were again replaced by news on political unrests. National newspaper reported numerous clashes between protesters and the police criticized the latter for excessive use of force. Four months after the earthquake the national context does not look significantly different from before.

If the new constitution is to avoid renewed political deadlock and to pave the way for reconstruction efforts, it is crucial that its provisions are implemented inclusively. Effective disaster response depends on a stable and functioning government that will be accountable for the reconstruction work that will mark the next decade. A constitution that does not address demands made by opposition parties and minority groups is likely to further trigger political unrest over the same issues.


[1] The Madhesi are a historically marginalized population in the Terai region bordering India, where they have strong ethnic and linguistic cross-border ties.
[2] Dalits were historically excluded from the Hindu varna system, and are still ostracized as untouchables.