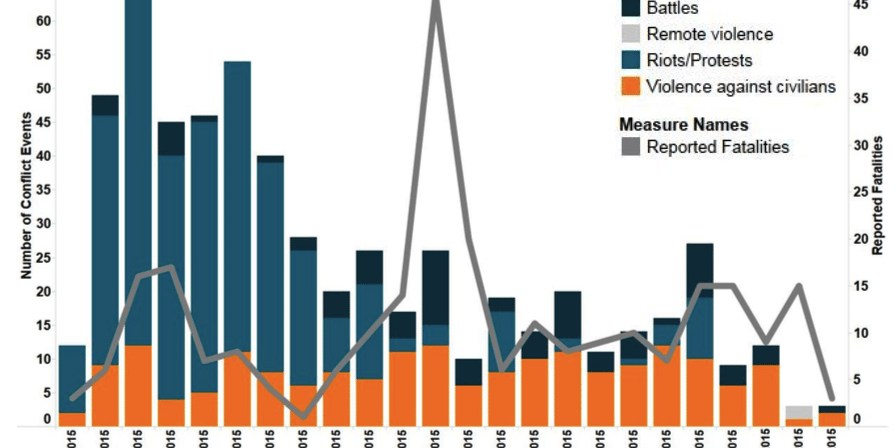 The number of conflict events and fatalities has continued to decrease in Burundi since its high point in mid-July, but the political conflict engulfing the country is far from resolved (see Figure 1). The main source of contention within Burundi is a conflict between those who support Nkurunziza’s third term and those that oppose it. Supporters point to Article 96 of the constitution, which says the president is elected by universal suffrage and can renew his/her contestation once, and the fact that Nkurunziza was first elected by parliament. Opponents point to the Arusha Accords, which ended the decade-long civil war, which stipulates that no leader can stand for more than two terms. 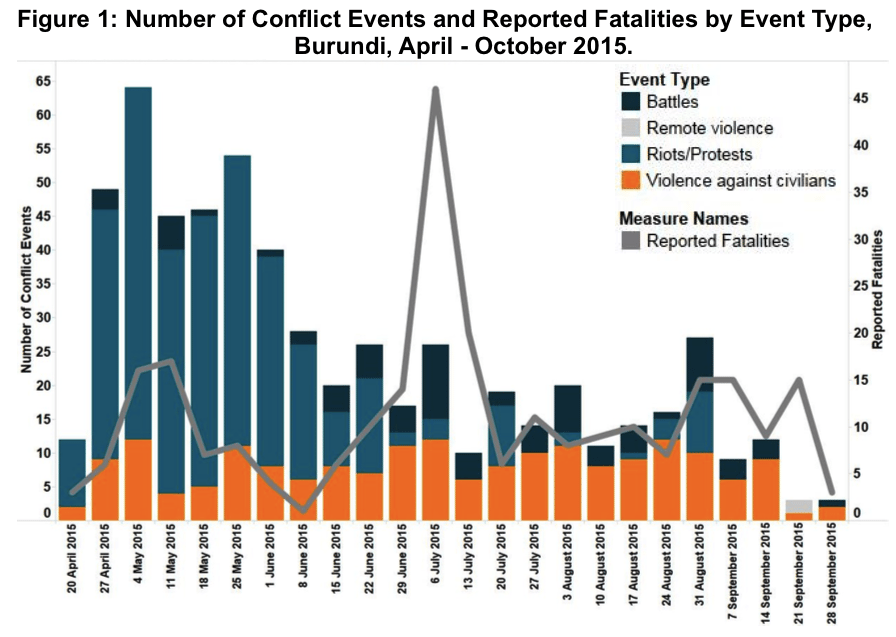 Those opposed to Nkurunziza’s third term did not just include opposition parties and civil society activists but former insiders within Nkurunziza’s regime. The attempted coup against the government in May was launched by Major General Godefroid Niyombare and Leonard Ngendakumana, both senior figures within Nkurunziza’s security apparatus who were dismissed in February 2015 after opposing the president’s attempt to run for a third term (Iaccino, 13 May 2015; Justice, 10 July 2015). Fatalities dramatically spiked in July after defecting soldiers loyal to these two figures engaged the Burundian army in the far north of the country. There is suspicion that these forces are receiving support and sanctuary from Kigali (Africa Confidential, 20 August 2015).
In spite of this instability, Nkurunziza won his third term with 69.4% of the vote in late July, helped by a large-scale boycott by other parties opposed to the third-term mandate (Al Jazeera, 25 July 2015). Nkurunziza’s new government is composed mainly of his hardline supporters from within his party. The only opposition included within the new government belong to the National Liberation Forces (FNL) and include its leader, Agathon Rwasa (Africa Confidential, 20 August 2015). This may be because the FNL has time and again proved its willingness to use arms. The group continued fighting Nkurunziza’s government until 2009, and Rwasa has previously threatened a return to armed conflict (Human Rights Watch, 14 August 2014). Rwasa and FNL did not boycott the elections and secured 18.9% of the vote (Al Jazeera, 25 July 2015).
However, Rwasa’s participation in the new government has split the FNL; his collaboration with Nkurunziza may not lead to a decrease in violence or enhance the president’s political support. Former colleagues have labelled Rwasa a traitor and dissident FNL members are allegedly gathering at the Burundi-Rwanda border with armed militants of the opposition Movement for Solidarity and Development (MSD) (Africa Confidential, 20 August 2015).
Since Nkurunziza’s electoral victory, violence against civilians continues to be the most common form of political violence. The primary perpetrator of violence against civilians since mid-June has been ‘unidentified’ armed groups. The political affiliations of the victims are unknown in the vast majority of cases (85%). However, in the cases where the victim’s affiliation is known, supporters of the ruling party, including the Imbonerakure youth militia and off-duty military and police personnel, are disproportionately represented (see Figure 2). 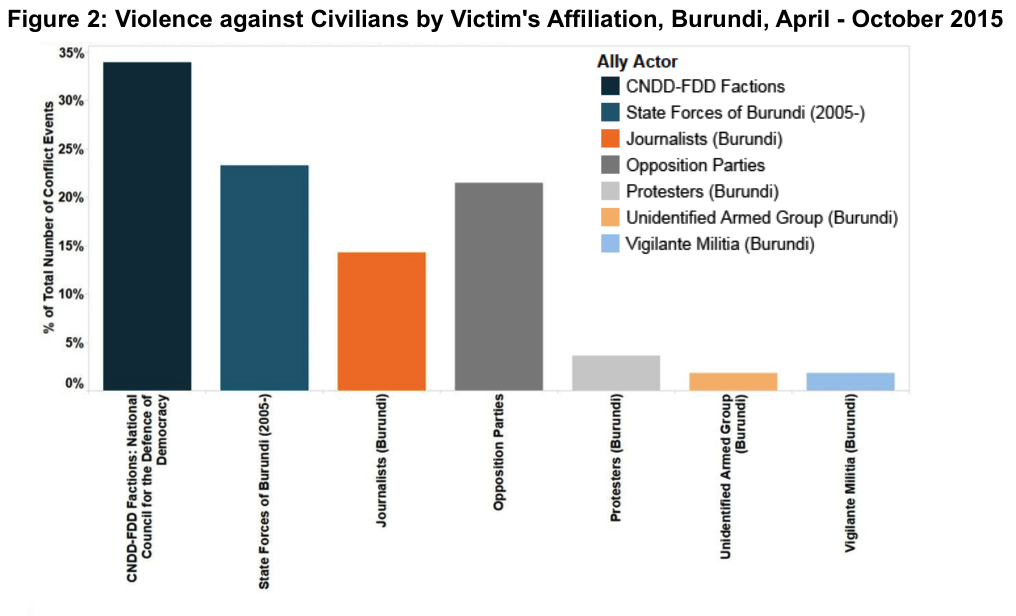 Prominent victims include former head of the intelligence agency Adolphe Nshimirimana, widely suspected to be the real force in the CNDD-FDD and the leader of the Imbonerakure (Africa Confidential, 20 August 2015). In many cases, including the killing of Nshimirimana, assassins have used military hardware or have been in military/ police uniforms (ibid.). This suggests that the attacks against pro-Nkurunziza figures are linked to either soldiers that defected during the May coup attempt, or factions still present within the military.
Another potentially disruptive factor is the government’s expressed intent to revise Article 129 of the Constitution, which sets the quota of Hutus and Tutsis in government (Africa Confidential, 20 August 2015). The current crisis has not yet politicised ethnicity or used it as a mobilisation factor, as support and opposition for Nkurunziza has so far crossed ethnic boundaries. However, should Nkurunziza attempt to renegotiate the ethnic balancing that has so far prevented a return to the ethnocides of the Civil War, the pro and anti-regime camps may become ethnically defined.