The Conflict Patterns and Role of Pro-Government Militias 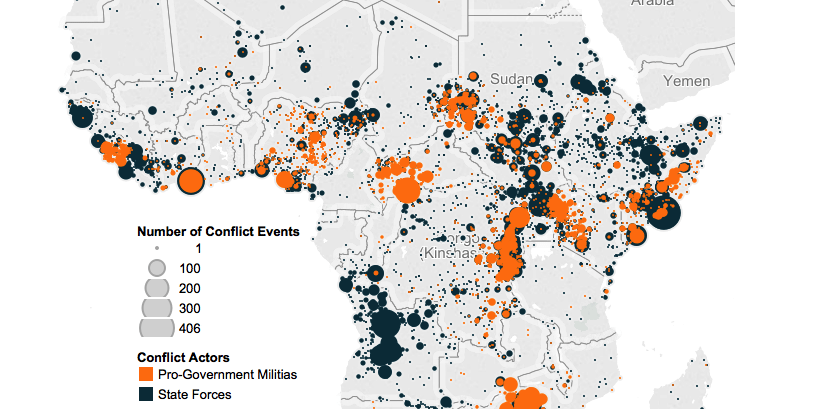 Pro-government militias (hereafter PGMs) are a growing risk to the safety of civilians and stability of developing states. Of all active militias operating on behalf of political elites (e.g. rebel leaders, politicians, political parties, warlords, military, government officials, etc.), those associated with the state have the most pervasive and negative impact on civilians.
Why do states with active military forces create and support militias? Much of the literature points to delegation explanations, where militaries and states delegate some or most of their activities to these more informal allied forces for two reasons: (1) a government lacks the capacity for violence in a specific area or larger spaces and hence uses these groups in those specific areas, and/or (2) governments do not want to be accountable for the activities that are undertaken by militias, and hence using these groups allows them plausible deniability.
In line with the capacity argument, PGMs ought to operate as replacement forces where the state is not active, and are tasked with carrying out violence on behalf of the state. Therefore, the comparative patterns of activity between state and PGM forces ought to be similar, but conducted in different spaces and locations. However, capacity theory does not account for why PGMs are seen in spaces in which the state itself is also active (see Figure 1): in Sudan or Zimbabwe, militias operate alongside strong and able militaries, often conducting similar activity. For states with less military capacity — including DR-Congo, Somalia, and Nigeria — PGMs supplement, rather than replace, state forces. In particular, they may emerge to combat similar opposition organizations or engage with opposition supporters while the military and police engage with other distinct, but similarly situated threats. Why then are these groups — active in the same areas, using the same tactics, and combatting the same opposition — kept distinct from state military forces? 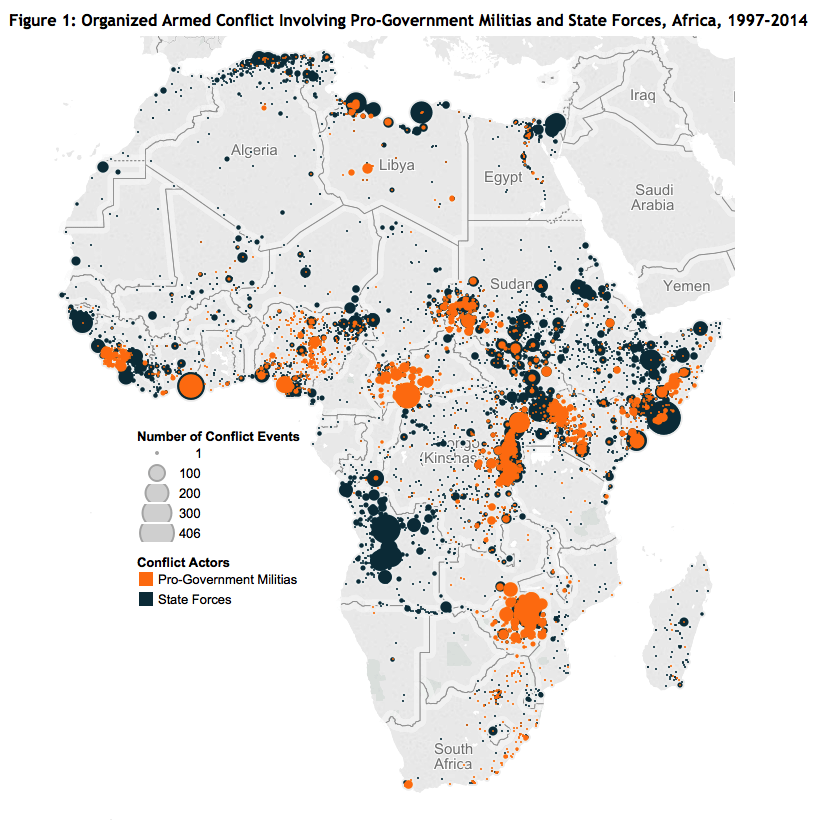 The accountability argument suggests that PGMs conduct offenses that governments cannot or do not want to be deemed accountable for (see: Ron, 2002; Alvarez, 2006; Staniland, 2012; Mitchell, Carey, and Butler, 2014; Carey, Colaresi, and Mitchell, 2015). States may choose to do this to avoid high domestic or international scrutiny (Carey et al., 2015) that may affect international standing, stability, aid, or neighbouring relations. The implications for this argument are that PGM activity profiles differ from state forces in observable and crucial ways including engaging with civilian targets, activities with high fatality counts, sexual political violence, urban campaigns, etc. Further, while actions by militias and state forces can occur concurrently and within the same spaces, PGMs should be primarily or exclusively involved in violence that the state is not partaking in, such as civilian targeting. However, when examining conflict in Africa between 1997 and 2014, the most lethal instances of violence against civilians are not carried out by PGMs. In fact, on average, instances in which the state has targeted civilians have been deadlier than instances in which PGMs have carried out this violence, suggesting that the state does not in fact delegate high intensity activity to PGMs in order to absolve itself (see Figure 2). 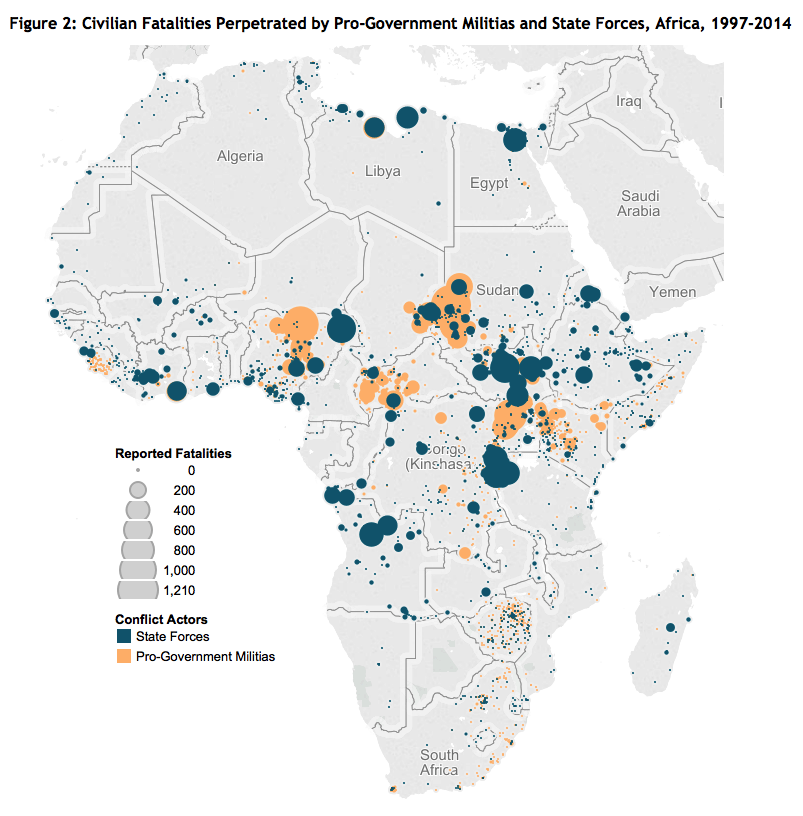 Observed patterns of activity across African states suggest that ‘delegation’ does not adequately explain the creation, function, and actions of PGMs. In a new working paper, Kishi and Raleigh argue for an alternative interpretation for the use of PGMs, suggesting that these groups are a consequence of the structures of governance supporting developing states, and function as a critical component in upholding power structures. This interpretation of indirect rule and competition — or violence ‘management’ — emphasizes that informal, private armed groups are a necessary component of modern governance where political competition is lethal, positions on government hierarchies are determined by coercive potential and force, and the state is actually a collection of often competing interests and agendas (see De Waal, 2009). PGMs are an equal and separate component of purposefully decentralized and overlapping forces, and are used for a specific purpose therein. While there are multiple official agencies who — to a greater or lesser degree — can deal with threats to the state (e.g. rebel forces), PGMs are used by governing political elites to combat personal, party, and departmental competition. This would imply that a state leader (s) uses PGMs when his/her personal power or position is compromised by alternative political contenders.
Introducing a newly-created dataset on PGMs and their conflict activity — spanning the entirety of the African continent from 1997 to 2014, and expanding the definition of pro-government affiliations — Kishi and Raleigh find that the prevalence of conflict activity involving PGMs is highest in states with high levels of institutional competition — measured as high ethno-political heterogeneity; periods of heightened political competition; and the number of armed, active, named opposition groups contesting the state. These findings support the argument that PGMs are used to carry out competition amongst elites who vie for increased institutional power.
Across Africa, PGMs represent an informal structure of force that mirrors the formal security structure in states. These groups are critical for several reasons: they represent an important and growing fixture of modern conflict; they are most active outside of civil war periods, in the poorly-defined and under-researched ‘domestic instability’ sphere; they allow governments to perpetuate intense and fatal violence without direct attribution or sanction; they have become central to the ‘normalized’ political violence that affects developing states; and militias generally are the main modality of violence through which ‘inclusive’ political violence — or elite competition — is experienced. PGMs operate as supplements to particular branches and elites in governments, as the internal fractures within developing countries’ institutional structures are often significant and exert a far greater threat to the stability of the state than external threats. Indeed, these internal feuds and the mistrust within branches of government are often a more serious challenge than from outside the regime, typically represented as rebels or insurgents. Internal government threats have been a greater concern to African leaders — in the form of coups, purges, putsches, and mutinies — than civil wars, which are still relatively uncommon phenomena (Roessler, 2011).

Kishi and Raleigh’s working paper — titled “Hired Guns: The Conflict Patterns and Role of Pro-Government Militias”— can be accessed here. Questions can be directed to rk310[at]sussex.ac.uk.