Sources of Income and Political Conflict 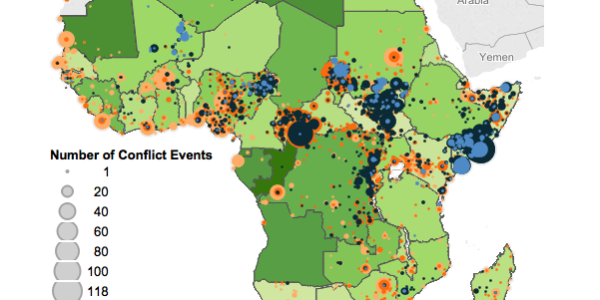 Strong state capacity is difficult to attain in low-income countries where the state lacks access to resources to aid in effectively implementing policies. As a result, incomes are often used as a proxy measurement to determine the strength of state capacity, and states with lower incomes experience some of the highest levels of conflict (see: Dixon, 2009). Yet, efforts at alleviating poverty including aid (Nunn & Qian, 2014), foreign direct investment (FDI; Nigh and Schollhammer, 1987) or resource rents (Ross, 2004; Humphreys, 2005; Béland & Tiagi, 2009) can also induce conflict through fostering dependence, grievances, or greed in would-be rebels.

Using income and investment data from the World Bank Development Indicators, and aid data from the AidData project, the effect of sources of income on future conflict and violence in Africa is assessed.

The presence of resources are associated with increased violence rates; the ‘resource curse’ suggests that natural resources makes the ‘prize’ of the state more attractive to rebels (for example, see Humphreys, 2005). While Libya and DR-Congo – where natural resource rents make up a significant portion of each state’s GDP – see much conflict activity, other states that also rely significantly on natural resource exports – such as Mauritania, Equatorial Guinea, and the Republic of Congo – do not exhibit the same conflict activity, suggesting that this greed-based hypothesis may not solely describe conflict dynamics in Africa (see Figure 1). 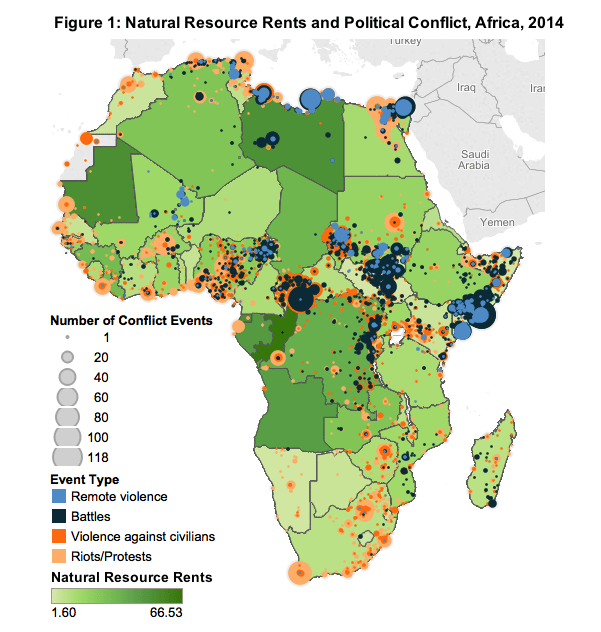 Many argue that oil rents are especially deleterious (for example, see: Ross, 2004; Collier & Hoeffler, 2004). The relatively high levels of conflict in Libya – coupled with the fact that oil rents make up a significant proportion of its GDP – seem to corroborate this. However, other states that also rely heavily on oil rents – such as the Republic of Congo, Angola, or Equatorial Guinea – do not exhibit this same propensity toward conflict, but clearly indicate that resources are associated with autocratic politics.

Aid assists post-conflict states, but it also may play a role in creating conflict. Some studies find that increased aid decreased civil conflict duration (De Ree & Nillesen, 2009), other that is increases the risk and duration (Nunn and Qian, 2014). Conflict may increase when the state has more access to aid. Kishi and Raleigh (2015) find that increased access to Chinese aid heightens state repression in the form of battles and bombings including state forces and the targeting of civilian forces by the state. By securing access to income that it can use as it sees fit, the state is able to capitalize on this increased access to resources to secure its authority and suppress opponents and competition. In line with this finding, Nigeria and Egypt – two countries that rely significantly on aid inflows from China – show intense conflict activity.

Investment too can impact the conflict topography of a state as the state and elites may seek to create and maintain specific environments in order to attract investors.  Nigh and Schollhammer (1987) observe a positive correlation between FDI inflows and intrastate conflict, though examples such as Mozambique and Liberia, where FDI dependence is higher, do not exhibit intense violence. It may be the case that increased FDI minimizes the risk of conflict (Bussmann, 2010), which could point to why states combatting prolonged crises – such as DR-Congo and the Sudan – see minimal FDI inflows (see Figure 2). 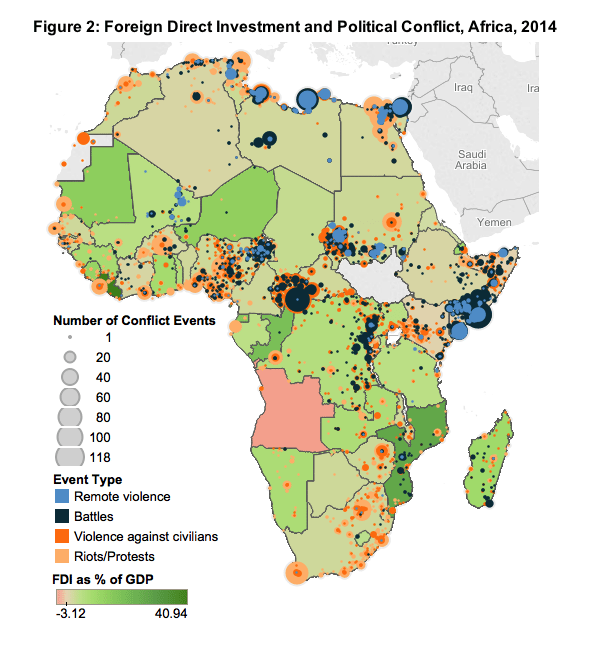 In a new working paper, Raleigh and Kishi find that different sources of income incentivize variations in state predatory behavior. Because African states are more beholden to external economic providers over internal income generation through taxes, etc., the dominant forms of external economic flows can create environments where state violence is more likely.

For more on the impact of sources of income on conflict across the African continent – as well as how various other mechanisms may shape conflict patterns and dynamics in Africa – see the Informed Humanitarian: a resource for practitioners and policymakers.