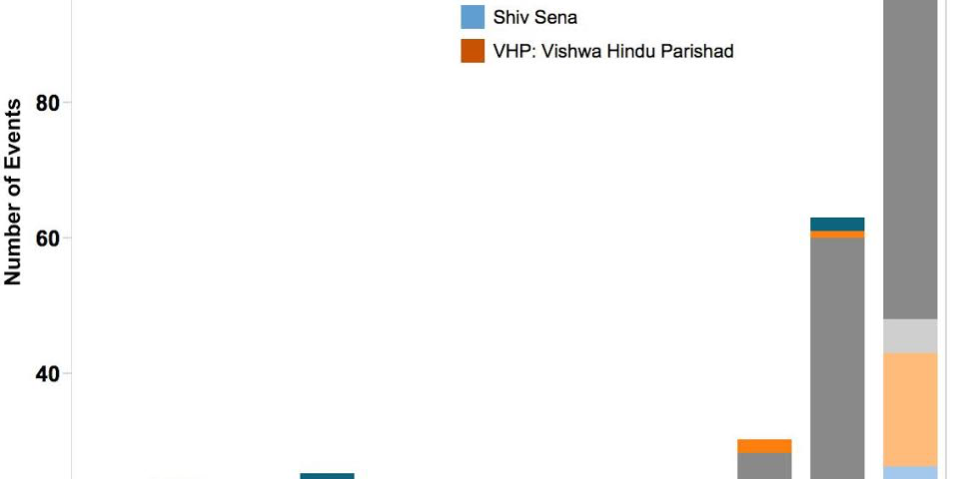 Over the last three months, demonstrations and violent clashes against Muslims and Hindu extremists have sparked public outcries against the Bharatiya Janata Party (BJP)-led government for deepening fissures between the two communities. Although communal tensions between Muslims and Hindus in India is far from unexamined (see ACLED’s Conflict Trends Report No. 3 for an analysis of rising Hindu fundamentalism), remonstrations by prominent public figures against the Modi-led government has underscored a growing sentiment that BJP and BJP-allies have fostered an atmosphere of intolerance towards Muslims (The Guardian, Oct. 2015). ACLED’s dataset confirms a rise in reports of violence and political activity spurred by growing dissatisfaction in the government, particularly around religiously fueled issues.

Several notable incidents illustrate the severity of the recent spate of violent clashes. In September, a mob in Dadri, Uttar Pradesh killed a Muslim man following unfounded rumors announced at a Hindu temple that his family was consuming beef (Time, Sep. 2015). The attack begot further violence, sparking ten additional riots and protests in surrounding communities. Similarly, in October a major protest by right-wing Hindu nationalists against a pro-beef rally resulted in the death of a young teenager in Kashmir (India Today, October 2015). In Karnataka, members affiliated with the Popular Front of India, a banned Islamic group allegedly connected to terrorist attacks, murdered a Hindu who investigated illegal slaughterhouses (New Indian Express, October 2015). In December, groups intercepted trucks suspected of transporting cattle and attacked the drivers near Delhi (The Hindu, December 2015).

Consuming or slaughtering beef has been the common denominator in many of these clashes. Serving cow, a sacred animal for Hindus, is considered blasphemous. ACLED data illustrates that 80% of beef related protests have occurred since September. Part of the increase can be attributed to recent efforts by BJP leaders to curb the dietary habits of certain groups (Hindustan Times, Nov. 2015). Meanwhile, BJP opposition parties have challenged the beef consumption bans through lawsuits (Indian Express, October 2015) and by holding beef-eating festivals throughout India (DNA, December 2015).

These beef-related attacks are associated with Sangh Parivar, an outfit of individual right-wing Hindu organizations. They share an adherence to Hindutva, a Hindu-nationalist ideology that seeks to establish the hegemony of Hindus. As the figure below indicates, these groups primarily include–in addition to the BJP–Rashtriya Swayamsevak Sangh (RSS), Vishwa Hindu Parishad (VHP), Shiv Sena, Akhil Bharatiya Vidyarthi Parishad (the student wing of RSS), and Bajrang Dal. Compared to the beginning of 2015, these groups’ participation in demonstrations and clashes increased by 30%. Of the total events in which a Sangh Parivar organization was involved, 40% occurred in the last three months of 2015.

Critics assail BJP officials for condoning or exacerbating the violence. During the previous electoral campaign, then-candidate Modi garnered support by stoking fears of a “Pink Revolution”–i.e. an increase in cow slaughter (The Hindu, April 2014). This might explain his notable silence in condemning the Dadri murder (Indian Express, October 2015). But other BJP officials have also provoked tensions with vitriolic remarks. In December, the Chief Minister of Uttarakhand, a BJP official, threatened: “We warn them against a Dadri-like incident in Telangana. We can both give our lives and take life for the sake of protecting the cow” (DNA, December 2015). The hostility has infected legislative decorum as well. In November, a BJP leader threatened the Chief Minister of Karnataka, stating: “Let him eat beef…If he does so, he will be beheaded. We won’t think twice about that” (Deccan Herald, November 2015). And in October, BJP Legislative Assembly Members beat a fellow Muslim Legislator in Kashmir for serving beef at a private dinner party (BBC, October 2015).

Yet despite these offenses, BJP officials disavow promoting intolerance (Indian Express, November 2015). Moreover, they categorically deny that intolerance is even increasing, pointing to the history of religious violence that existed prior to the party’s ascent. However, as the ACLED dataset indicates, and as anecdotal news reports suggest, Hindu extremists are increasingly attacking Indian Muslims over perceived transgressions.

Stemming the recent tide of religious clashes will prove difficult for a political party that commonly promotes a sectarian ideology for political expediency. As Stanford Historian Audrey Truschke stated, since the end of colonialism “the modern Hindu right has found tremendous political value in continuing to proclaim and create endemic Hindu-Muslim conflict” (Stanford, September 2015). Although the recent spate of violence is a multifaceted issue, divisive commentary and restrictive dietary laws are certainly not likely to abate the recent trend. 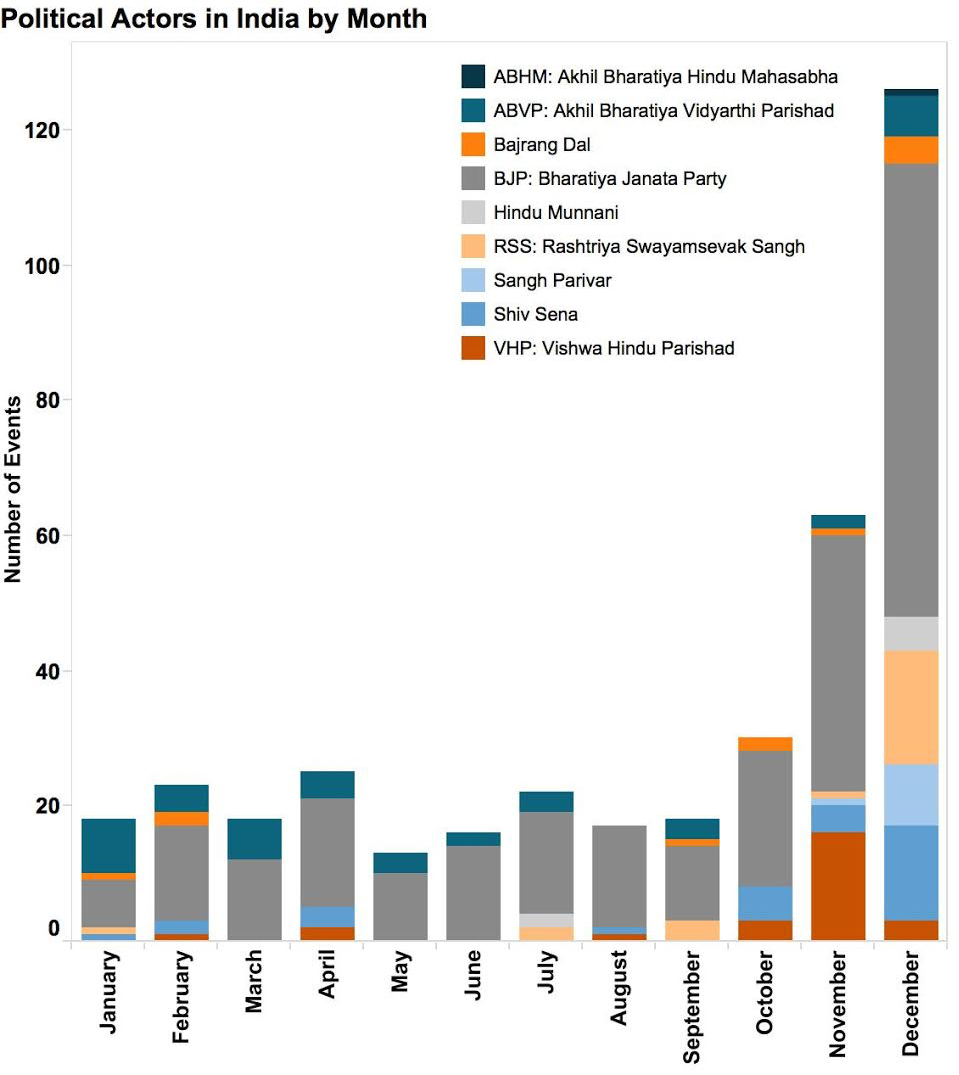