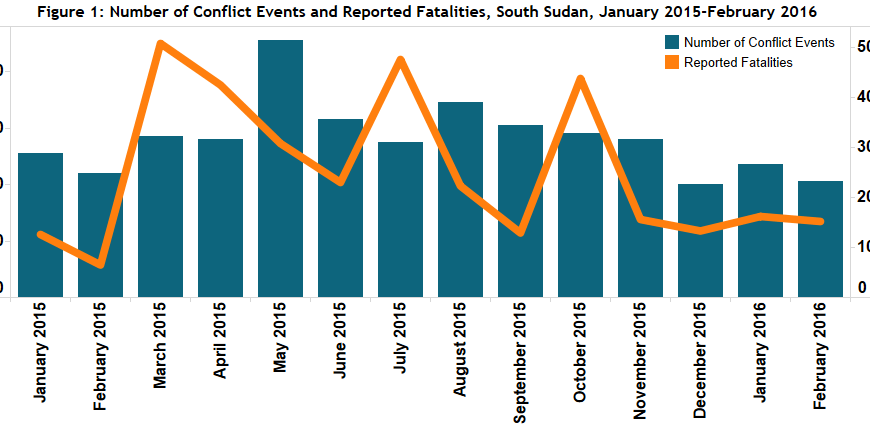 Progress was made in the South Sudan peace process. Riek Machar, leader of the rebel Sudan People’s Liberation Movement/Army – In Opposition (SPLA-IO), returned to government as the First Vice-President on 11 February (Africa Confidential, 19 February 2016). This marks Machar’s first return to government since he was fired by President Salva Kiir in 2013 in a purge which was the starting point of the ongoing civil conflict (De Waal, 2015). The peace deal is effective: the number of conflict events has continually dropped since the signing of the deal in August 2015 (see Figure 1).

In spite the peace deal, the Machar’s rebels have continued to fight. The SPLA-IO was active in over 20% of violent conflict events in September and December 2015.

There are two possible reasons for this continuation in rebel activity. First, Machar may not have complete control over the rebels. The rebels have, in the past, been described as a ‘loose coalition’ of ethnic rebels, political defectors and rebellious elites (UNHCR, 2014). The signing of the agreement has also split with SPLA-IO with rebel generals Peter Gadet and Gatoath Gatkuoth cutting ties with Machar due to their opposition of the powersharing deal (BBC News, 26 August 2015). Key generals advised Kiir not to sign the August peace deal and Kiir’s control over the military command structure is acknowledged to be weak (UNHCR, 2014; BBC News, 26 August 2015).

Second, the rebel coalition may be continuing its campaign in order to pressure the government to grant more favourable terms in a post-conflict South Sudan. There is already considerable disagreement over the future administrative structure of the country. The government is attempting to turn convert South Sudan’s ten existing states into 28 new units (Africa Confidential, 22 October 2015). The aim of this new administrative arrangement is to prevent Machar from getting control of the oilfields in Unity state, his home area, by splitting the state into three (ibid.). Kiir has already appointed the governors for the 28 planned which undermines the peace agreement which granted the opposition two out of the ten governorships and legislative parity with the government in the key battleground states of Jonglei, Unity and Upper Nile (Africa Confidential, 6 February 2016; BBC News, 26 August 2015).

The announcement of the 28 states has provoked localised fighting as disparate groups use violence to either gain an advantageous position in the new arrangement or protest against Kiir’s decree. Conflict has increased in Western and Central Equatoria and Bahr-el-Ghalzal, with groups such as the Mundi, Baka and Mundari forming armed militias to fight against the proposed divisions or annexations of their land (Africa Confidential, 19 February 2016; Sperber, 2016).

Even if the current peace deal contains, if not eliminates, the fight between Kiir’s government and Machar’s rebels, localised disagreements over the administrative division of the country could result in violence persisting in South Sudan long after a unity government is formed.