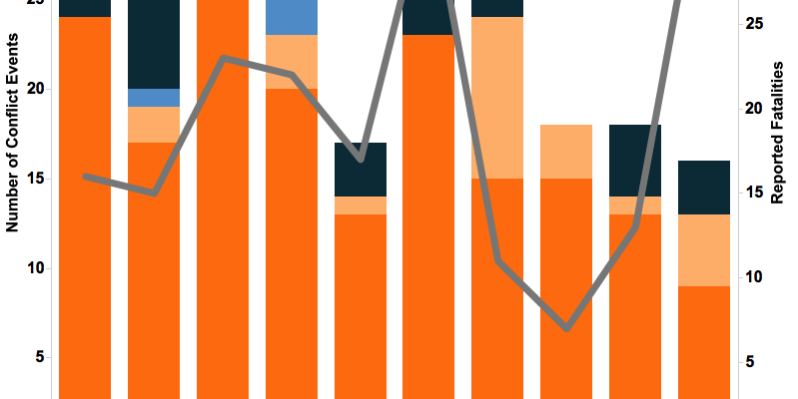 A new update of the recent unrest in Burundi, covering events from 26 April 2015 to 6 March 2016 has been released by ACLED. This update can be found here. ACLED has covered the Burundi crisis with regular data updates and blog posts since June 2015, relying on a combination of news sources and local crowd-sourced information from the 2015Burundi Project. Starting 1 January 2016, ACLED’s data and analysis for the local-level Burundi Crisis dataset is incorporating local crowd-sourced data from a local Burundi monitoring network. ACLED reports will continue to draw upon real-time data from key news sources as well as 2015Burundi coverage. As before, data from ACLED’s weekly real-time conflict data release covering Burundi continue to be pulled in here as well.

Summary of trends for the week of February 29:

The last day of February and first week of March in Burundi saw a consistent number of battles and incidences of violence against civilians relative to previous rates, yet also saw a large spike in reported fatalities. This increase is due to the discovery of 30 bodies in a mass grave in Mutakura on February 29. Bujumbura Mayor Freddy Mbonimpa stated that the victims were possibly members of the ruling party’s youth wing who supported President Pierre Nkurunziza (Bloomberg, 1 March 2016). Three United Nations (UN) representatives reported good access to government officials, intelligence services, and civil society in the course of their investigations of mass graves in the country (Deutsche Welle, 8 March 2016). The UN team plans to present its findings to the Human Rights Council on March 21.

Arrests and grenade attacks continued throughout the week. Police arrested at least five members of the rebel groups RED-TABARA and FOREBU in Cibitoke. Several were tied up and beaten; three people were taken to an unknown location. On March 4, an unknown group threw grenades in Kinama and Kamenge, injuring at least 11 civilians. On March 6, a grenade in Bugarama in Muramvya Province reportedly killed one civilian and injured six. And in Musaga, a police officer reportedly shot and killed a former rebel, and threw a grenade to injure three other former combatants.

The continued insecurity, human rights violations, and deteriorating economic situation have forced many to flee Burundi. The UN High Commissioner for Refugees recently reported that 250,000 Burundians have sought refuge in neighbouring countries, with Tanzania receiving the highest average of 1,000 new arrivals per week (UNHCR, 4 March 2016). 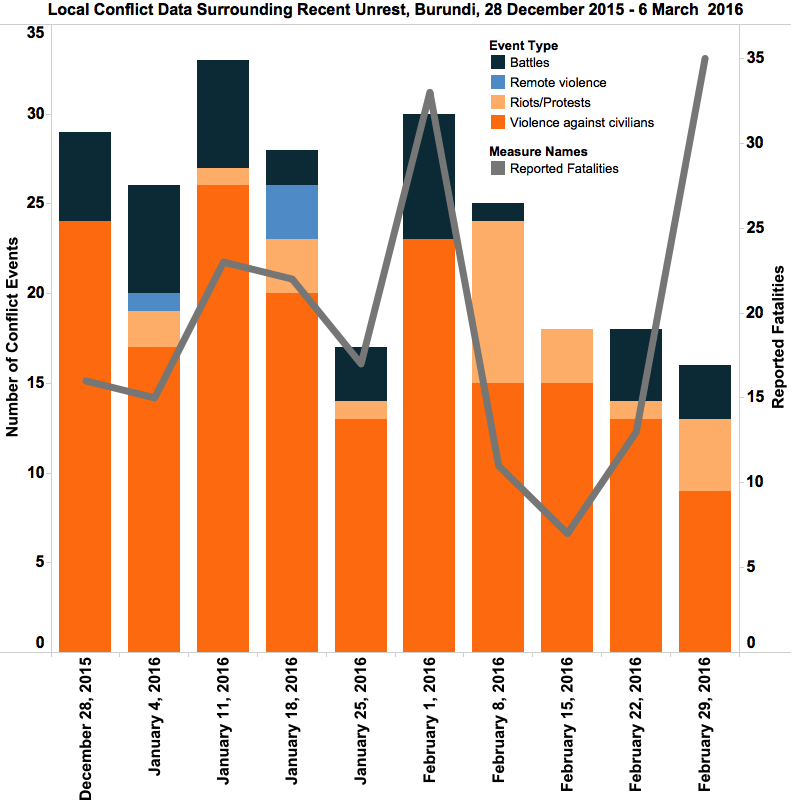 The local-level Burundi Crisis dataset covers data from 26 April 2015 through 6 March 2016. However, as we have altered our primary source of local-level data in 2016 – from 2015Burundi to a local Burundi monitoring source – we refrain from depicting data from both sources temporally on the same graph here. This is done to avoid increases in the level of reporting between the 2 sources inadvertently depcting changes in the level of conflict and protest occurring on the ground. We are in the time intensive process of backcoding 2015 events captured by the new data source.

The Armed Conflict Location & Event Data Project (ACLED) is a disaggregated conflict analysis and crisis mapping project. ACLED is the highest quality, most widely used, realtime data and analysis source on political violence and protest in the developing world. Practitioners, researchers and governments depend on ACLED for the latest reliable information on current conflict and disorder patterns.
12 March 2016
Share
TweetShare on Twitter Share on FacebookShare on Facebook Share on LinkedInShare on LinkedIn