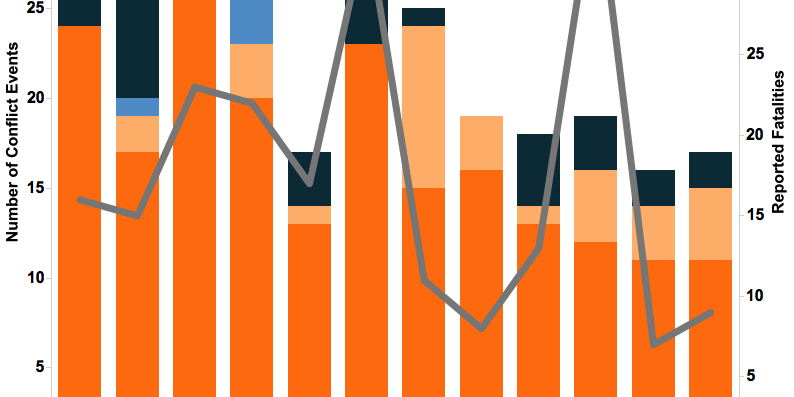 A new update of the recent unrest in Burundi, covering events from 26 April 2015 to 20 March 2016 has been released by ACLED. This update can be found here. ACLED has covered the Burundi crisis with regular data updates and blog posts since June 2015, relying on a combination of news sources and local crowd-sourced information from the 2015Burundi Project. Starting 1 January 2016, ACLED’s data and analysis for the local-level Burundi Crisis dataset is incorporating local crowd-sourced data from a local Burundi monitoring network. ACLED reports will continue to draw upon real-time data from key news sources as well as 2015Burundi coverage. As before, data from ACLED’s weekly real-time conflict data release covering Burundi continue to be pulled in here as well.

Summary for the week of March 14:

Burundi saw a steady number of reported conflict events, protests, and fatalities in the week of March 14. Contributing to the nine reported politically-related fatalities were the deaths of two members of the ruling party National Council for the Defence of Democracy-Forces for the Defence of Democracy (CNDD-FDD). Both officials were shot at close range on the night of March 15. Adrien Mudomo was killed in Mubira in Bururi Province, and Pascal Kazungu was killed in Mbizi in Makamba (Associated Press, 16 March 2016). Decapitated or bullet-ridden bodies were reportedly also found throughout the week in the provinces of Cibitoke, Ngozi, Bujumbura Mairie, and Gitega. On March 17, an unknown attacker reportedly detonated a grenade in Musaga, wounding five people. Police later arrested 28 suspects.

Only two battles are reported to have occurred in the week of March 14. On March 17, a policeman was shot and killed in Mugendo in Bururi. On March 19, unknown gunmen shot and wounded the chief Imbonerakure of Rukina area in Bujumbura Rural. The chief was shot in the leg, supposedly in retaliation for the youth militia’s recent arrests of anti-Nkurunziza protesters.

Pro-CNDD-FDD and anti-Rwanda protests continue to take place, particularly in the northern and eastern border provinces of Bubanza, Ngozi, Kayanza, and Cankuzo. Reports reveal a new trend of enforced participation in protests. At a pro-government march in Ngozi on March 19, the municipal leader of Gatika reportedly threatened that anyone who failed to participate would be considered an enemy of the state.

US Ambassador to the UN Samantha Power stated at a recent Security Council debate that presidents in the Great Lakes region are making “increasingly blatant power grabs to remain in office,” including the shut-down of media outlets and the arrest of opposition voices (Daily Nation, 23 March 2016). In response, representatives from Burundi and Rwanda warned US representatives against critical judgments against their leaders. Rwanda and Burundi ministers also accused each other’s countries of supporting one another’s rebel groups (Daily Nation, 23 March 2016). On March 16, amidst continued criticism from international parties, the Burundian Government freed 47 detainees as part of an agreement with the UN to release up to 2,000 political prisoners (ABC News, 18 March 2016). 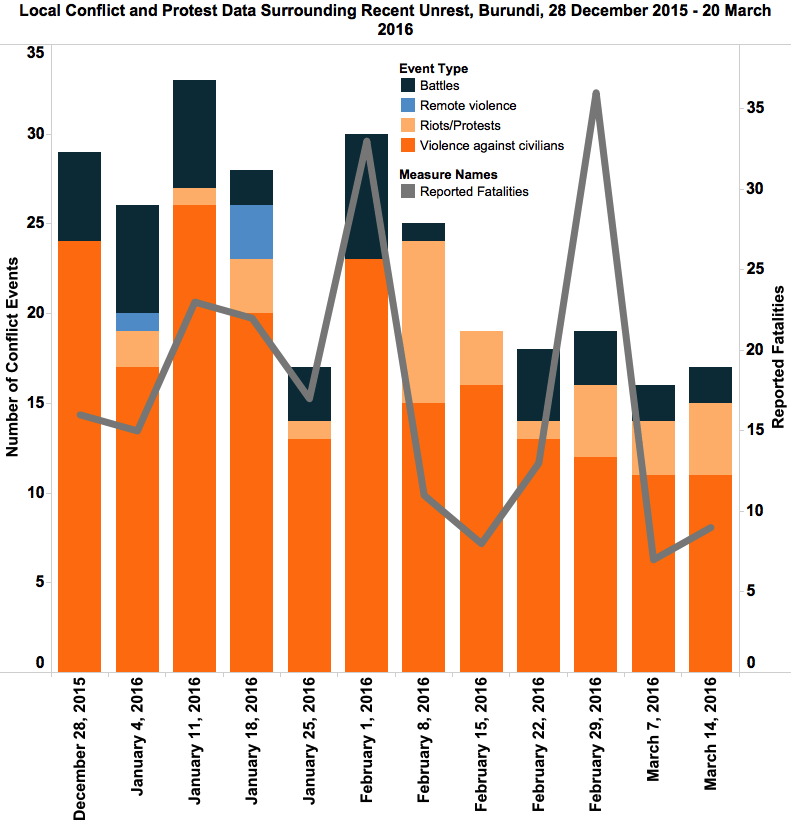 The local-level Burundi Crisis dataset covers data from 26 April 2015 through 20 March 2016. However, as we have altered our primary source of local-level data in 2016 – from 2015Burundi to a local Burundi monitoring source – we refrain from depicting data from both sources temporally on the same graph here. This is done to avoid increases in the level of reporting between the 2 sources inadvertently depicting changes in the level of conflict and protest occurring on the ground. We are in the time intensive process of back-coding 2015 events captured by the new data source.