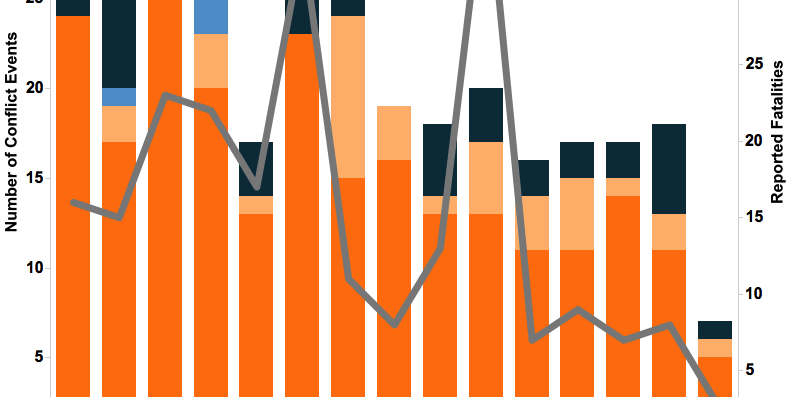 A new update of the recent unrest in Burundi, covering events from 26 April 2015 to 10 April 2016 has been released by ACLED. This update can be found here. ACLED has covered the Burundi crisis with regular data updates and blog posts since June 2015, relying on a combination of news sources and local crowd-sourced information from the 2015Burundi Project. Starting 1 January 2016, ACLED’s data and analysis for the local-level Burundi Crisis dataset is incorporating local crowd-sourced data from a local Burundi monitoring network. ACLED reports will continue to draw upon real-time data from key news sources as well as 2015Burundi coverage. As before, data from ACLED’s weekly real-time conflict data release covering Burundi continue to be pulled in here as well.

Summary of events for the week of April 4:

In the week of April 4, Burundi reported the fewest number of battles, incidences of violence against civilians, and fatalities in 2016 thus far. Although reported fatality counts have decreased in the past few weeks, the United Nations cites an increased trend in the targeting of police, military or political officials (Agence France Presse, 17 April 2016). On April 7, three gunmen stormed into a bar in Kamenge, shot an army officer dead, and fired a grenade at civilians. On the same day, the body of a soldier was found in the Carama neighbourhood of Ntahangwa.

The number of reported grenade attacks in public spaces also lessened in April. However, there were still at least two reported incidences in the week of April 4, including a grenade launched in Rwisabi in Gitega Province, which injured five civilians.

Imbonerakure youth militia continue to make arrests on the border province of Kirundo, alleging that people entering from Rwanda are spies. Reports states that throughout the country, police and security agents search and arrest residents suspected of housing weapons and hosting rebels or foreigners. People are often arrested without a warrant even when weapons are not found on the premises. Some fear that arbitrary arrests may be leading to enforced disappearances, though it can be unclear from reports and witness accounts whether an arrestee has been detained in a local jail or abducted to an unknown destination (US News, 13 April 2016).

Of the 250,000 refugees that have fled the country over the past year, many fear for their safety even after they have crossed the border. In Nyarugusu camp in Tanzania – the third largest refugee settlement in the world – Burundian refugees were reportedly followed by pro-Nkurunziza militia that attacked or threatened them inside the camp (The Guardian, 15 April 2016). Carina Tertsakian, Human Rights Watch senior researcher for Africa, stated: “Whether those threats are real or not, it’s alarming because it shows the degree of fear that Burundians are living with because of the violence inside the country, even when they have left” (The Guardian, 15 April 2016). 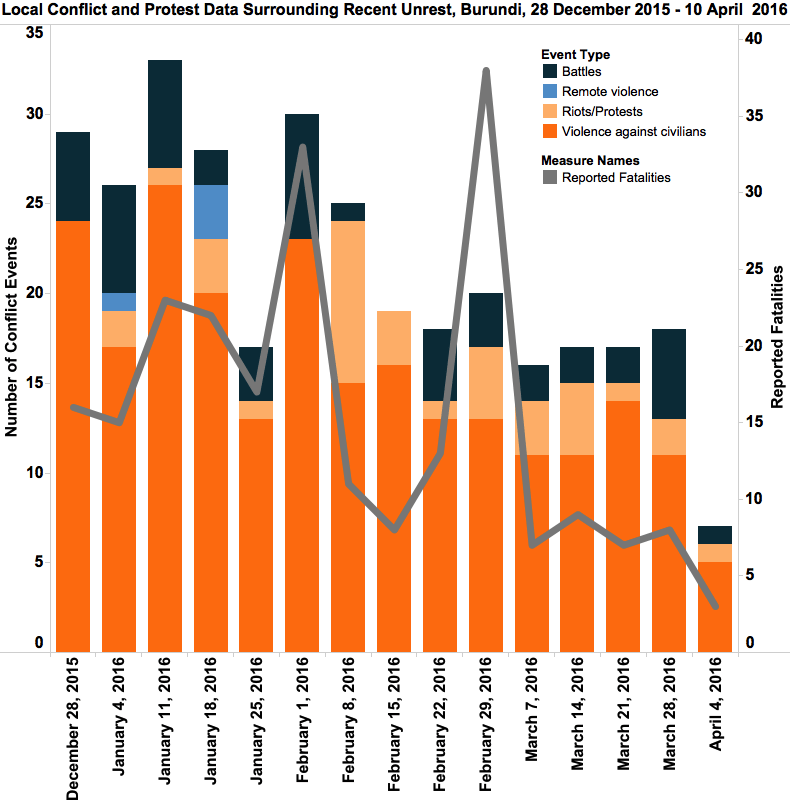 The local-level Burundi Crisis dataset covers data from 26 April 2015 through 10 April 2016. However, as we have altered our primary source of local-level data in 2016 – from 2015Burundi to a local Burundi monitoring source – we refrain from depicting data from both sources temporally on the same graph here. This is done to avoid increases in the level of reporting between the two sources inadvertently depicting changes in the level of conflict and protest occurring on the ground. We are in the time intensive process of back-coding 2015 events captured by the new data source.

The Armed Conflict Location & Event Data Project (ACLED) is a disaggregated conflict analysis and crisis mapping project. ACLED is the highest quality, most widely used, realtime data and analysis source on political violence and protest in the developing world. Practitioners, researchers and governments depend on ACLED for the latest reliable information on current conflict and disorder patterns.
21 April 2016
Share
TweetShare on Twitter Share on FacebookShare on Facebook Share on LinkedInShare on LinkedIn