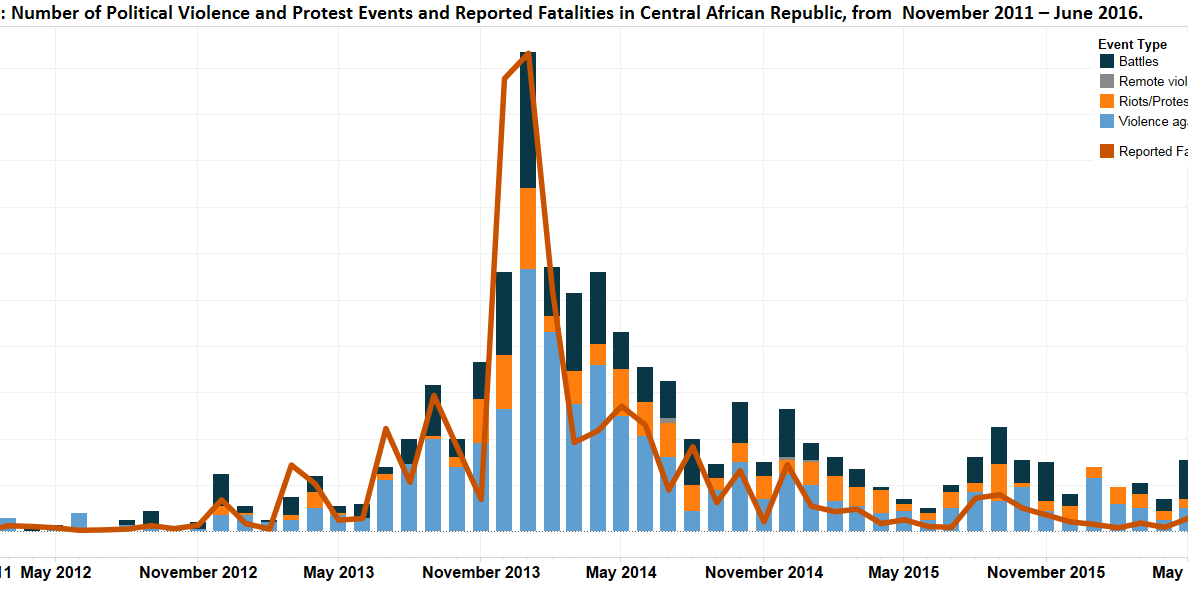 Reported fatalities in the Central African Republic (CAR) have continued to fall since May 2014 to levels not seen since before the outbreak of widespread violence between Seleka and Anti-Balaka groups in late 2013-early 2014. By December 2015 the number of events recorded had fallen to a third and the number of fatalities to a quarter of those reported by ACLED in September 2015, and have continued to stay low for most of 2016 (see Figure 1). This period of lower violence has coincided with CAR’s elections which appear to have brought a degree of stability to the country, although parts of its territory still remain largely outside the control of the central government (The Economist, 8 January 2016).

Since May 2016, localised communal violence in the north has been on the rise (see Figure 1) and threatens to upset this renewed stability. Although the spike in violence between August and September 2015 was largely catalysed by sectarian tensions (see Figure 1), to a lesser degree it was also the result of conflict in the country’s periphery between herders and the settled populations. Starting in May 2016, the potential for renewed sectarian violence has taken a backseat to communal conflicts as the movement of nomadic herders in the northwest has sparked tensions. In May 2016 for example, over 90% of the fatalities recorded by ACLED occurred in events involving armed herders, whilst a similarly high share of fatalities in June (74%) were related to conflicts between herders and various local armed groups. These notably include violence in the Ngaoundaye area in mid-June following a refusal by residents of the area to allow herders to cross their land (Daily Mail, 17 June 2016) and most recently reports of large numbers of casualties and burnt villages in the Niem-Yelewa area involving “cattle rustlers” (Radio Ndeke Luka, 2 July 2016).

On the one hand, these attacks are a sign that the government of CAR needs to play a more active role in securing its territory by empowering its police and armed forces. This is demonstrated by MINUSCA’s role in resolving these clashes, for example by intervening in unrest between former Seleka militiamen and Fulani herdsmen in the Batangafo area, which resulted in 16 deaths over two days (France24, 21 June 2016). A major obstacle remains that the armed forces of the Central African Republic (FACA) have been largely disarmed, and an arms embargo remains in place on the country, leavings its military impotent (RJDH-Centrafrique, 2 July 2016). On the other hand, while the on-going contention is indicative of larger problems facing CAR and the weakness of the central government, the current violence in the north appears to be localized. The question that remains to be answered is whether the government, even with international support in the form of MINUSCA, can effectively secure the country, especially as France’s Sangaris mission prepares to leave in December 2016 (France24, 30 March 2016).