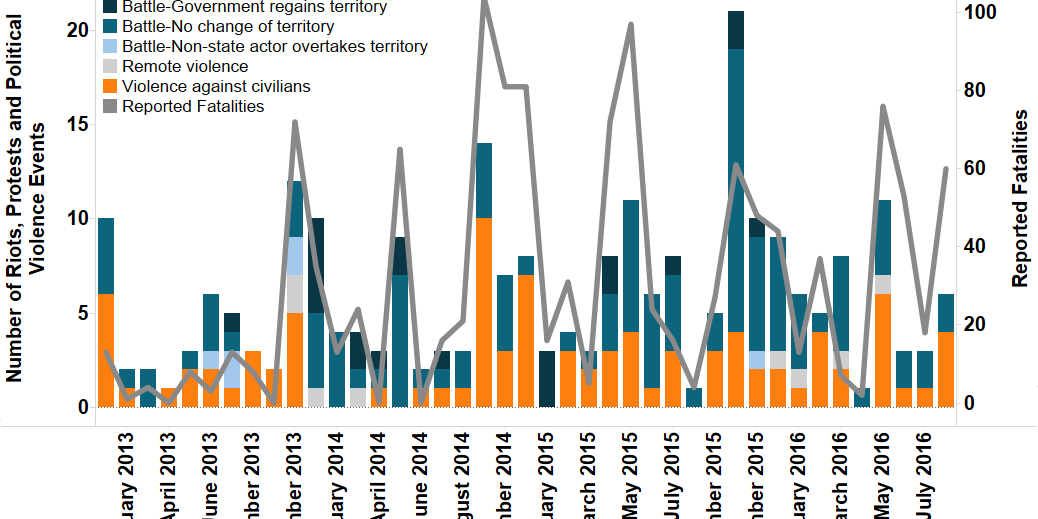 On 14 August 2016 an attack by suspected ADF-NALU   rebels in the Democratic Republic of Congo’s (DRC) North Kivu province killed between 45-51 people (Xinhua, 14 August 2016; Telesur, 16 August 2016), with some official estimates putting the fatality count as high as 75-101 (Al Jazeera, 14 August 2016; United Methodist News, 17 August 2016). The attack targeted the Rwangoma suburb of Beni – the capital of Beni territory – whose towns and villages have been the target of frequent attacks on civilians by suspected ADF-NALU forces since late 2013 (see Figure 1). This attack reinforces two general insights from counter-insurgency operations: that soft targets remain vulnerable even when considerable military pressure is being put on a group (especially in areas of difficult terrain like that of the Eastern DRC) and that often this is the time when these groups are most  dangerous to civilian populations (AFP, 5 January 2016). 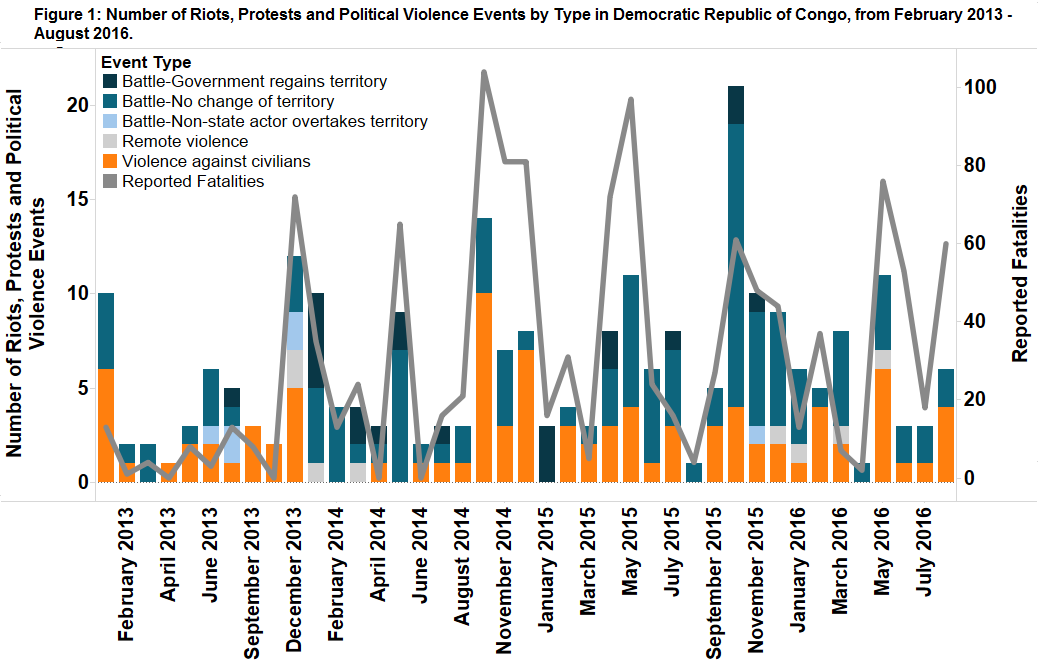 The Rwangoma attack is particularly note-worthy as even conservative fatality estimates would make it one of the deadliest attacks in the ADF-NALU’s history of operations in the DRC, leading to a significant fallout. A 3-day national mourning was announced (Africa News, 15 August 2016), violent demonstrations took place in Beni and Butembo resulting in at least 2 deaths (AFP, 18 August 2016), and suspected ADF-NALU members were lynched (Reuters, 24 August 2016). This demonstrates the     growing frustration of the local population over the inability of security forces in the area to defend them (Al Jazeera, 18 January 2016). This perception is reinforced by the fact that this attack occurred despite ongoing offensives by the Congolese armed forces (FARDC) backed by MONUSCO (Radio Okapi, 23 May 2016).

The attack reveals the cyclical relationship between military operations and violence against civilians.

This is expressed to some extent in the data by the repeated peaks and troughs in violence related to the ADF-NALU and the associated types of violence recorded (see Figure 1). As expected, these spikes in the data are often aligned with government offensives, with May 2014   marking a climax of FARDC’s Operation Sokola I against the ADF-NALU launched after their defeat of the M23  rebellion (Daily Monitor, 10 May 2014), and October 2015 which saw another series of major operations (IBT, 30 October 2015). However, excluding the period from January to July 2014 where significant gains were made against ADF-NALU, each of these spikes contain considerable numbers of civilian fatalities alongside ongoing government operations. Even the most active month in terms of battles between the FARDC and ADF-NALU forces saw an attack in which “dozens” were reportedly killed in the Mamiki area of Beni territory.

Despite the gains made by FARDC and MONUSCO against the ADF-NALU, the battle for the confidence of the population is in jeopardy if the civilian population continues to fall victim to high-fatality attacks by the ADF-NALU. Without this confidence, the ADF-NALU’s ability to destabilize the region in response to FARDC advances will only increase, creating an uncertain foundation for any lasting security for the population.