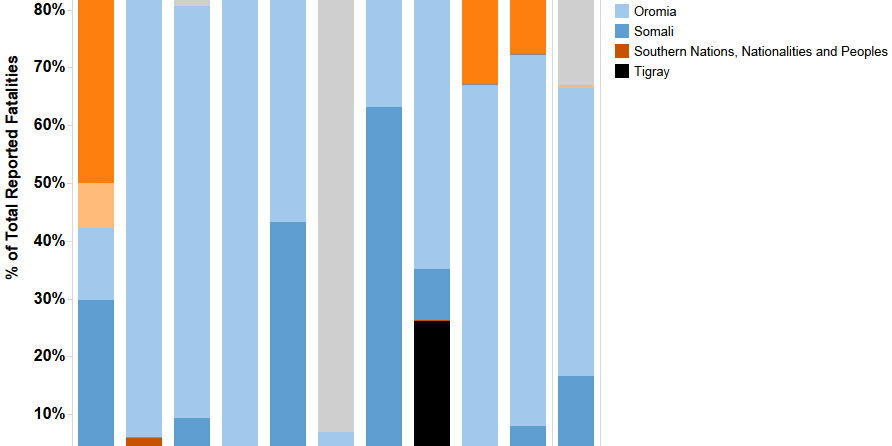 Since November 2015, Ethiopia’s Oromia region has witnessed an unprecedented wave of popular mobilisation. Mass protests swept across Oromia’s main towns and villages, reflecting widespread discontent with a large-scale development strategy promoted by the Ethiopian government (ACLED Crisis Blog, 4 March 2016). Violent state repression in Oromia have killed more than 400 people over the past ten months, while thousands have been arrested in connection to the protests (Human Rights Watch, 15 June 2016). Reports suggest mass protests occurring in the region since 2013. As Figure 1 shows, the unrest in Oromia region has been responsible for nearly half of the reported political violence fatalities recorded for Ethiopia between November 2015 and August 2016. 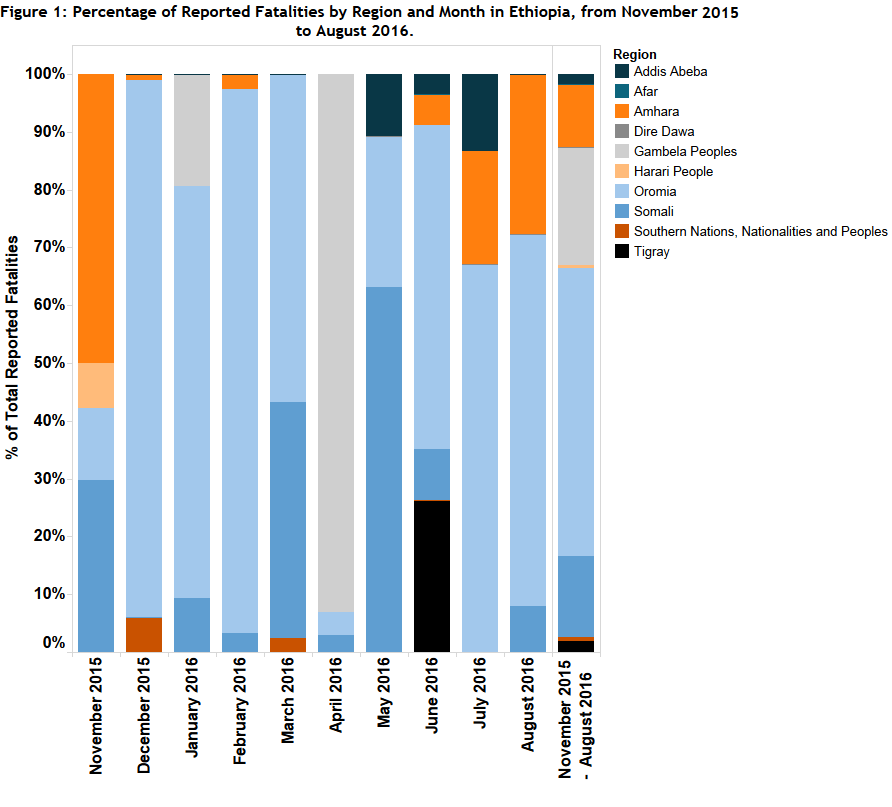 While demonstrations in Oromia continued over the summer, fresh protests rocked the northern Amhara region. This new wave of unrest originated on July 12 when police forces tried to arrest Colonel Demeke Zewdu in the city of Gondar, sparking violent clashes that claimed the lives of at least 16 people (Africa Confidential, 22 July 2016). Colonel Zewdu is a prominent member of the Wolkayt committee, a regionalist movement demanding that the Wolkayt district is incorporated in the Amhara region, replacing the current Tigray administration. Mass demonstrations spread throughout the region during the month of August, involving the capital Bahir Dar and other densely populated areas such as Debre Markos, Dessie and Gojjam (Addis Standard, 1 September 2016; Africa Confidential, 26 August 2016). Around one hundred people have died as Ethiopian security forces opened fire on the protesters in Amhara region (see Figure 2). 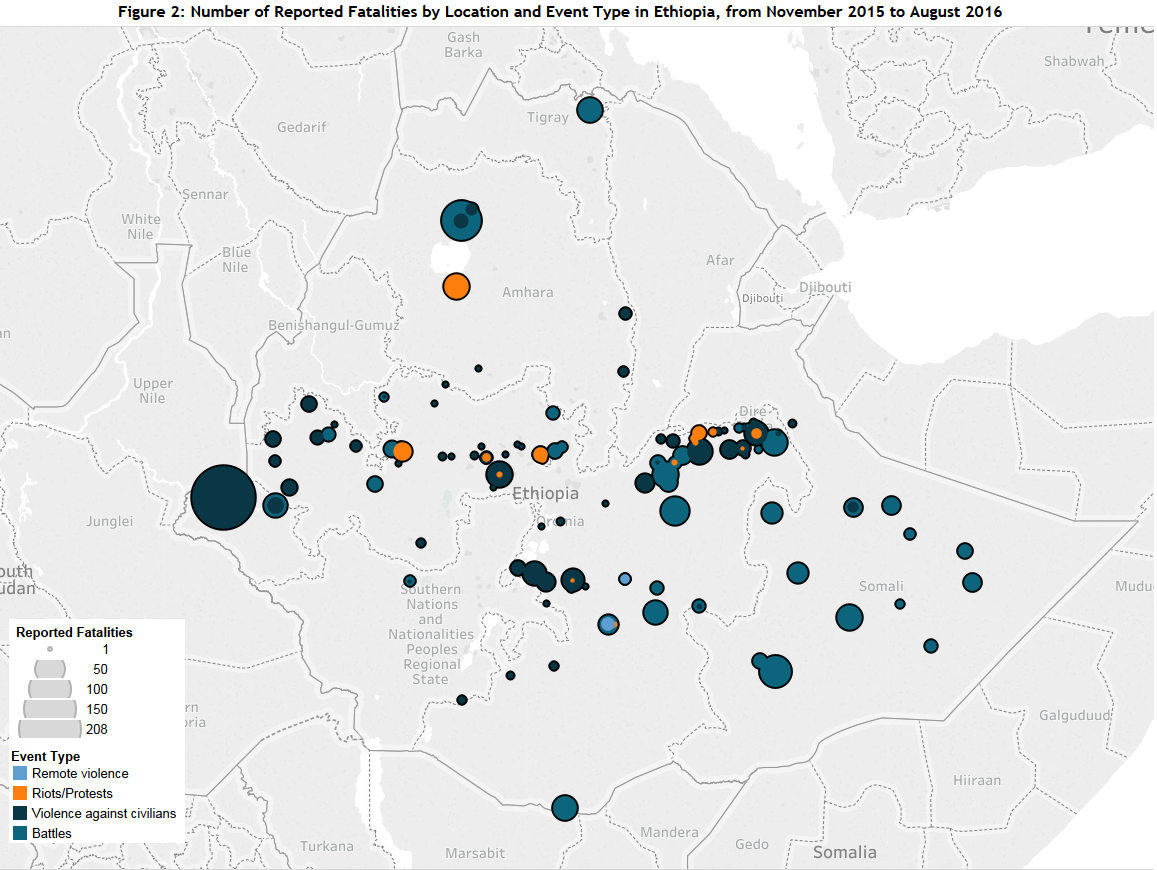 Whilst the demonstrations in Oromia and Amhara reflect the popular frustration with the policies of the ruling Ethiopian Peoples’ Revolutionary Democratic Front (EPRDF), the respective local contexts have shaped the nature of the protest (Jeune Afrique, 22 August 2016). In Oromia, opposition to a government-imposed developmental plan, which would usurp the land of many farmers, revealed the growing discontent over authoritarian rule and widespread corruption among local and national elites. On the other hand, the protests in Amhara pointed to the unresolved Wolkayt issue and to Ethiopia’s perceived unfair ethnic-based federal system, which has reportedly marginalised Amhara people – the country’s second largest ethnic group – to the advantage of Tigray. Additionally, historical tensions and diverging political agendas – the Oromos aspire to greater autonomy for their region, while the Amhara traditionally uphold national unity – have made it difficult for these opposition groups to form a political platform alternative to the EPRDF (Nazret, 1 September 2016; International Business Times, 10 August 2016).

The absence of common political objectives and coordination among opposition groups (Jeune Afrique, 26 August 2016) thus raises questions over how civil unrest could rapidly spread across the country. The answer lies in Ethiopia’s centralised political system, which has left little or no autonomy to the regions and has not created any effective and legitimate mechanism for dispute resolution (Africa Confidential, 26 August 2016). Repression has thus become the only available means for the EPRDF to handle locally grown tensions, quelling unofficial demonstrations and stifling any dissent perceived as existential. Nevertheless, the use of lethal force against peaceful protesters in Oromia bolstered the deep-rooted sense of injustice within the Amhara community, while uncovering the regime’s inability to contain the uprising. As such, the diffusion of protests across Ethiopia exposes the failure of the EPRDF to address local grievances and manage pluralism in a federal political order (Nazret, 6 September 2016; ACLED Crisis Blog, 6 May 2016).

However, as protests in the two restive regions unfolded during the summer, embryonic forms of coordination have started to emerge within the opposition camp. Demonstrators have employed common non-violent tactics, including head shaving in solidarity with jailed opposition leaders (VOA News, 29 August 2016), in the attempt of fending off state repression. Furthermore, two main exiled groups backing the protests, the Oromo Democratic Front (ODF) and Ginbot 7, have recently formed an alliance to coordinate their efforts domestically and abroad (Africa Confidential, 26 August 2016). Although there remain doubts over the prospects of this alliance, the two groups have organised public demonstrations worldwide in order to attract the international attention on the protests in Oromia and Amhara.

Despite growing international concerns for the deteriorating human rights situation (Mail and Guardian, 6 September 2016; Amnesty International 30 August 2016; Reuters, 10 August 2016), the Ethiopian government has dismissed the criticisms, blaming “outside enemies” for being responsible for the current turmoil and vowing to investigate allegations about indiscriminate use of force by the security forces (Al Jazeera, 20 August 2016). After initial concessions aimed at placating the protesters, including the withdrawal of the ‘Master Plan’ in Oromia region last January, Prime Minister Hailemariam Desalegn sent the military and the Federal Police to restore order. However, the security crackdown has failed to stop the uprisings and risks turning a largely peaceful protest movement into an armed insurgency.

Paralysed by internal rifts and a lack of leadership, the ruling EPRDF is unable to find a durable solution to Ethiopia’s current crisis (Jeune Afrique, 22 August 2016; Nazret, 1 September 2016). The authoritarian configuration of its political system make significant liberalisation an unlikely prospect, although the recent unrest revealed the widespread dissatisfaction among large sections of the population with centralised development initiatives and insufficient political reforms. A key security and trading partner of the United States, the European Union and China in the Horn of Africa, the Ethiopian government thus needs to address these crucial political challenges to prevent instability from escalating.