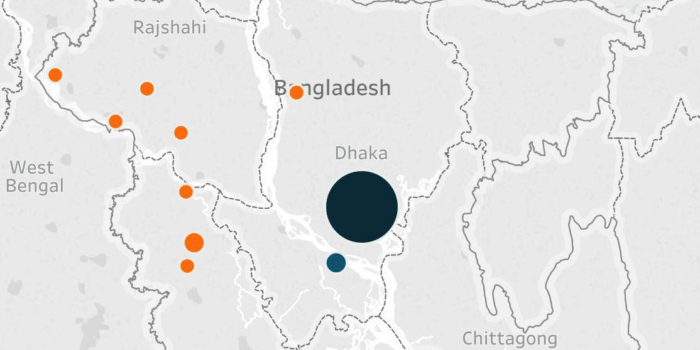 ISIS activity in Southeast Asia escalated during the Dhaka hostage crisis in July. ACLED first recorded ISIS in Bangladesh in September 2015 for the killing of an Italian aid worker. Since then, there have been 17 more events by ISIS, culminating in the July killing of 20 hostages, most of which were foreigners. This event may be the catalyst for the Bangladeshi government to step up its efforts of combating Islamic radicalism in the region.

The Bangladeshi Government denies that ISIS is active in the country, stating that the attackers have been identified as members of both Jama’atul Mujahideen Bangladesh (JMB) and Ansarullah Bangla Team (ABT) (Dhaka Tribune, July 2016). Both of these groups are banned radical Islamic groups in Bangladesh. However, ISIS claimed responsibility for the attack through its affiliated Amaq New Agency, as well as posting videos and photos of both the attackers and hostages. (SITE, July 2016)

Attacks by radical Islamic groups do not make up a large part of the political violence in Bangladesh. ACLED has recorded only 28 such events by radical Islamic groups in Bangladesh in the first 8 months of 2016 out of a total of almost 600 events in that same time period. While Islamic radical groups are not extremely active in the country, ISIS makes up almost half of these events, with 12 recorded in the first 8 months of 2016. Most of the attacks by ISIS were the hacking to death of religious minorities, doctors, or professors. The hostage crisis in Dhaka and subsequent gunfight marked a departure from the norm, and led to the death of 20 hostage, 6 attackers, and 2 police officers.

The Bangladeshi government continues to deny any presence of ISIS in the country. The hacking to death of doctors and professors who have spoken against Islam, and of religious minorities, is the extension of the attacks on the previous ‘Shahbag’ movement. (DW, July 2016; New York Times, December 2015) In 2013, many bloggers, journalists, and writers protested against what they viewed as leniency against the previous regime’s war crimes. Many pro-Islamic groups took this to be an attack on Islam. Many of the bloggers identified by these pro-Islamic groups were hacked to death. Very few attackers have been caught, and even fewer have been prosecuted. Government officials even went as far as to say that bloggers should “control their writing,” in response to the onslaught of attacks on bloggers (CNN, April 2016).

The recent killing of 20 hostages, mostly foreigners, may cause Bangladesh to tighten its security. This attack is unlike the singular hacking to death of mostly Bangladeshi nationals and a few foreigners. This attack threatens foreign investment, foreign aid, and regime positioning in a way that previous attacks have not.