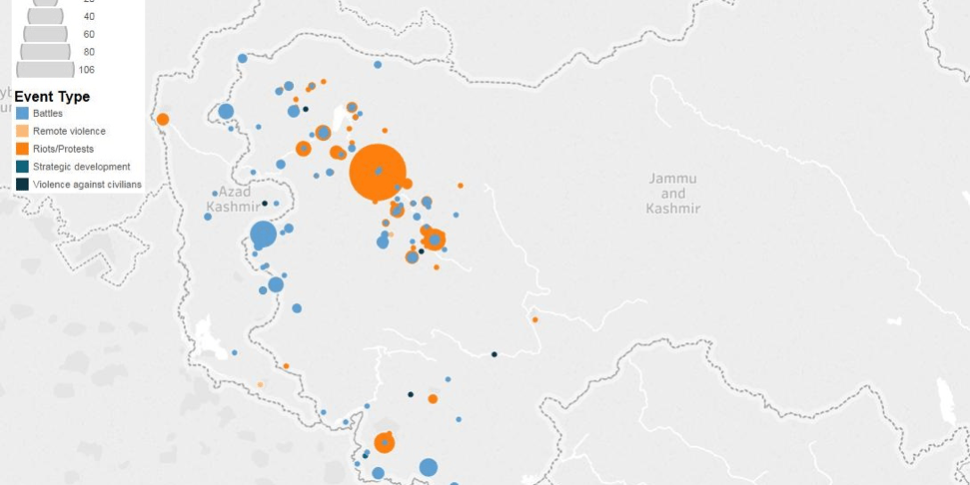 The territory of Jammu and Kashmir (J&K) is a unique context where many attributes of political violence differ in disputed territories. India administers J&K as a state under the federal government, while Pakistan- which refers to its section as Azad Jammu & Kashmir (AJK)- administers it as a self-governing state. The division of the region into Pakistan and Indian administered halves results in very different levels and types of violence depending on the location.

In 2015, ACLED recorded 481 events and 198 fatalities in the J&K region as a whole. Kashmir accounted for 76% (364) of these, while only 20% (97) occurred in Jammu, and only 4% (20) occurred in Pakistan-administered J&K (see Figure 1). The high contrast between the number of events in the Pakistan- and Indian-administered halves of the region speak to many differences, including in political situations, levels of autonomy, and population sizes. Part of the difference is ACLED’s methodology, which depends on local sources: cross-border engagements are more coded on the Indian-administered side of the Line of Control, due to the more active reporting of these events in the sources focusing on the J&K region. 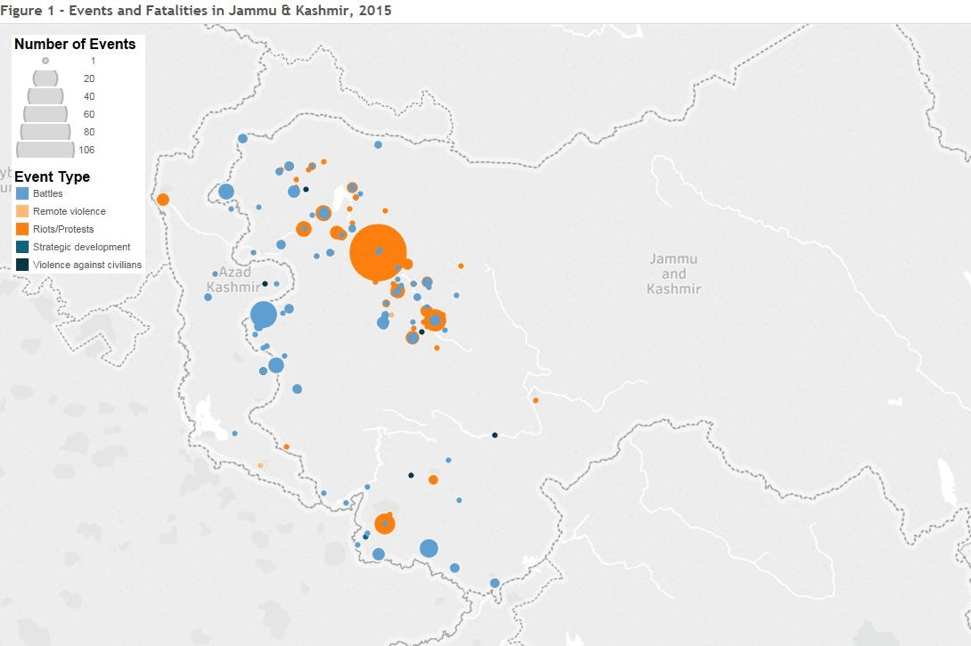 The distribution of events by city helps to further illustrate the diverse nature of violence in this region. The city of Srinagar saw the most events at 112, almost a quarter of the total. Poonch came in second due to incidents of cross-border firing between the Indian and Pakistani militaries in the area. Sopore and Anantnag, the 4th and 5th largest cities in the J&K region respectively, were tied at 20 events each. Jammu, the 2nd largest city in the area, saw only 14 events (see Figure 1).

In 2015, 258 (out of 481 events)  were riots and protests; the majority of these events took place in Indian-administered Kashmir (see Figure 1); 169 battles –primarily between security forces and militants as well as involving cross-border firing between the Indian and Pakistani militaries–were the most prevalent event type in Pakistan-administered J&K (see Figure 1). 8 instances of remote violence, divided roughly evenly between events involving shelling by the Indian and Pakistani militaries, are recorded during this period; finally 9 significant strategic developments occurred, with almost half of these involving unreturned cross-border firing by the Pakistan or Indian militaries.