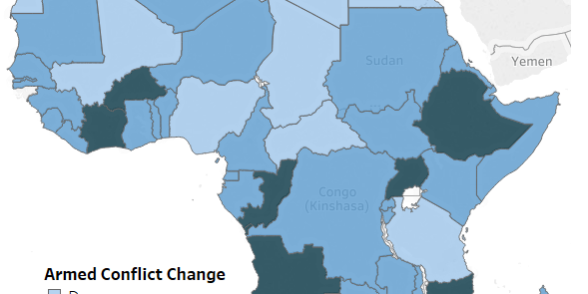 From November 2015, Ethiopia has experienced an unprecedented wave of popular mobilisation. The government responded to the protests with a heavy hand, resulting in thousands of casualties and tens of thousands of people arrested, and charged with terrorism offences. A state of emergency has been extended into July 2017. Further, militant activity has risen in tandem with popular unrest, stemming from both the distraction that civil unrest posed for the Ethiopian military, and also shared grievances. Available data collected from international and local media since November 2015 points to more than 1,200 civilians were reported killed during protests by Ethiopian security forces. Approximately 660 fatalities are due to from state violence against peaceful protesters, 250 fatalities from state engagement against rioters, and more than 380 people killed by security forces following the declaration of the state of emergency in October 2016.  ACLED registered an additional 2,000 people killed over this period from conflicts not – or at least less distinctly – related to the riots and protests (e.g. from battles between government and rebel forces or political/ethnic militias; or from violence against civilians perpetrated by each of these latter actors).

Overall conflict levels have remained relatively high in Libya in the first five months of 2017, though have been decreasing since mid-2015. Violence spiked in March 2017 as the Libya National Army (LNA)  conducted a series of intense air raids against the Brigades for the Defence of Benghazi (BDB) who advanced on the oil terminals in the central Sirte basin. Since April and May 2017, conflict has spread into the southern Libyan regions of Sabha and Al Jufra where the LNA has achieved a number of decisive territorial victories. This represents a significant shift in the territory in which the LNA is operating. Clashes  have pitted the LNA’s 12th brigade against the Misratan Third Force militia in a contest to control the strategic Tamenhint airbase and an attack on Brak al-Shati airbase involving the BDB left 141 dead. This is the first time since March 2015 that the LNA has engaged in sustained fighting outside of the eastern region and signals a change in the balance of power in favour of Gen. Khalifa Haftar who may attempt to mount an advance on the western region and into the capital, Tripoli. The Presidency Council (PC) meanwhile announced the establishment of seven military zones. This effort is likely an attempt to consolidate military support in the western region against the encroaching eastern forces but has the potential to escalate fighting between the east and west as well as between military constellations situated in the west.

Mali has seen a considerable increase in violence since the beginning of 2017, with 103 reported fatalities in January 2017, the country’s highest monthly fatality count since May 2014. This is comparable with the height of the conflict in Northern Mali between January and March 2013. Mali has also witnessed a considerable increase in its numbers of reported conflict events since the beginning of the year, dramatically rising from a low of 7 in December 2016 to 27 in January 2017 and reaching a high of 43 in April 2017. This number of events is similar to the months of January and February 2013 which witnessed the flurry of activity following the French intervention in the northern conflict. The rising violence and fatality counts can both largely be attributed to the increased activity of radical Islamist groups, with events involving JNIM (and its former constituent members), Ansaroul Islam and unidentified Islamist militias accounting for a clear majority of fatalities in 2017. Events involving these groups produced 249 of the reported fatalities recorded by ACLED in 2017, or 66% of the overall total of 376.