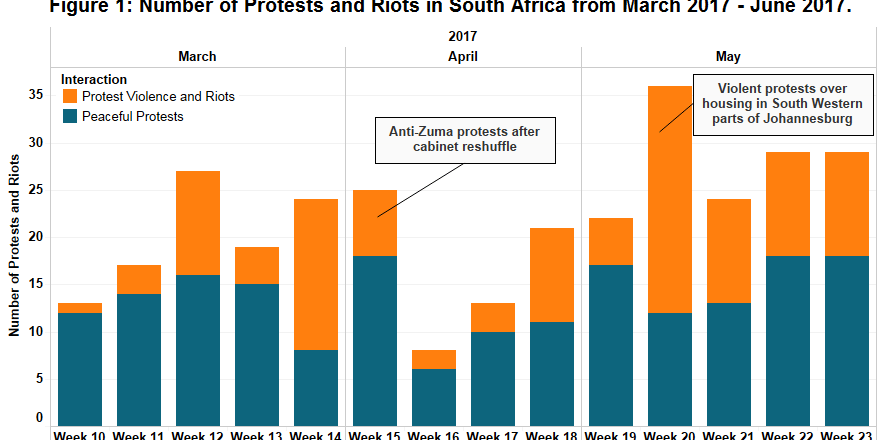 Political violence and protests in South Africa over the first few months of 2017 have steadily increased. May 2017 witnessed an upsurge in conflict events and protests with levels of violence and protests not seen since October 2016. Given the plethora of current political, social and economic malaise in South Africa, the increase in protests is not entirely unexpected. Mass mobilisation against President Zuma’s recent cabinet reshuffle as well as violent protests and riots over poor service delivery have been the primary drivers of increases in conflict.

On 30th March 2017, President Zuma unleashed a political tsunami by controversially replacing 20 Ministers and Deputy Ministers in the cabinet and replacing them with Zuma loyalists (Business Day 30 March 2017; Business Day, 31 March 2017). Within a week of the reshuffle, the #ZumaMustFall campaign had mobilised a myriad of opposition parties and civil societies calling for his immediate resignation. Together with thousands of South Africans, these groups as shown in Figure 1 held a series of peaceful demonstrations in cities and town across the country (Daily Maverick, 7 April 2017). The large turn-out to the protests demonstrate the level of negative public opinion regarding Zuma’s recent performance, sentiments which are supported by recent polling data indicating that the majority of respondents believe Zuma should resign (IPSOS, 20 May 2017). While Zuma again faces a vote of no confidence in Parliament, he is largely expected to win given the historic loyalty of African National Congress (ANC) Members of Parliament (Eyewitness News, 10 November 2016). 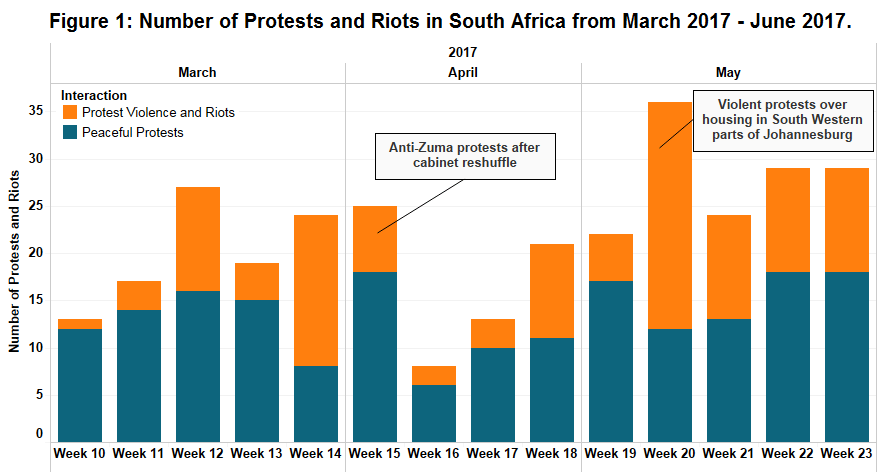 Pressure is also mounting on government over the lack of adequate basic services. The recent spikes in violent service delivery protests, as seen in Figure 1, in early May are indicative of the growing pressure (ISS Africa, 19 May 2017). While violence over the lack of services and development is not uncommon in South Africa, this latest wave of widespread violence serves as yet another reminder of the failings of government to improve the lives of those most in need. In this instance, residents who were furious over the lack and unequal distribution of housing took to the streets in areas of south west Johannesburg. The result was several days of violence, clashes with police, the barricading of roads and the looting of stores, a story which has become all too familiar in post-Apartheid South Africa (ISS Africa, 19 May 2017; Eyewitness News, 11 May 2017). This period of violence counts as the most violent and active of 2017. Moreover,  44% of events in the month of May were recorded as violent riots, compared to an average of 35% between January and April 2017. This suggests violence is becoming increasingly more common and popular when expressing political grievances.