Witchcraft and Vigilante Justice in Africa 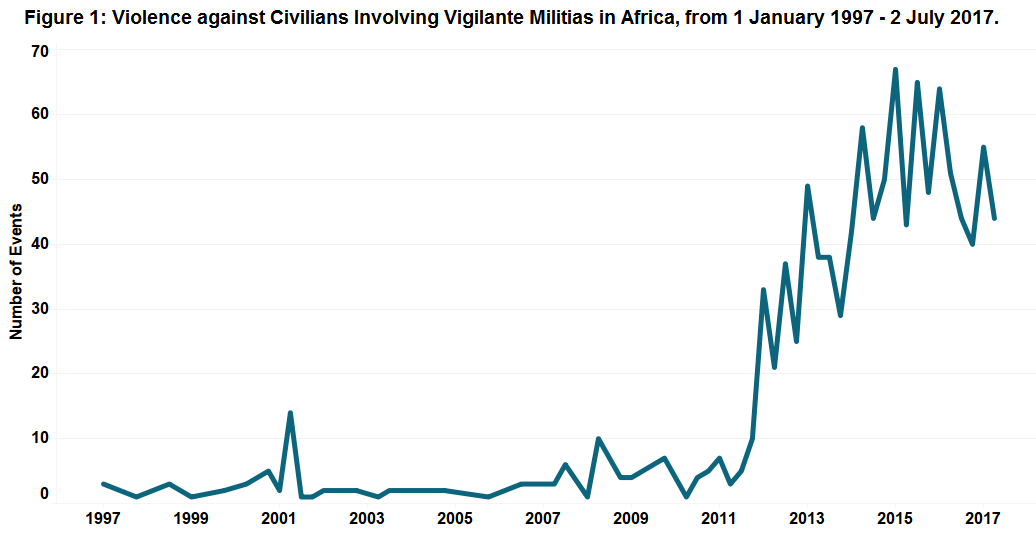 Since 2012, approximately 10% of events involving vigilante militias are associated with witchcraft. Belief in witchcraft is widespread across Africa, where it is “a means of explaining the unequal distribution of good and bad fortune, and the occurrence of otherwise inexplicable misfortune” (The Guardian, 1 March 2012). Vigilante groups often carry out ‘justice’ against alleged witches, even in cases where ‘witchcraft’ is illegal and ‘justice’ can be enforced by state agents, such as in South Africa where witchcraft has long carried a fine and/or ten years imprisonment. Researchers “have estimated the murders of supposed witches [worldwide] as numbering in the thousands each year, while beatings and banishments could run into the millions” (NY Times, 4 July 2014; UN OHCHR, 2009), and these trends have been on the rise in Africa (UN OHCHR, 2009; UNICEF, 2010).

Vigilante violence against ‘witchcraft’ is a widespread phenomenon across Africa (see Figure 2). For example, in Tanzania, albino persecution is common. Individuals with albinism are often targeted for their body parts, which are used in the practice of witchcraft as they are thought to have powers. As a result, there are many gruesome accounts of individuals with albinism being killed and dismembered for their body parts or having limbs chopped off (Newsweek, 13 June 2017; Associated Press, 27 June 2017). Babies, children, men, women, and the elderly are all targeted. In Kenya, “increased child trafficking … has been linked to politicians using witchcraft to win [elections]” (Otieno, 2017). Children with albinism are often targeted as their organs are harvested for “rituals to cleanse politicians so they can defeat their rivals” (Otieno, 2017). These trends are not unique to Tanzania and Kenya. 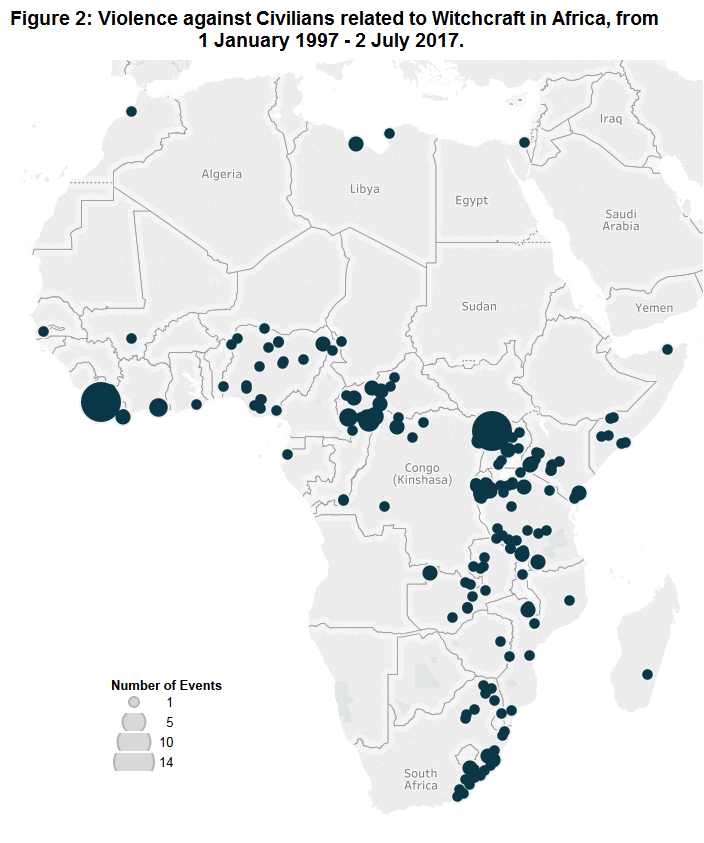 Vigilante militias may also strive to seek ‘justice’ for those persecuted. A number of events are reported in which mobs attack an individual suspected of hurting another as related to witchcraft. For example, last year in Malawi there were reports of vigilante militias lynching or burning to death a number of individuals who were found in possession of bones belonging to people with albinism.

More organized political and conflict actors can use violence surrounding witchcraft to their advantage, such as blaming repression on witchcraft or manipulating populations based on their beliefs. This may contribute to the prevalence of witchcraft-related violence seen in recent years. For example, violence has increased across Burundi since 2015 (see ACLED, 2016).  President Nkurunziza’s announcement that he sought a third term despite constitutional limits was met with a renewed opposition and a failed coup attempt. In the lead up to his re-election and in its aftermath, state forces and the militant youth wing of the current regime in power (the Imbonerakure) have violently repressed opposition. Supporters have been abducted, and reports note that the bodies of many of these individuals are later discovered, with many exhibiting signs of torture. However, despite these reports, the Burundian police force contends there is no increase in violence, and that the bodies being found are not a result of political motives, but rather are occurrences of “common criminality”, such as witchcraft (IWACU Burundi, 27 March 2017).

Another example is the Central African Republic (CAR), where conflict continues since the national instability in late 2012. The predominantly Muslim Séléka Rebel Coalition is countered by the predominantly Christian Anti-Balaka (ACLED, 2015). Civilians have been the victims of atrocities by both sides (see Human Rights Watch, 2017) in what has been dubbed a largely ‘forgotten crisis’ on the international stage. Trends suggest that things may get worse, with Doctors Without Borders (MSF) reporting that “civilians are being attacked at levels not seen in years, especially in the east-central area of the country … Thousands are being forced to flee for their lives and are receiving little to no humanitarian assistance. [MSF teams] have witnessed summary executions and have found mutilated bodies left exposed to terrorize populations” (Doctors Without Borders, 12 April 2017).

Violence involving ‘witchcraft’ has also increased in CAR during this time. The victims of this violence in CAR tend to be women who are persecuted for being ‘witches’. Vigilante groups carry out much of this violence, which may be linked to efforts to combat the rise in hardships people have faced during the context of the conflict. However, organized groups have carried out violence linked to witchcraft as well. The UN reports that “[armed groups] in Central African Republic have kidnapped, burned and buried alive ‘witches’ in public ceremonies, exploiting widely held superstitions to control areas in the war-torn country” (Reuters, 25 November 2015).

Certain conflict contexts can hence give rise to violence involving vigilante militias seeking to carry out ‘justice’ against witchcraft. This may be a result of trying to explain “the occurrence of otherwise inexplicable misfortune” (The Guardian, 1 March 2012), which may stem from large-scale conflict. Conflict actors can use this vigilante violence as a cover for their own repression, or may draw on beliefs surrounding witchcraft to manipulate populations within the conflict setting.

[1] Named vigilante groups, such as the Civilian JTF in Nigeria, are coded by name in the ACLED dataset.