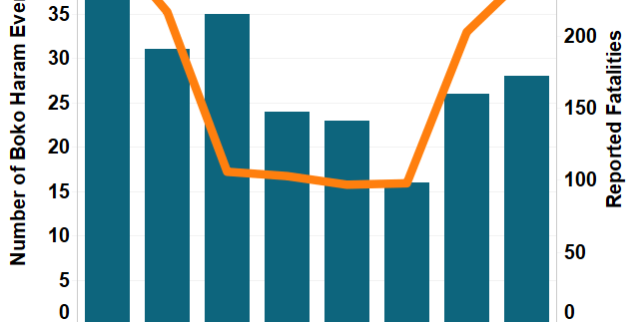 Boko Haram violence in Nigeria has decreased overall since the beginning of 2017 (see Figure 1). This may be attributed to the group’s 2016 organizational collapse in much of the country’s North-East; as a result, recent offensives have been limited guerrilla-style attacks against civilian and military targets.

Following the effective defeat of Boko Haram from Sambisa Forest in December 2016, government forces concentrated efforts on the destruction of remaining strongholds in the nearby Lake Chad region. A notable development following these military gains is the subsequent diaspora of sect’s members throughout the Borno-Adamawa-Yobe corridor, leading desperate fighters marauding towns in search of supplies (Vanguard, 25 August 2017). As a result, some of the civilian population in these areas have been displaced. Other fighters have surrendered to military forces: sixty-eight members of Boko Haram’s Borno fighters surrendered throughout August 2017 (Nigerian Tribune, 24 August 2017). Among those who have surrendered is Auwal Ismaeela, who led the notable 2014 abduction of the ‘Chibok Girls’ (Premium Times, 27 August 2017). The wider military operation in Borno State was fruitful throughout August 2017, reporting 82 Boko Haram deaths, 313 arrests, 630 cleared settlements and 468 rescued hostages (Daily Post, 30 August 2017). Bolstering these efforts, the United States recently agreed to the sale of attack aircraft and other weapons to government forces (Sahara Reporters, 29 August 2017).

Despite Boko Haram’s current incapacity to launch complex attacks or overtake territory, the group continues to carry out suicide attacks against security forces and civilians. 2017 has seen a radical shift to the use of children to carry out these attacks, quadrupling its frequency from 2016 (Reuters, 22 August 2017). At least 223 civilians have been killed in Boko Haram attacks since April 2017 (Premium Times, 5 September 2017). A number of these strikes centred near Maiduguri, targeting checkpoints along the Bama-Maiduguri road. Common targets have been the University of Maiduguri, Muna Garage and Dalori (Vanguard, 20 August 2017). Attacks on the university have included a number of abductions for ransom, a possible indication of the group’s financial straits (Vanguard, 14 August 2017). 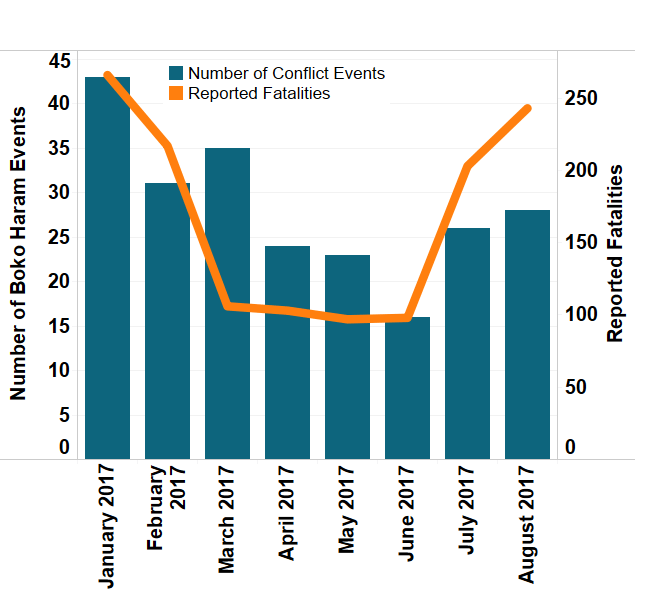 In an effort to adapt to Boko Haram’s diffusion throughout the north-east (see Figure 2), military forces began targeting top commanders for assassination or capture, establishing their whereabouts from integrations of captured members and other intelligence information (Premium Times, 31 August 2017). The government reports the imminent capture of Boko Haram commander Shekau, citing an air attack in the late weeks of August which yielded the death of five of the leader’s top lieutenants (Vanguard, 31 August 2017). Boko Haram’s near-term capacities will likely be determined on financial ability. As current funds are believed to be limited, it is feasible abductions for ransom may become more frequent in coming months. 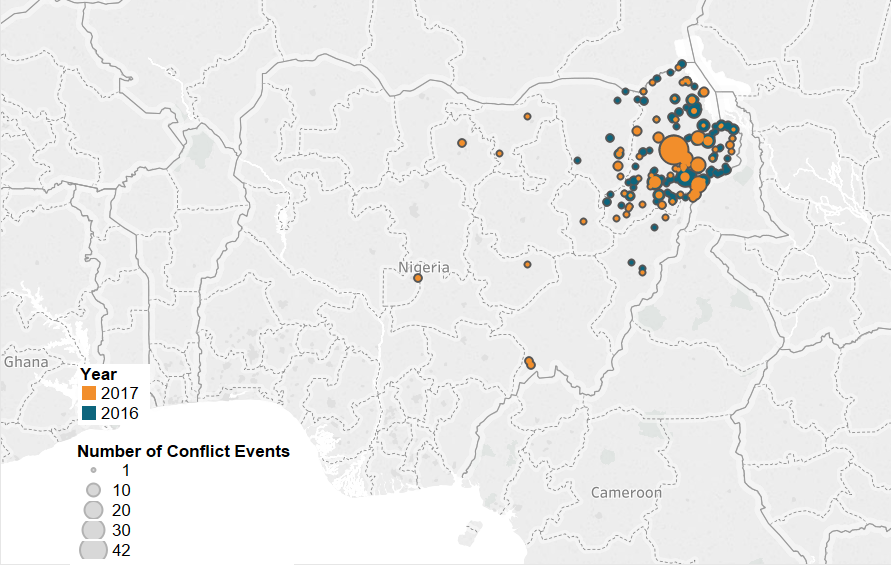 Figure 2: Number of Conflict Events involving Boko Haram by Location in Nigeria, in 2016 and 2017