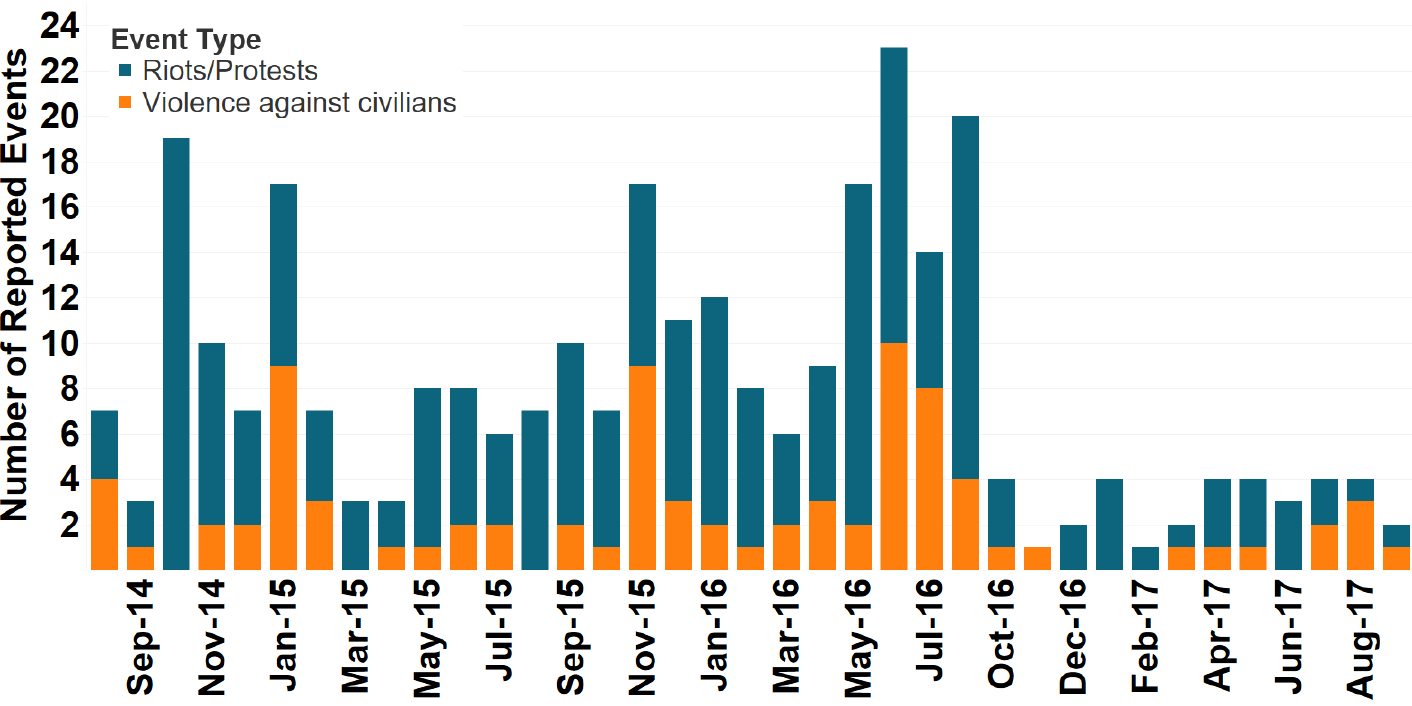 In the period between President Sata’s death in October 2014 and Lungu’s election in August 2016, Zambia saw an increase in political activity. Protest levels rose, as the declining copper prices and stalling economy affected workers across the country, and then became increasingly violent as the election approached (ACLED Trends Report, September 2016). A month before the vote, the Election Commission of Zambia suspended campaigning to limit the clashes between party supporters (Al Jazeera, 10 July 2016). Analysts feared that the close election outcome would generate further political violence (Lusaka Times, 10 August 2016).

This fall in political violence across Zambia is not a result of an increase in political stability, now that Zambia has elected a replacement for Sata, nor has the economy stabilized (Lusaka Times, 28 September 2017). Although there have been relatively few incidents in Zambia in the past year, those incidents have been significant. After UPND leader, Hakainde Hichilema failed to stop for Lungu’s motorcade, he was besieged and teargassed in his house by the police, while his servants were tortured (Daily Maverick, 20 April 2017). Another opposition leader, Saviour Chishimba, was detained for “defaming President Lungu” (Al Jazeera, 14 August 2017). Forty-eight UPND MPs were suspended from parliament for failing to attend President Lungu’s speech (BBC, 13 June 2017). Finally, after a market burned down, Lungu declared a “State of Enhanced Security,” enabling the security forces to prohibit public meetings, close roads, and impose curfews. Opposition supporters claim that the state deliberately burned down the market in order to generate a crisis (Al Jazeera, 14 July 2017). Another change to the violence profile is that, while police only accounted for a small portion (approximately 10%) of the violence against civilians in 2016, they were responsible for over half of all incidents of violence against civilians in 2017. Although Zambia appears more stable numerically than it was a year ago, Lungu is using the power of the state and the power of its laws to create what the government prosecutor of Hichilema accidentally called “The Government of Edgar Lungu.” (Daily Maverick, 20 April 2017).

Figure 1: Number of Riots/Protests and Violence against Civilians Events in Zambia, August 2014 – September 2017