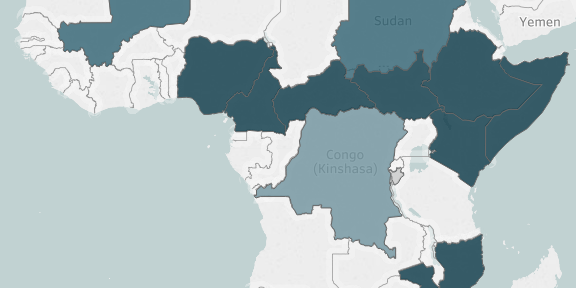 This month saw Burundi fall to the lowest level of events and second lowest reported fatality count since before the presidential elections in 2015. October 2017 also represents the continuation of a shorter term downward trend in fatalities from a 2017 high of 34 in each of June and July to 13 this month. Violence involving members of the ruling CNDD’s youth wing, the Imbonerakure, continues to feature prominently, with their involvement noted in a significant number of events. Although most of the events involving the Imbonerakure are incidents of violence targeting civilians, the number of reported fatalities in these incidents per month has remained low, with only 5 civilians reported killed by Imbonerakure members since August 2017. Rather than the Imbonerakure, the majority of reported fatalities over the last few months have been attributed to unidentified assailants, often using machetes or grenades. Grenade attacks in particular on restaurants and bars continue to be relatively common in Burundi, with the most significant recent attack being reported in July 2017, causing 8 fatalities and wounding at least 40. The majority of these attacks appear to be politically motivated, with members of opposition parties often being targeted. In a number of these cases Imbonerakure involvement is also suggested by the reporting despite not being stated explicitly.

October 2017 saw a continuation of a significant downward trend in events in Tunisia going back to April 2017. That month saw a 2017 high of 124 events, with the majority of these being protests and riots. The only months that saw more events in Tunisia since the start of ACLED’s dataset were January 2016 (at 178) which saw large-scale protests over youth unemployment and January 2011 (at 230) when ongoing streets protests culminated in the ouster of former President Zine El Abidine Ben Ali. The fall in events in October 2017 to just under 50, the majority of which remain protests and riots, can be attributed mainly to a drop in the number of labour-related protests, although concerns over unemployment continue to be a focal point for unrest in Tunisia. Frustration over lack of jobs, especially among youth, has been an ongoing problem in the country for over a decade (as it has been across most of the North African region), and was a primary catalyst for the protests which ousted Ben Ali in 2011. Although labour concerns continued to motivate a plurality of the protests and riots tracked in October 2017, concerns over education, insecurity, and excessive use of force by police were also important catalysts.

Conflict levels in Somalia remain extremely high. The al Shabaab insurgency continues to be the driving force of violence, accounting for 49% of October’s activity. Though this figure is down 4% from September, Mogadishu’s Hodan District saw the deadliest single attack of the county’s history on 14 October, accounting for approximately 400 fatalities. Additional high fatality attacks occurred in the following weeks, most notably in the Xamar Weyne District on 28 October. In both instances al Shabaab targeted hotels in high profile areas of  the city. These attacks may be a tactical watershed for the group; both were likely seen as successful and each achieved heavy notice in western media. Military reaction to the attacks has been considerable. The Federal Government declared new offensives against al Shabaab and the Ethiopian contingent of AMISOM added 1,000 soldiers and 50 vehicles to the force on 1 November. In relatively late breaking development, United States forces carried out a pair of air strikes against Sheikh Abdulkadir Mumin and other Islamic State-linked fighters in the northern town of Buqa on 3 November. This action is notable as it is the first time the United States has targeted Islamic State assets within Somalia.