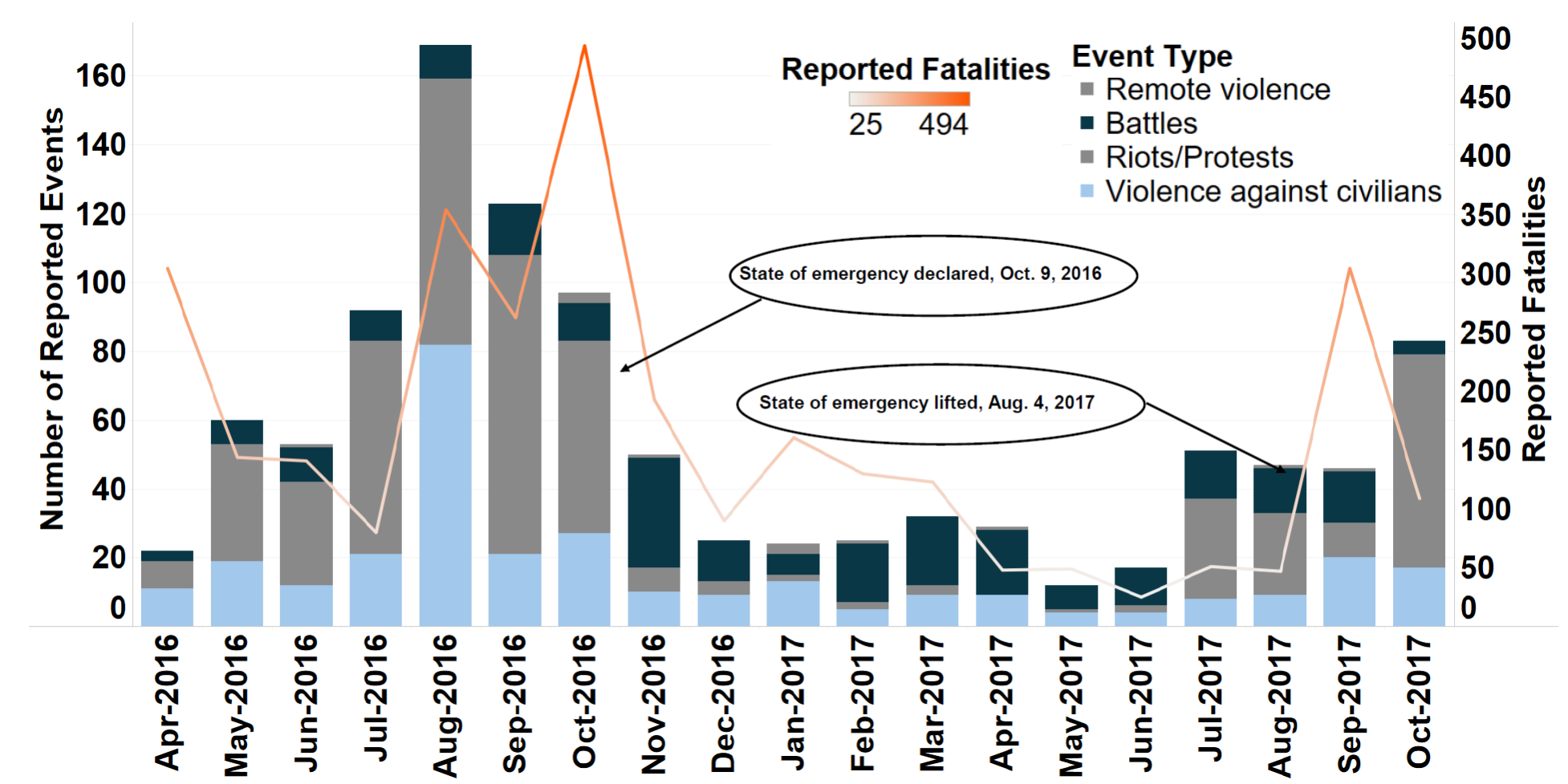 On Friday, 4 August, Ethiopian officials lifted the 10-month long State of Emergency that was declared last year during an unprecedented wave of popular mobilization and anti-government protests. Enhanced government powers during the State of Emergency brought mass detentions, politically motivated criminal charges, and numerous restrictions on people’s movement and communication (HRW, 7 August 2017). Approximately 29,000 people were arrested, 8,000 of whom are currently on trial (Reuters, 4 August 2017). While mass detainment did succeed in bringing perceived normalcy back to the country throughout the State of Emergency, renewed riots and protests reaching levels seen leading up to the declaration of the State of Emergency in October of 2016 illustrate the failure of the Ethiopian government to address protester’s concerns and open up political space for opposing views. Opposition leaders remain in custody, and regime affiliated security forces continue to act with impunity; triggering renewed unrest in the country.

Government sanctioned violence against civilians has been a key factor driving sustained unrest in Ethiopia since the beginning of protests in 2015. While violence against protesters declined during the State of Emergency due to the strict enforcement of a protest ban, clashes along the remote eastern regions of Oromiya region have been increasing in both frequency and lethality.  Beginning early this year, alleged members of a government affiliated paramilitary force known as the Liyu Police have conducted numerous cross border raids into the eastern edge of Oromiya region, sparking ethnic clashes that have killed hundreds.

Clashes between the Oromo and Somali pastoralist communities along the border of the two regions are not uncommon, however the participation of a state sponsored military force has taken the conflict to new levels and raised suspicions from opposition groups. The Oromo community identifies the increased activity by the Liyu police as a way for the government to usurp Oromo lands and further quash dissent(ACLED Conflict Trends Report 60, Ethiopia).

The Liyu police are the Ethiopian Somali Region’s special force created to conduct missions against armed anti-government groups in the restive Somali region. Activity is primarily concentrated within the Somali region, although they have also participated in AMNISOM peacekeeping missions in Somalia (Aiga Forum, 2017). However, Liyu police forces have recently become increasingly involved in a border dispute along the Eastern edge of Oromia region and are accused of perpetuating serious violence deep in the area. In late August, a group of elders from the relatively remote region travelled to the capital to submit a letter to the government requesting assistance in defending their community against cross-border attacks (Addis Standard, 24 August 2017). Despite a peace deal resolving border issues that was signed in April, the Elders described repeated incidents of looting, rape and displacement of villagers by the Liyu police. Data collected from local and international media reported 64 clashes and an estimated 434 battle related fatalities during fighting between Liyu Police forces and Oromo Communal militias in Oromia region since 1 January 2017.

Protests directly or indirectly linked to the violence in East Oromia spread across the rest of the region after the lifting of the State of Emergency. In October, ACLED recorded 60 Protest/Riot events in Oromia region, with demonstrators and rioters demanding the release of political prisoners and a cease of violence perpetrated by the Liyu Police. On 10 October, at least 4 were killed and 20 others injured when security forces used lethal force to disperse protesters in Shashemene (ESAT News, 11 October 2017). On the October 24, rioters in Illulabor burned down 50 houses and killed 12 civilians (Borkena, 22 October, 2017). At least 10 people were killed in Ambo on October 26 after regime forces opened fire on protesters who had blocked roads and torched government vehicles (Africa News, 26 October 2017)

As illustrated by the renewed protests and violence after the lifting of the State of Emergency, the Ethiopian government’s refusal to realistically address protest concerns and allow for political space continues to foster an environment of instability and discontent. Several high profile Oromo leaders remain in custody, and the government seems unwilling or unable to hold its security forces accountable for rights violations. Until it is able to meaningfully and fully address these concerns, violence throughout the country will likely continue to occur.