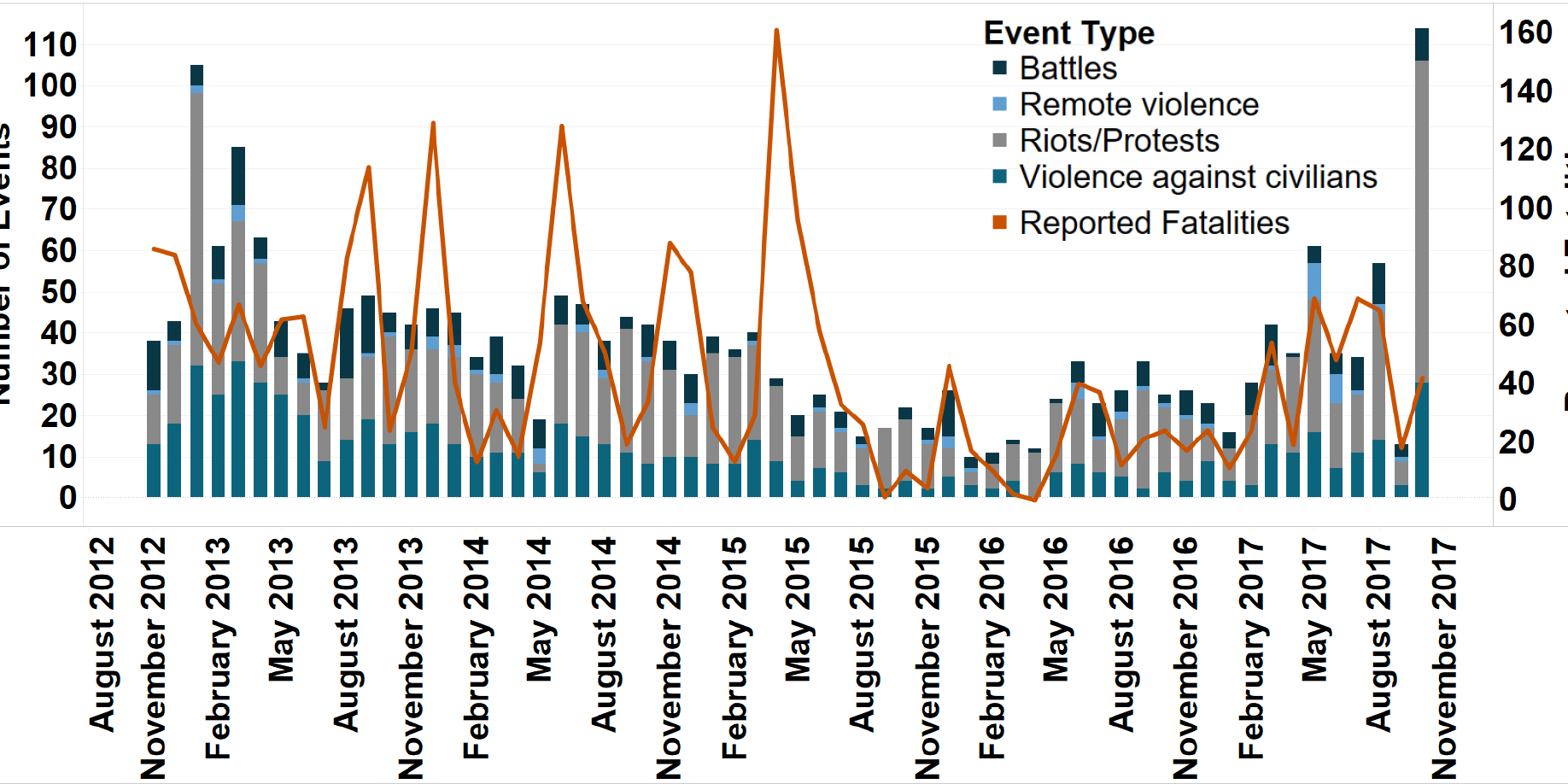 Despite the spectre of the 2007 post-election violence looming over Kenya’s elections this year, the level of events and fatalities have proven to be more comparable to the 2013 elections than those of 2007. Although election-related events in the months preceding the general election in August 2017 drove the numbers of both events and fatalities to highs not seen since 2015 (see Figure 1), it was only with the surprise invalidation of the results of the 2017 presidential election that a notable spike in events was produced, alongside a proportionally smaller one in fatalities.

With incumbent President Uhuru Kenyatta’s victory in the first poll overturned by the Supreme Court due to procedural irregularities, the electoral re-run has not offered a more stable outcome. Despite Kenyatta winning with 98% of the vote, the election was marred by violence which prevented polls from being held in at least four constituencies seen as opposition strongholds. The election also suffered from a low turnout of between only 38-42% (Washington Post, 10 October 2017) which casts doubt on the legitimacy of the results, especially compared to the previous vote which recorded participation of almost 80%. This low turnout can be ascribed in large part to Kenyatta’s main opponent in the election and leader of the opposition coalition National Super Alliance (NASA), Raila Odinga, having pulled out the race in tandem with a call by the opposition to boycott the vote (Quartz Africa, 26 October 2017).

Despite the anger over the situation among the opposition and clashes between protesters and police before and during the election, reported fatalities associated with the elections remained relatively low in October (see Figure 1). But while fatalities may have been low, the electoral re-run was a significant contributor to October 2017 becoming the month with the third most events in Kenya in ACLED’s dataset going back to 1997. The only months which surpass it are December 2007 and January 2008 which saw the worst of 2007’s post-election violence, with more than 1,000 fatalities recorded.

With the 2017 elections complete, the question will now be what Kenyatta’s government will do to deal with the difficult situation facing the country. Odinga has said his coalition does not accept the results of the election (Al Jazeera, 31 October 2017) and that he wants a constitutional review to curb presidential powers. His NASA coalition has also called for a campaign of civil disobedience, dubbed a “national resistance movement”, including a boycott of products and services offered by firms seen as connected to Kenyatta (Reuters, 7 November 2017). The stated goal of the movement is to force new elections by January 2018 (Financial Times, 3 November 2017). Beyond the posturing of the opposition, it is clear the country remains deeply divided by the poll. Although the government and opposition have managed to steer clear of significant violence so far, tensions are likely to continue in the months ahead.