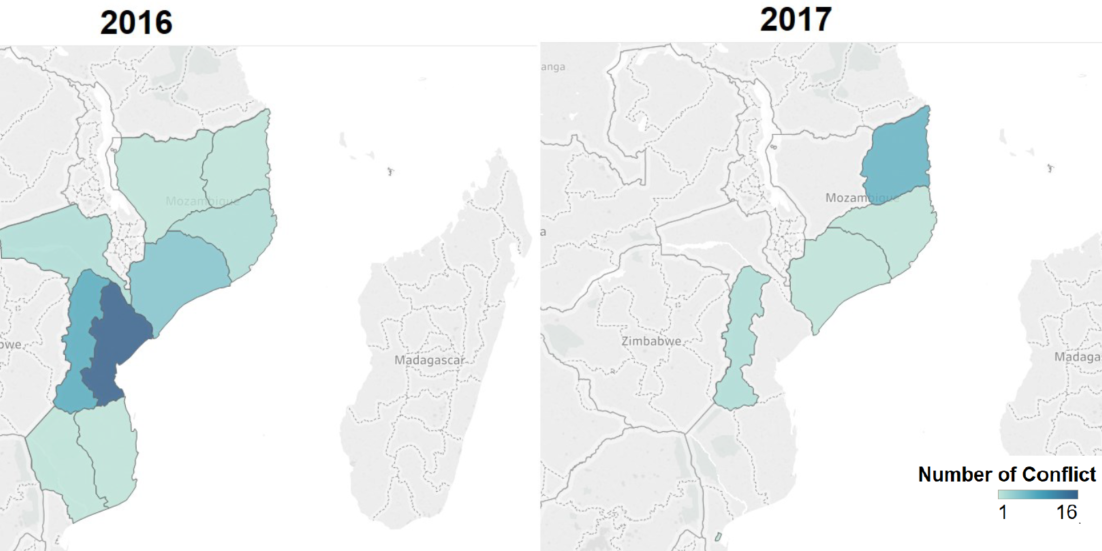 Mozambique witnessed a dramatic increase in political violence in October 2017. The spike in violence stemmed from an apparent Islamist attack in the Cabo Delgado region, located in the far north of the country. An attack by a group calling itself ‘Al Shabaab’ attacked three police stations in the coastal village Mocimboa da Praia resulting in 16 fatalities. The attackers appear to have no connection to the Somalian rebel group but instead appear to be locally embedded in Mocimboa da Praia (Morier-Genoud, 18 October 2017). In a manner reminiscent of other Islamist groups on the continent, the attackers demanded the imposition of Sharia law in the area, the removal of children from secular education and refuse to pay state taxes (ibid.).

There are commonalities between this attack and other ongoing conflicts within Mozambique. The Cabo Delgado region is rich in natural resources and the government has made large investments in developing the capital Pemba to expand the exploitation of offshore gas (Reuters, 21 August 2017).  In spite of this investment, the region remains poor and has not benefitted from the economic boom of the 2000s (Morier-Genoud, 18 October 2017).

This is similar to the low-level conflict between the Mozambican National Resistance (RENAMO), the former rebel movement of the Mozambican Civil War and the current political opposition, and the ruling Mozambique Liberation Front (FRELIMO) partly stems from the government’s policy of resource extraction. RENAMO has demanded a more equitable sharing of the proceeds of natural resources, especially as many of the resources come from RENAMO’s political stronghold in the country’s central belt. As violence in Cabo Delgado has increased, the peace talks between RENAMO and FRELIMO have prevented large-scale clashes between the groups in the Sofala, Zamebia and Manica regions (see Figure 1). President Felipe Nyusi’s overwhelming re-election as FRELIMO president has allowed him to side-line hawkish factions in his party and pursue peace negotiations with RENAMO (News24, 2 October 2017).

Where the violence in Cabo Delgado differs from previous conflicts is in the region’s general support of the government. The province has consistently supported FRELIMO in elections and Nyusi hails from the region (Lodge et al., 2002; Africa Watch, 26 October 2017). While the province may be represented by the president, many Muslims in the region feel disenfranchised by the FRELIMO government. In the post-independence period, FRELIMO attacked Islam as regressive in accordance with the party’s Marxist doctrine and more recent attempts to court the Islamic vote have fractured the party (Morier-Genoud, 18 October 2017). The government has fostered close relationships with national Islamic organisations but they are informed by a hard-line Wahhabi doctrine and are prone to factionalism (ibid.). The Cabo Delgado violence may not be indicative of a long-term trend, but failure by FRELIMO to address economic resentment in the peripheries and to effectively represent the country’s Muslim population could result in future attacks.