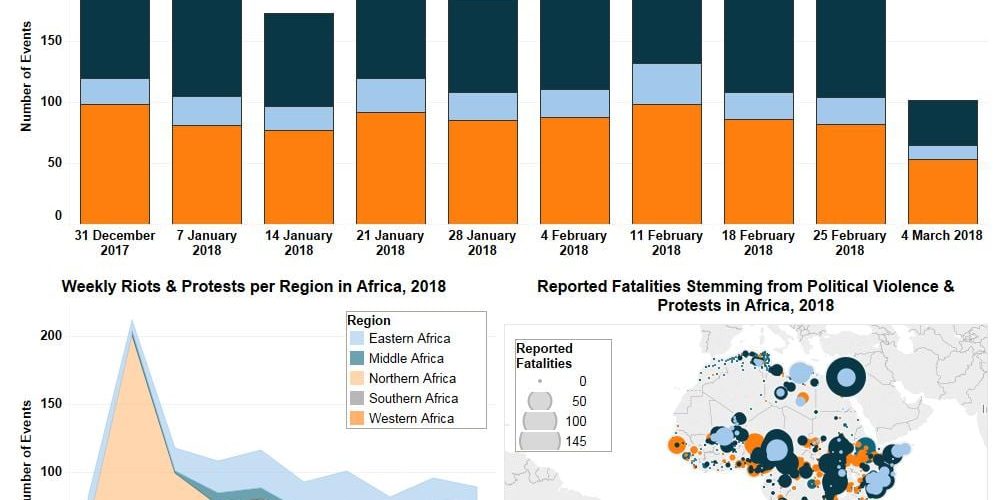 Political violence and protest events in Africa over the week of 4 March were defined by a number of trends: First, battles involving Boko Haram were less pronounced while violence against civilians continued; multiple forms of violence were present in Sudan and South Sudan and the Somali government deployed extra soldiers to fight Al Shabaab as AMISOM forces withdraw from Somalia. Second, state violence against enduring protest movements across the continent continued unabated with a particular focus on political representation.

Boko Haram activity in Nigeria declined in the week of 4 March. The group remains active despite the government’s claims to their defeat, where sustained attacks targeted civilians in Borno State. However, battles in Borno state were much lower compared to last week and no clashes were reported with the Nigerian military forces. One attack was recorded on 6 March where a Boko Haram suicide bomber targeted a Civilian Joint Task Force checkpoint leading to 3 deaths.

In South Sudan, clashes between the two main factions continue, concentrated in Upper Nile. Reports emerged of regular troop build-up and allegations of child recruitment in Western Bahr el Ghazal by the SPLA-IO. In Sudan, SPLM-N Agar declared a ceasefire with other SPLM-N faction led by Al-Hilu last week; this week however, they clashed with state forces in Blue Nile and violence by paramilitary forces continued against villagers in Darfur.

Proportionally, remote violence increased this week in Somalia as Al Shabaab targeted AMISOM, the State Minister for Security and Somali military forces in multiple attacks in Lower Shabelle. This activity coincided with the gradual withdrawal of a number of AMISOM forces from Somalia. The Somali government claims it is ready to tackle the security threat as seen by the military adding 2,500 soldiers into Lower Shabelle.

In contrast to other states, intensifying clashes in Sebha, Libya is a major concern. These clashes involve the Awlad Suleiman and Tebu militias in the south. While eruptions of violence are often driven by local criminal activity, the two groups hold divergent alliances to the Libya National Army (LNA) and the Defense Ministry in Tripoli. This provides an opportunity for national-level actors to promote their own agendas and cause significant destabilisation ahead of UN-mediated elections.

In Sierra Leone, violent confrontations were reported across the country between supporters of the ruling All Peoples Congress (APC) and opposition Sierra Leone Peoples Party (SLPP) in the lead up to and following the presidential election on 7 March. Violence ranged from rioting between rival groups and organised armed attacks by political thugs aligned to the APC.

Similarly, security forces and Liyu police in Ethiopia continued to violently repress protests against the government’s State of Emergency. In an apparent bid to prevent armed groups such as the Oromo Liberation Front (OLF) from capitalising on this unrest, security forces targeted both active protesters and unarmed civilians in a widespread operation across Oromia. As intelligence continues to report on rebel activity and movement in the area, violence is likely to remain high to avoid the levels of escalation observed in August 2016.

In recent weeks there have been fewer reports of Saturday mass-protests by the Imbonerakure in Burundi, however the Imbonerakure continue to actively harass and abuse civilians, particularly around issues of the upcoming constitutional referendum. 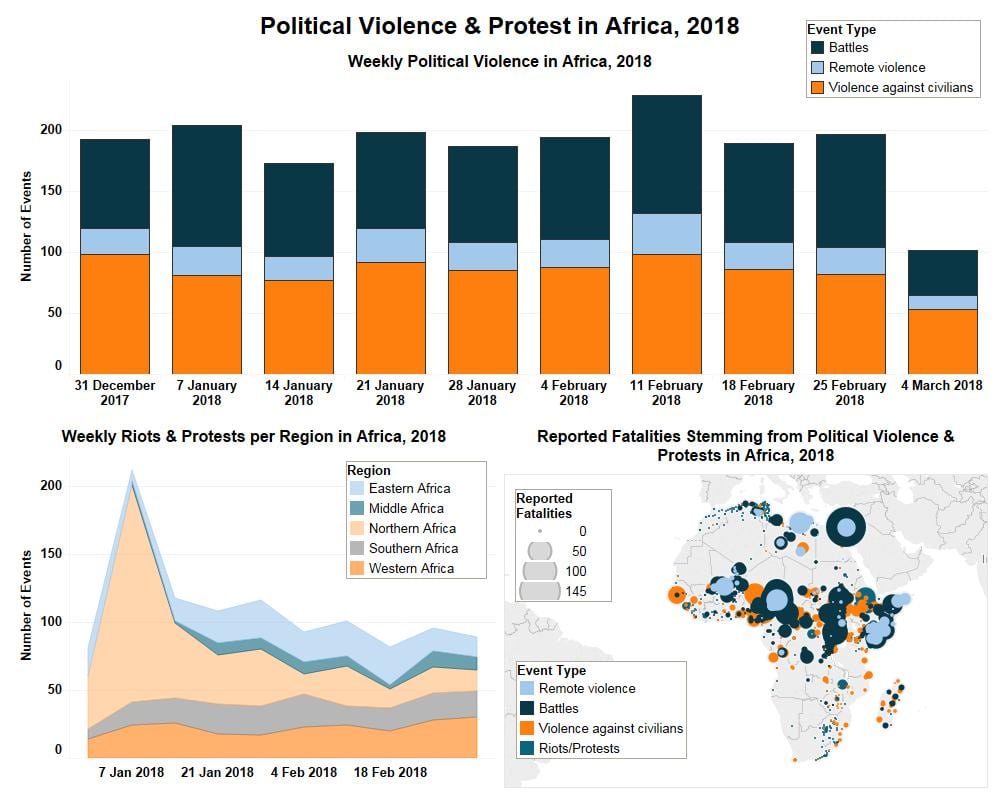