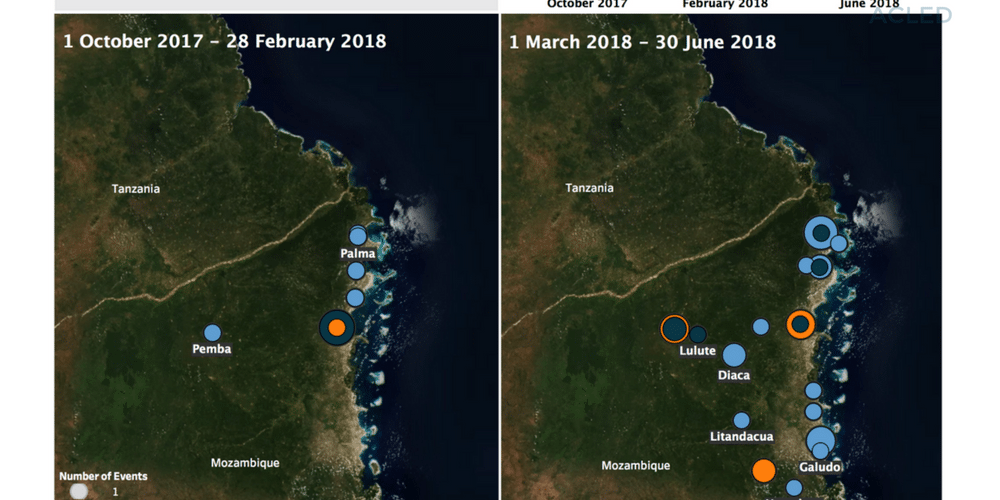 On 5 and 6 October 2017, a group of 30 armed men attacked three police stations in Mocimboa da Praia in Mozambique’s northern Cabo Delgado province. Two police officers and 14 militants were killed. A week later, a police unit was again targeted, this time along the Mocimboa da Praia-Palma route. Over the following months, the organised attacks on state forces increasingly gave way to violence against civilians by uncoordinated militant cells along the coast, from Mocimboa da Praia to the Palma, Nangade and Macomia districts (see Figure 1). The violence has been particularly high since mid-May 2018, with multiple incidents of killing and kidnapping of civilians as well as looting and burning down of entire villages. Nearly 150 reported fatalities have been recorded in both battles and violence against civilians in the province between 1 October 2017 and 30 June 2018 in the ACLED dataset. At least half of these occurred between 15 May and 30 June 2018. There is still a lack of clarity around the reasons driving the violence in Cabo Delgado, yet both the motivations of the militants and the patterns of their attacks seem to distinguish the violence from the RENAMO insurgency that has dominated Mozambique’s political violence landscape over the past decades (see Figure 2). Understanding these motivations and patterns is key to building an informed response to the situation. 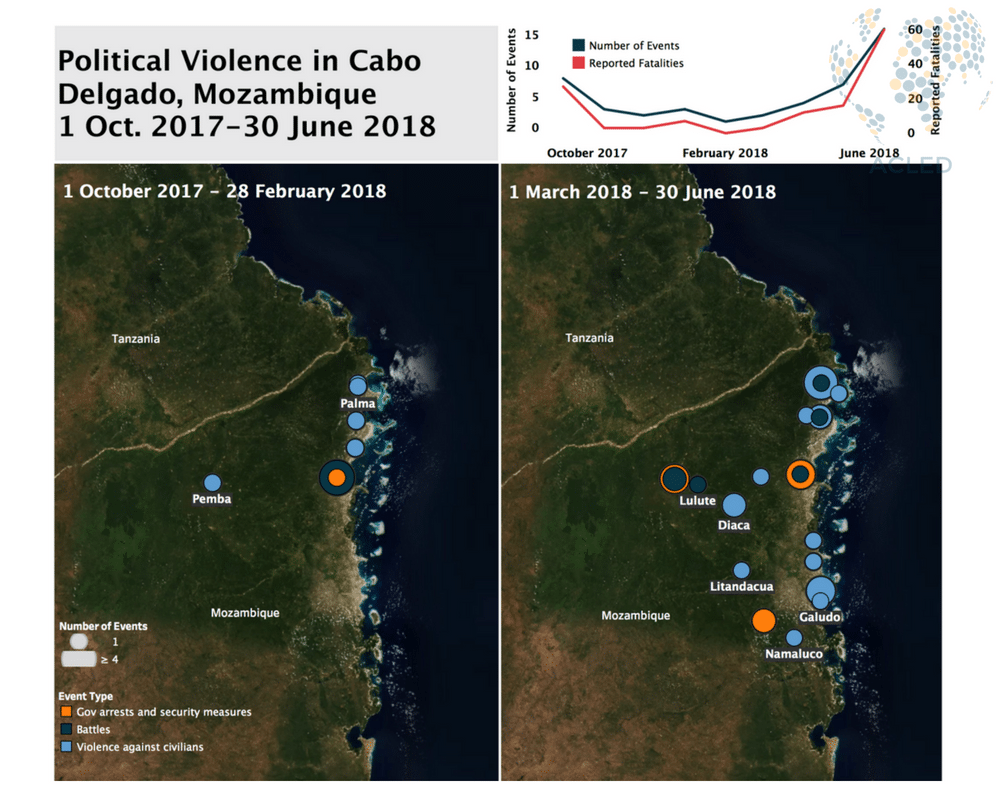 Reports have used a range of terms to describe the actors behind the violence in Cabo Delgado, from “gangs wielding machetes” to “Islamist militants”, “Al-Shabaab”, “Swahili Sunna”, “Ahlu Sunnah Wa-Hamo” or “Al-Sunna wa Jama’a”. The violence seems to be rooted in the radicalization of marginalized youth in Cabo Delgado, mainly from the Mwani tribe. These youth became increasingly influenced by regional jihadist theologians, such as Aboud Rogo around 2012 – they rejected poverty and social exclusion and started to reject traditional forms of Islam in their own province. The youth began to form fundamentalist cells in late 2015, as tensions grew with local authorities and traditional Muslim leaders. The attacks of October 2017 followed the arrest of conservative religious leaders in Mocimboa da Praia for allegedly inciting civil disobedience.
Some note that the cells’ origins, religious practices and increasing targeting of civilians suggest a rising influence of Islamist extremist groups like the Islamic State or Somalia’s Al-Shabaab. However, it is unclear whether an Islamist extremist ideology is currently driving the violence in Cabo Delgado. First, there is a lack of clear leadership and articulated goals inspiring the attacks: none of the attacks have been claimed by extremist groups; no demands have been made to the government; cells appear to be operating in an independent manner, with capacity ranging from 350 to 1,500 attackers; and recruitment drives seem to build on economic rather than religious incentives. Second, the cells’ current “low” mode of operation indicates that outside support for the cells from larger Islamist extremist groups is unlikely as of now. There is limited large-scale fighting with hard targets; most incidents are hit-and-run attacks on state forces. The groups have limited weaponry – most of the militants are armed with machetes and many of the incidents involve the stealing of food, money, weapons, and other property. Finally, the violence might also be linked to the presence of large transnational criminal networks running through the province (around illicit mining, timber extraction and smuggling of people and goods). The cells could be seeking to destabilise the region to facilitate illegal trade routes to the north – in other words, tapping into these criminal networks to make up for their current lack of resources.
The threat posed by these cells is raising increasing concern, not least because the billion-dollar international natural gas exploration projects that have begun in in Cabo Delgado are key to Mozambique’s financial future. The government has vowed a “firm and relentless” response: arresting hundreds of suspects, deploying additional troops to the province and signing security agreements with neighbouring countries. More clarity on the reasons behind the violence seems key for the government to be able to tackle the situation. 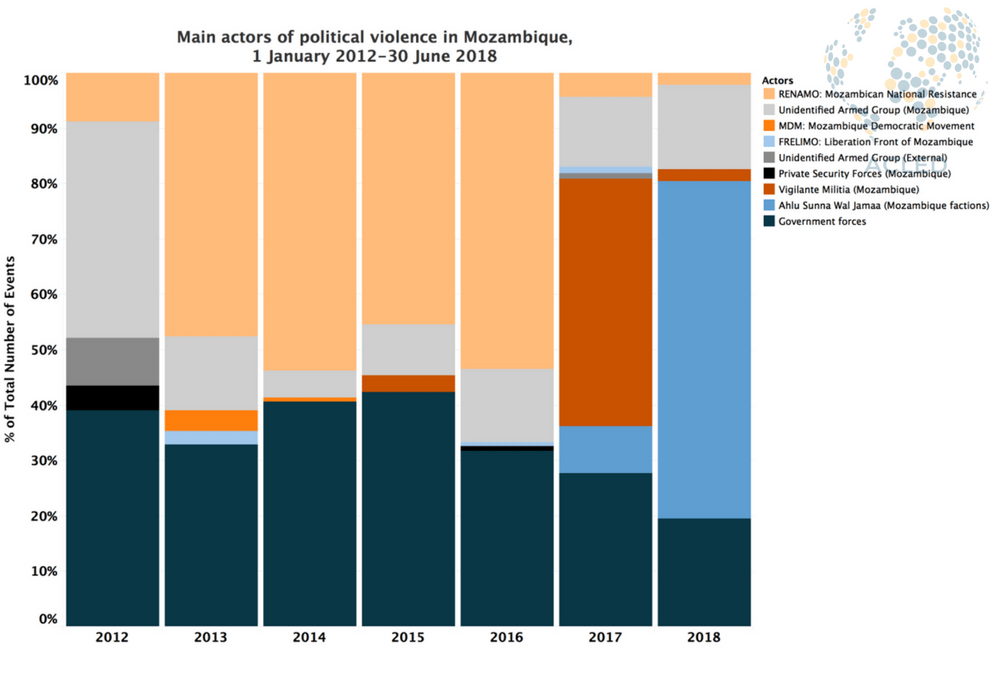 The government’s ability to focus on responding to the situation in Cabo Delgado is limited by tensions running in parallel on the political stage. Although fighting between the decades-old rivals (the government and main opposition RENAMO party) has significantly reduced since the signing of a ceasefire at the end of 2016 (see figure 2), progress has been slow on the key remaining issues – particularly around the demobilisation and reintegration of RENAMO combatants. The discussions were particularly impeded by the death of  RENAMO’s long-time leader, Afonso Dhlakama, in May 2018, leading to the postponement of the October 2018 local elections (presidential elections are planned for 2019). However, on 11 July, the new RENAMO leader, Ossufo Momade, and President Nyusi announced that they have agreed to a disarmament and reintegration process. This will hopefully pave the way for local and presidential elections.