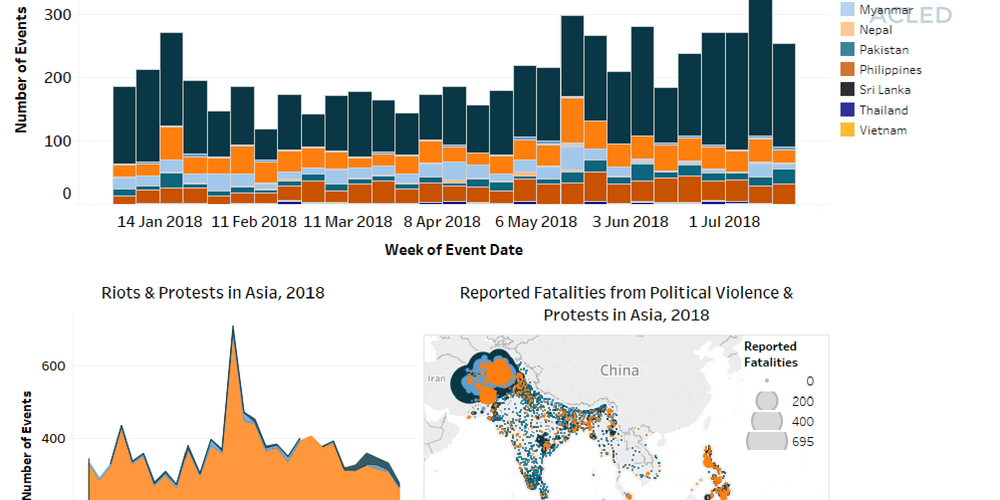 Overall levels of political violence and protest events in South and southeast Asia dropped last week compared to the previous week. Key events in Asia last week included intense fighting between the Taliban and Islamic State (IS) in Afghanistan, ongoing election violence in Pakistan, a sharp spike in drug-related killings in the Philippines, and continuing clashes between state forces and several Ethnic Armed Organisations (EAOs) in Myanmar.
In Afghanistan, while overall levels of political violence decreased by 43%, hundreds of fighters were reportedly killed as a result of clashes between the Taliban and IS. Most of the fighting was concentrated in Darzab and Qush Tepa districts of Jowzjan province, while some also occurred in Sar-e Pol, Kunar, and Kapisa provinces. Meanwhile, people took to the streets in protest over the arrest of Qaisari, a district police chief and aide to Vice President-in-exile Dostum, in Samangan, Kabul, Takhar, Balkh, Jowzjan, and Faryab provinces. Qaisari, along with a couple dozen of his supporters, were detained in Maymana on July 2 after a meeting with army forces turned violent. Up to four of the chief’s bodyguards were reportedly killed after he and his partymen resisted arrest (Khaama Press, 3 July 2018).
Last week in Pakistan was marked by continued political violence and protest in light of the upcoming general elections on July 25. There were several attacks on electoral candidates and election rallies in Balochistan, Khyber Pakhtunkhwa, Punjab and Sindh provinces. Attacks were carried out by both the Pakistan Peoples Party (PPP) and Pakistan Tehreek-i-Insaf (PTI) supporters, in addition to a number of unidentified armed groups. Those targeted included candidates of the Awami National Party (ANP), the Balochistan Awami Party (BAP),  the Pakistan Muslim League-Nawaz (PML-N), the PPP, the PTI, and independent candidates, as well as the rallies of Jamaat-e-Islami (JI) and the PML-N.
In the Philippines, President Rodrigo Duterte held his third State of the Nation Address on July 23. In the week leading up to the address – even though no direct link has been established – there was a sharp increase in the number of drug-related killings mainly in police raids in urban areas especially in Central Visayas and the National Capital Region. Across the country, at least 28 drug suspects were reportedly killed last week. Primarily in the southern portion of the country, the military had several encounters with the Abu Sayyaf and the New People’s Army.
In Myanmar, state forces clashed with the Kachin Independence Army (KIA) in Kachin and Shan state and with the Karen National Liberation Army (KNLA) in Kayin state. Joint Ta’ang National Liberation Army (TNLA) and Shan State Army-North (SSA-N) forces clashed with Shan State Army-South (SSA-S) forces in Namtu township, Shan state, displacing several hundred villagers.
In India, the overall number of political violence events decreased across the country in general as well as in the state of Jammu & Kashmir particularly. However, in Jammu & Kashmir, there have been a number of cases in which security forces targeted civilians in house raids, reportedly leaving occupants injured. The reason for the latest civilian targetings by state forces is not clear but likely related to previous rioting in the area rather than militant activities. In Bastar district of Chhattisgarh, District Reserve Guard and Special Task Force units engaged in a gun battle with Maoists, reportedly killing eight Maoist rebels.
In Bangladesh’s Rajshahi city, unidentified assailants attacked a Bangladesh Nationalist Party (BNP) rally with explosives. Three people, including BNP members, were reportedly injured. In Nepal, people continued to stage protests in support of Dr. Govinda KC. The doctor has been sitting on a hunger strike, demanding changes to a proposed National Medical Education Bill that would allow the opening of more private medical colleges in the Kathmandu Valley. 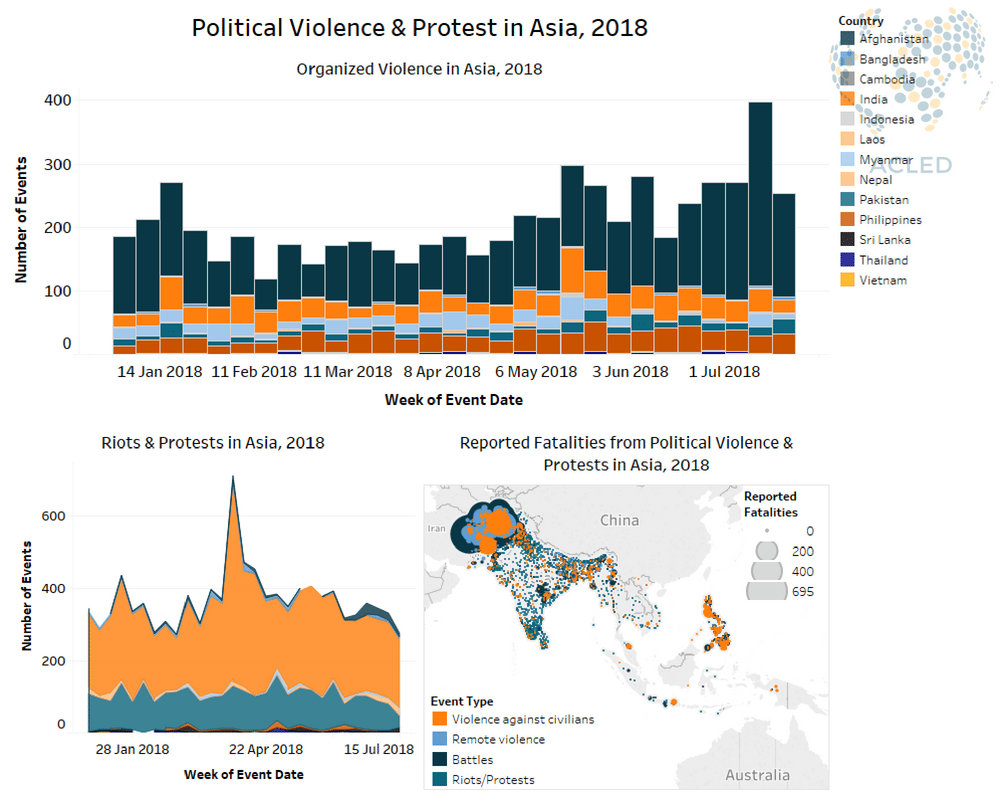