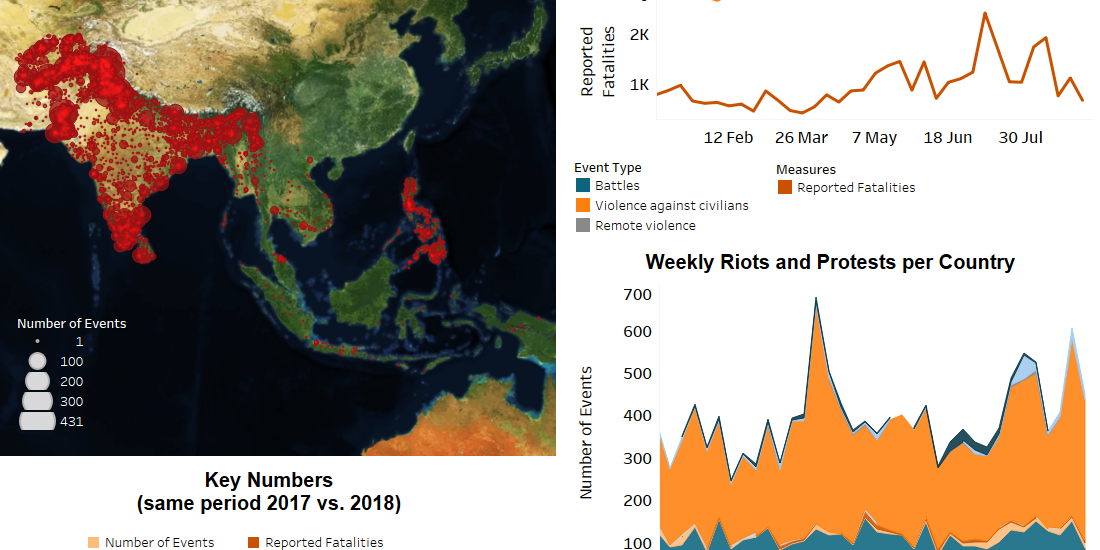 Levels of political violence and protests decreased across South and Southeast Asia last week compared to the previous week. Political violence dropped by over 42%, while the number of riots and protests decreased by 25%.
In Afghanistan, the recent death of Haqqani Network (HN) founder Jalaluddin Haqqani, as reported on 4 September, did not appear to have had any short-term impact on the conflict situation in Afghanistan. Haqqani, who according to reports had been seriously ill for several years, transferred leadership of HN to his son Sirajuddin, who is also deputy leader of the Taliban. It is hence unlikely that his death will cause significant tremors throughout the leadership of either group (Arab News, 9 September, 2018).
In central Afghanistan, Taliban activity increased last week in the Saghar, Shahrak, and Tulak districts of Ghor province, which had remained free from reported clashes throughout the month of August. Clashes between Islamic State (IS) militants and other groups such as the Taliban and Afghan/NATO security forces have dropped in number throughout the country. Despite this, IS continues to conduct high fatality attacks targeting civilians. On 6 September, IS militants conducted back-to-back suicide attacks on a sports gym in the Hazara majority Dashte Barchi neighbourhood of Kabul reportedly leaving 25 people killed and 95 wounded. With the parliamentary election rescheduled for 20 October following fatal opposition by both Taliban and IS last July (for more on this, see this past ACLED piece), it remains to be seen whether violence will once again hinder the electoral process.
Meanwhile, in Pakistan, in another incident of violence against political workers, an Awami National Party (ANP) candidate was shot dead alongside his nephew in Peshawar on 5 September. Fatal cross-border shootings were reported in Azad Jammu and Kashmir along the Indo-Pakistan border, reportedly killing a Pakistani civilian, as well as across the border with Afghanistan. A Pakistani Frontier Corps personnel was reportedly shot dead by firing from Afghanistan’s Khost district.
In India, upper caste community associations called a nation-wide bandh (general strike) on 6 September to protest the recent Scheduled Caste/Scheduled Tribe (Prevention of Atrocities) Amendment Bill 2018. The amendment, approved by Parliament on 9 August, facilitated the registration of criminal cases and arrests of persons accused of atrocities against members of scheduled castes or tribes. It also ruled out anticipatory bail in such cases (Times of India, 8 September, 2019).
While a few encounters between state forces and militants were reported from Jammu & Kashmir, protests by teachers and other labour groups demanding the improvement of labour benefits dominated last week’s political developments in the state.
Similarly in Nepal, labour groups took to the streets demanding the improvement of government policies, facilities, and services. Meanwhile in Sri Lanka, the Joint Opposition organised the “Jana Balaya” protest calling for the government to step down and announce early elections (Al Jazeera, 6 September, 2018). In Bangladesh, journalists staged protest demonstrations demanding the release of fellow journalist Shaildul Islam, who was arrested while covering the student road safety protests in early August, as well as the arrest of the murderer of a journalist.
In Myanmar, journalists and activists took to the street in major towns to protest the sentencing of two Reuters reporters to seven years imprisonment for their reporting on the killing of ten Rohingya men by the Myanmar military in Rakhine state in 2017 (Reuters, September 3, 2018). Similar protests were also reported in Bangladesh and Indonesia. Further, last week, the International Criminal Court ruled that it had jurisdiction over the crime of deportation which occurred in 2017 during the Myanmar military crackdown on the Rohingya population, a decision the Myanmar government rejected (Radio Free Asia, September 7, 2018).
Fighting continued in Namtu township in Shan state between the joint forces of the Ta’ang National Liberation Army (TNLA) and the Shan State Army-North (SSA-N), both members of the Federal Political Negotiation and Consultative Committee (FPNCC), and the Shan State Army-South (SSA-S). There was also fighting between the Karen National Liberation Army (KNLA) and the Myanmar military.
In Thailand’s southern provinces of Songkhla and Narathiwat, suspected Muslim separatists launched attacks on a civilian-owned furniture shop and a guard post at a local education center, respectively. Two protests concerning climate change took place in front of the UN Headquarters in Bangkok.
In Vietnam, local residents have been staging protests in Pho Thanh commune since 29 July over pollution caused by a waste processing plant. On 2 and 3 September, police cracked down on hundreds of demonstrators who had come out to protest.
In the Philippines, Mayor Mariano Blanco, a drug suspect, was shot and killed in a vigilante-style attack by unidentified assailants at Ronda town, Cebu province. His nephew (Vice-Mayor Jonnah John Ungab) had been shot dead in February 2018. Elsewhere, clashes between state forces and various militant groups continued. Three Maute rebels, two civilians, and a soldier were reportedly killed in an encounter between Maute rebels and state forces in Lanao del Sur province on 6 September. Clashes also occurred between the military and the Bangsamoro Islamic Freedom Fighters (BIFF) and the New People’s Army (NPA).
In Indonesia’s Central Java province, Indonesian Special Forces reportedly shot dead two Jemaah Ansharut Daulah (JAD) militants during a raid on 3 September. The two militants were suspected in the shooting of two traffic officers in West Java on 24 August. Calls for the self-determination of Papua reemerged last week when activists from the United Liberation Movement for West Papua staged a protest in Jayapura city on 4 September. 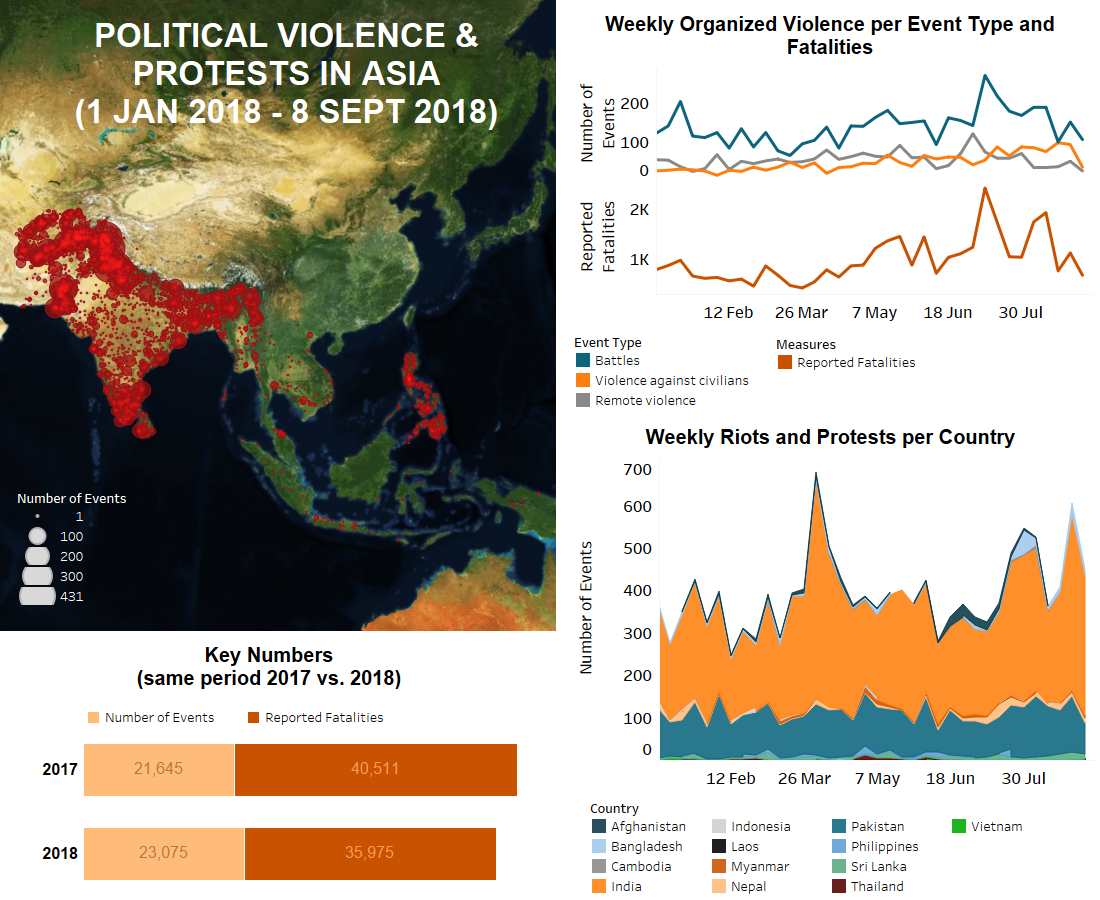 Daniela Pollmann is ACLED's Program Coordinator. Ms Pollmann holds a MA in Conflict, Security and Development from the University of Sussex with focus on peace processes. She has previous work experience in the social sector in Uganda and India where her work focused on women empowerment, child protection and anti-human trafficking. She is currently stationed in New Delhi, India.
Elliott Bynum