Nothing Quiet on the Western Front: A New Battle Starts in Hodeidah as Peace Talks Fail 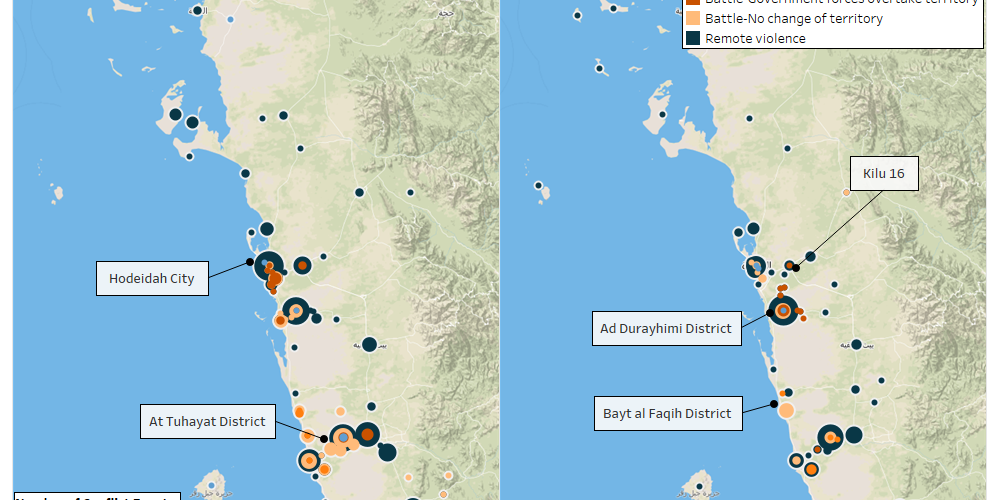 On September 7, coalition-backed anti-Houthi forces resumed military operations outside Hodeidah, in the latest attempt to retake the western port city that the Houthis have been controlling since October 2014. The offensive is reported to have already caused tens of casualties during the weekend, mainly a result of intense air and artillery strikes on Houthi military positions located around the city (Al Jazeera, 9 September 2018). A few days after the Geneva peace talks, convened by the UN Special Envoy for Yemen Martin Griffiths, ended in failure, these latest developments mark a new escalation in the conflict that diminishes the prospects of a negotiated settlement to end the war.
Following the start of the battle of Hodeidah last June, Griffiths, appointed in April by the UN Secretary General, stepped up his efforts to revive the peace process that has stalled since 2016. Consultations with the Houthis and the internationally recognised government were convened in Geneva at the beginning of September, aiming to establish a framework for future formal negotiations between the parties. However, the initiative appeared to have collapsed by September 7, when the Houthis, citing the coalition’s failure to provide safe passage to the delegation and some of their wounded members, declined to join the talks (Reuters, 8 September 2018). On that day, military operations in Hodeidah resumed and several locations in the city were shelled.
Since the beginning of Operation Golden Victory – the codename of the offensive in Yemen’s western coast – Hodeidah has become the most violent frontline in Yemen. Around one third of the total conflict-related fatalities between June and September are recorded in the governorate of Hodeidah, reflecting the utmost importance that the control, or the seizure, of Hodeidah has for both parties. However, while the number of conflict events declined during July and August, conflict deaths – and among them, civilian deaths – continued to increase. In the most grave episode, 55 people were killed as explosions rocked a fish market and the Al-Thawra hospital in Hodeidah. Until now, it is unclear who was responsible for the strikes (Bellingcat, 9 August 2018). Over the past few weeks, the focus of the offensive also gradually shifted from the regional capital and its airport towards the inner districts of the governorate, as the UAE-backed National Resistance Forces moved south of the city to wrest control of Durayhimi and Bayt al Faqih districts from the Houthis (see Figure 1). 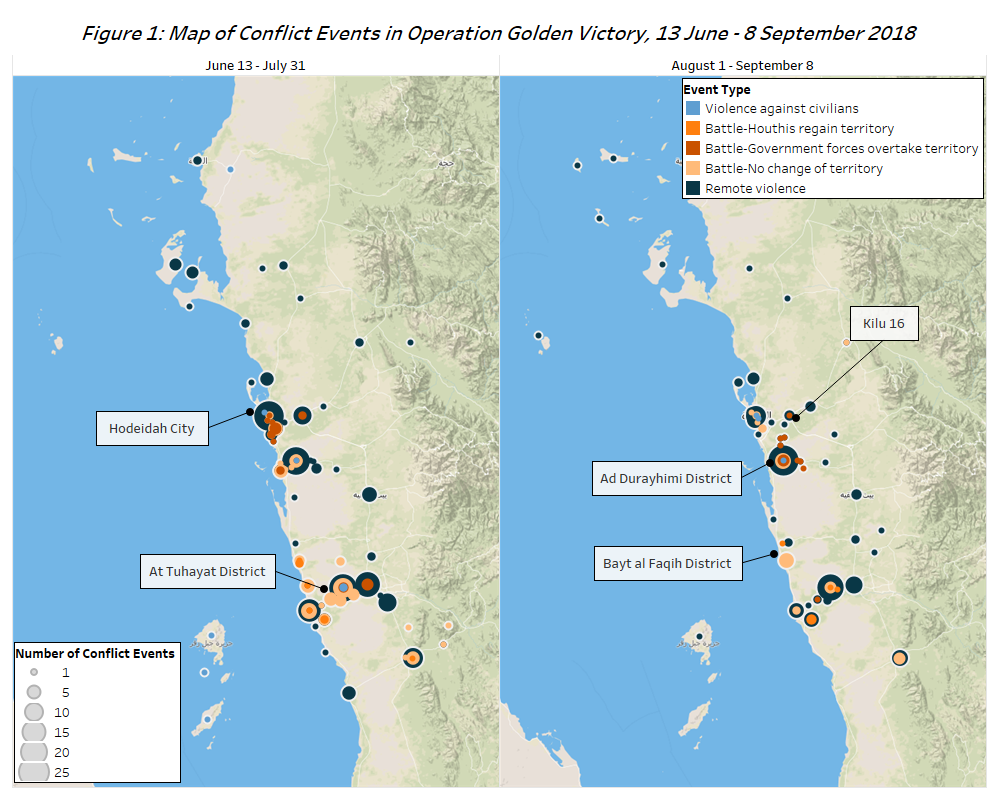 The latest events, however, show that the coalition appears to be redirecting its efforts to seize the eastern areas of Hodeidah, including the strategic Kilu 16 junction that links the port city with Sana’a (Yemen Observer, 10 September 2018). This area constitutes a key supply line for the Houthis, which are under increasing pressure from the coalition in the northwestern provinces of Hajjah and Sa’dah, where Hadi loyalists have recently retaken several districts near the border with Saudi Arabia (Gulf News, 16 August 2018; Yemen Monitor, 31 August 2018). Although the Houthis are unlikely to ultimately withstand the assault, the battle is likely to turn into a highly violent, protracted urban fight, with potentially disastrous humanitarian consequences (Salisbury, 19 June 2018).
Despite the recent territorial advances, the internationally recognised government led by President Hadi struggles to hold the coalition together and to secure popular support. In Ta’izz, clashes between militiamen loyal to UAE-backed Salafist leader Abu al Abbas and soldiers linked to the Al-Islah party and to Vice President Ali Mohsin al Ahmar reveal once again the internal contradictions of the coalition and the divergent strategies of its constituent members (Middle East Eye, 31 August 2018; Al Maqtari, 29 September 2017). Following its exclusion from the Geneva talks, the Southern Transitional Council issued a new statement reaffirming its intention of rejecting any negotiations and criticising the corruption of the Hadi government (STC, 4 September 2018). Additionally, frustration over the depreciation of the riyal and soaring living costs prompted a series of popular demonstrations across southern Yemen, as citizens erected roadblocks and waved anti-government banners in Aden, Hadramawt, Shabwah, Ad Dali, Al Mahrah, Socotra, Lahij and Abyan (Al Bawaba, 6 September 2018). This recent wave of demonstrations constituted the largest protest outbreak recorded by ACLED since late 2016 (see Figure 2). 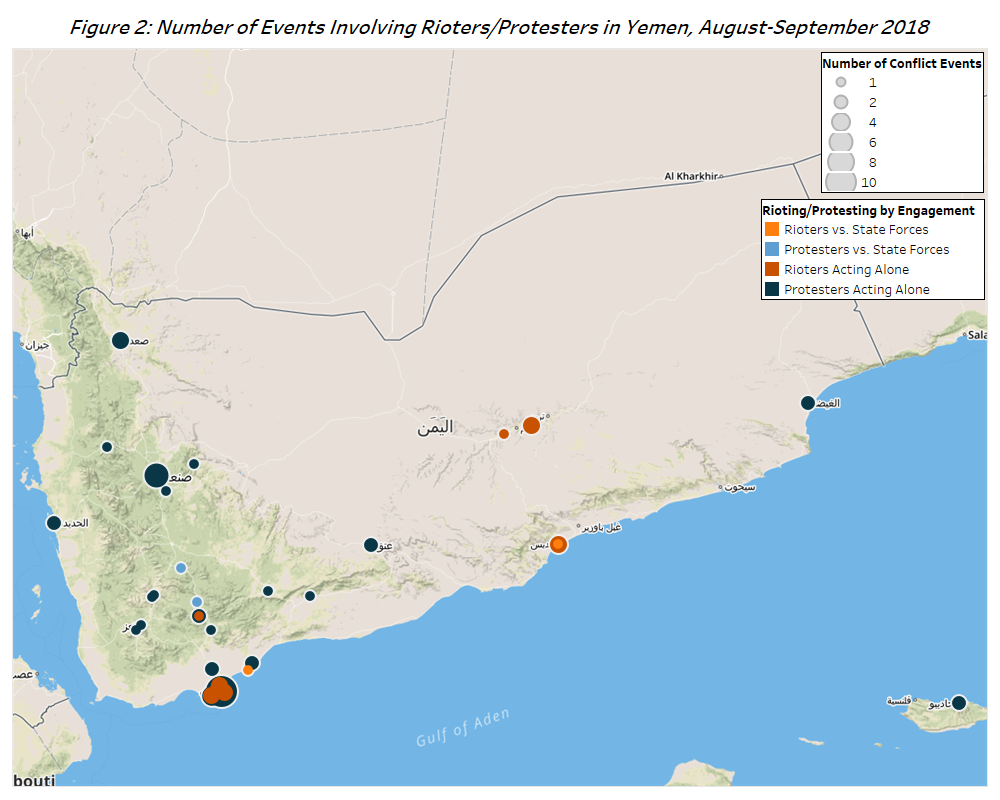 In the aftermath of the failed Geneva talks, the UN Special Envoy renewed his commitment to revive the peace process despite attempts by both parties to derail it. Neither the Houthis nor the Hadi government, however, currently seem to be able to engage in credible negotiations. On the one hand, the Houthis have disrupted the peace process in several occasions since 2015, and have reiterated their intention to defend the last port they control militarily, proving able to resist the initial assault in June. On the other hand, the varied composition of the coalition that nominally supports Hadi, which includes a constellation of local actors who dispute his legitimacy and pursue distinct, if not divergent, agendas calls into question the president’s ability to respect the negotiations’ outcomes. In addition, the coalition’s main foreign backers, Saudi Arabia and the UAE, have thus far done little to contribute to a peaceful resolution of the conflict, privileging a military solution over a negotiated settlement.
Find an explanation of ACLED’s methodology for monitoring the conflict in Yemen here.