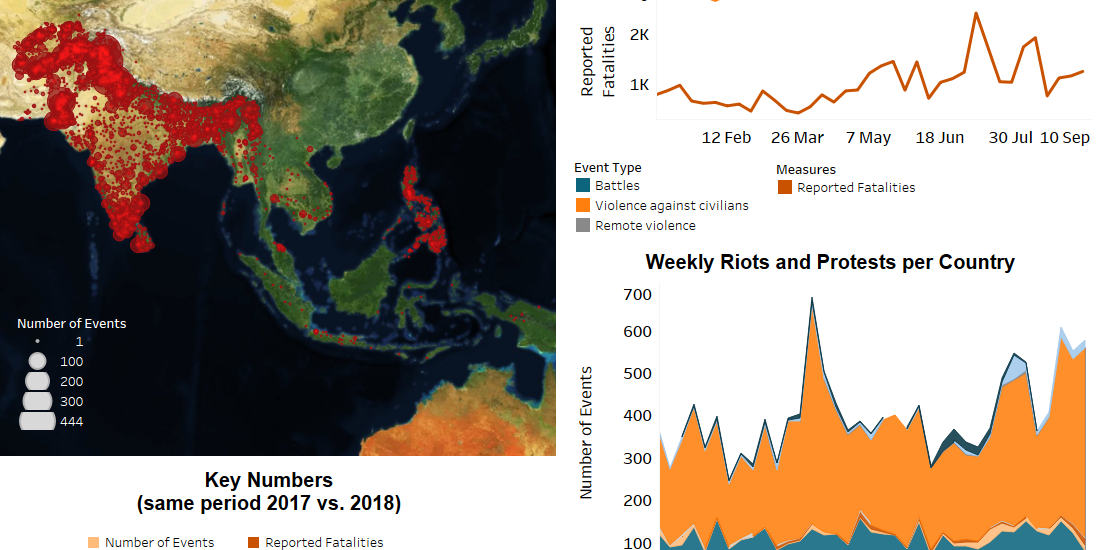 The trend of decreasing political violence in South and Southeast Asia continued, while at the same time the number of reported fatalities slightly increased. The overall number of riots and protest events in South and Southeast Asia also increased last week compared to the previous week.
In Afghanistan, Martyr’s Day was celebrated on 9 September in Kabul where large groups of people gathered in remembrance of Ahmad Shah Massoud – a former Afghan political and military leader who led the resistance against both Soviet and Taliban forces. The celebrations turned violent when several Massoud supporters began firing guns into the air, injuring at least 20 civilians. On the same day, an Islamic State (IS) suicide bomber detonated their motorcycle near a pro-Massoud procession in the city, reportedly killing seven civilians and injuring 25 others. Security forces claimed to have earlier shot dead another man preparing to attack a procession in a similar fashion (RFERL, 10 Sept 2018). Meanwhile, despite this attack, IS activity appears to be slowly decreasing throughout the country. It remains to be seen whether the upcoming parliamentary elections, scheduled for 18 October, will lead to a significant resurgence in the group’s activity.
In Pakistan, militants attacked state forces in remote-controlled explosions and ambushes four times in the provinces of Khyber Pakhtunkhwa and Sindh, reportedly leaving seven soldiers and eight militants dead. Similarly, in India’s state of Jammu & Kashmir, state forces engaged militants in a series of clashes, including five lethal encounters, resulting in the reported deaths of 15 militants and a rioter. Furthermore, Pakistani and Indian forces exchanged fire across the Line of Control (LoC) five times last week, which led to the reported death of a Pakistani civilian.
While the levels of organized violence in India decreased, levels of riots and protests increased significantly. The main reasons for the spike in protests was the nationwide Bharat Bandh (general strike) called jointly by the Indian National Congress and other opposition parties against the central government, and the recent hike in diesel and petrol prices. While in most places the bandh was observed peacefully, occasional incidents of rioting were reported from different states, with the majority taking place in Assam, followed by Karnataka and Tamil Nadu.
In both Bangladesh and Nepal, ongoing protest movements resurged last week. Bangladesh Nationalist Party (BNP) activists took to the streets demanding the release of the party’s chairperson, Khaleda Zia. Zia was sentenced to five years in prison on corruption charges in February 2018 (Al Jazeera, 8 February 2018). The police arrested a number of BNP members in response to the latest protest demonstrations. In Nepal, social activists once more shifted the focus of the political discourse onto the rape and murder of Nirmala Panta, demanding the government expedite the process of its investigation. The number of protest events increased towards the end of the week with various groups attending demonstrations as part of a nationwide call for protest actions on 15 September.
Likewise, several protests were reported in Southeast Asia, particularly in Myanmar, Cambodia, and Indonesia last week. In Myanmar, in five locations in Yangon and twice in Mandalay, the Myanmar War Veterans’ Association held demonstrations to support the Myanmar military and decry the interference of international organizations in Myanmar. These protests appear to be in response to the recent report of the UN Fact-Finding Mission on Myanmar concerning the Myanmar military’s actions in Rakhine, Kachin, and Shan states and Facebook’s decision to ban the accounts of senior military officials. In Rakhine state, there was a protest against the ICRC and Myanmar Red Cross Society concerning the perceived unequal distribution of aid favouring Rohingya communities.
Across Myanmar, at many education colleges, students protested the colleges’ rules regarding course work and distance education. In Tanintharyi region, protesters demonstrated against plans for a dam in the region. In Yangon, workers continued their nearly month-long protest against the Fu Yuen garment factory.
In Cambodia, people took to the streets over the issue of land rights in Sihanoukville and Slor Kram. In Indonesia, taxi drivers protested the government’s ride-sharing policies and the National Guard for the People staged a protest against corruption outside the Democratic Party offices in Menteng.
Drug-related killings in the Philippines continued, as did fighting between state forces and insurgent groups. On 14 September, Abu Sayyaf and the military clashed in Sulu province, reportedly resulting in the death of seven Abu Sayyaf rebels.
In Thailand, a village defence volunteer in Pattani was reportedly shot dead by suspected Muslim separatists on 9 September. Also in Pattani, on 11 September, two rangers were reportedly killed and another four injured after being ambushed by suspected separatist gunmen on motorcycles. 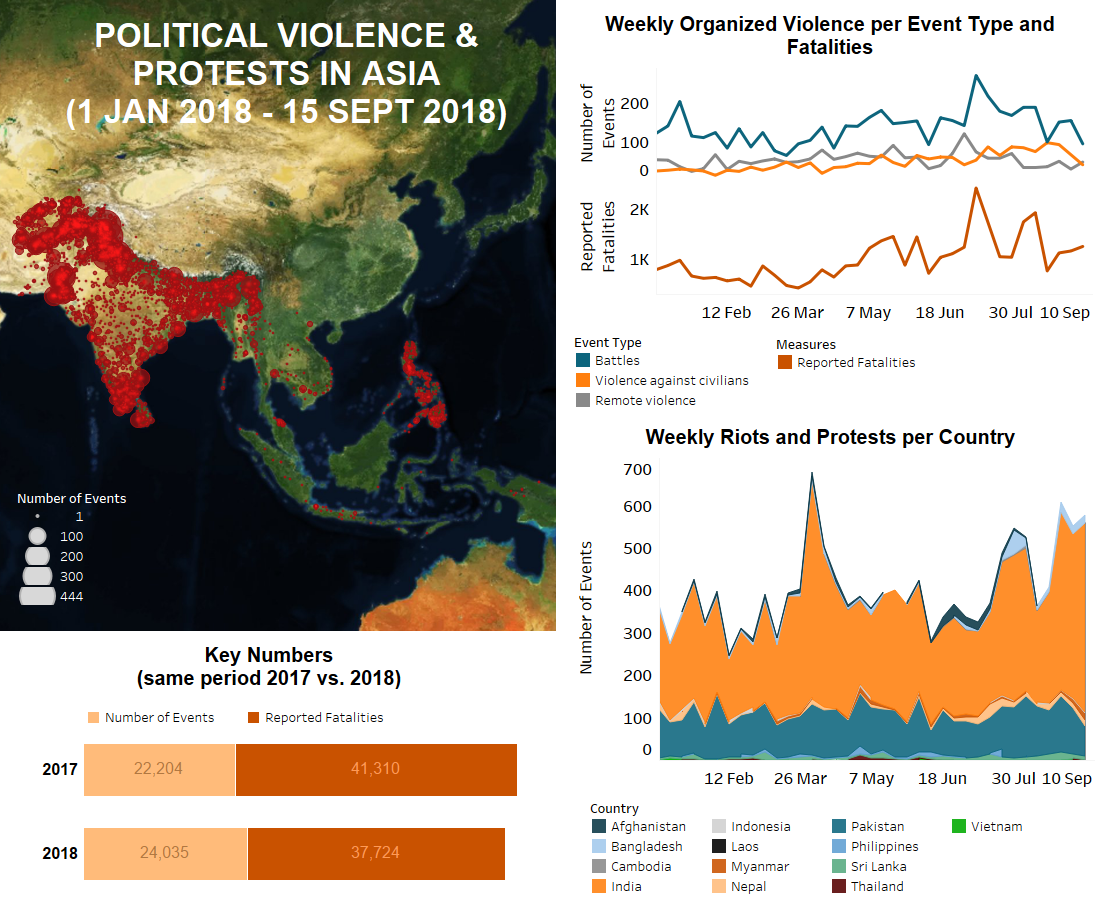